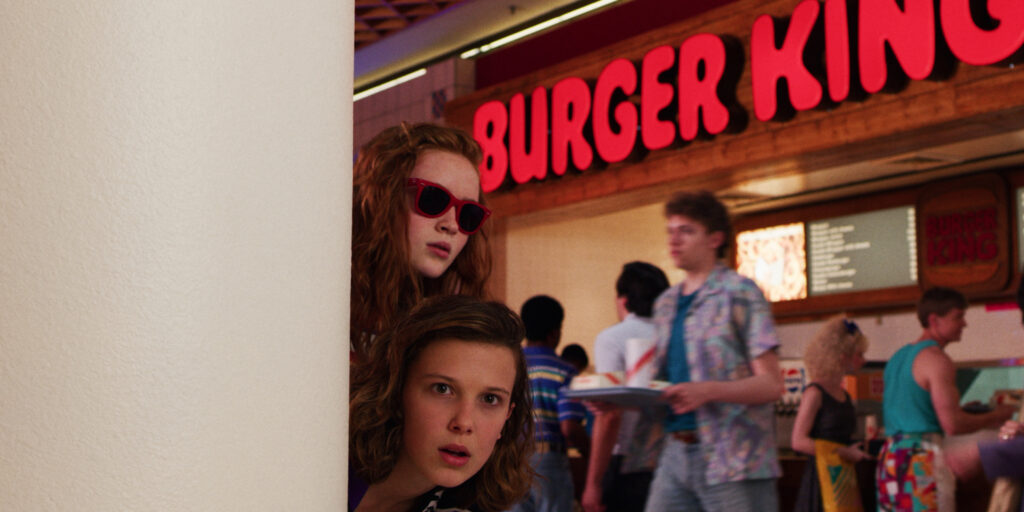 How ‘Stranger Things’ made the Starcourt Mall

No doubt about it: The Starcourt Mall is, like, totally awesome.

In the latest season of “Stranger Things,” the newly opened shopping center captivates the residents of Hawkins, Ind. The Starcourt offers everything a Midwestern consumer in 1985 could ask for, and then some: a Jazzercise, an Orange Julius and, oh yeah, a portal to the Upside Down controlled by the Russian military.

Series creators Matt and Ross Duffer understand the potent nostalgia of the 1980s, and part of what has made the Starcourt the breakout star of Season 3 — along with newcomer Maya Hawke — is the throwback thrill of revisiting the heyday of the American mall.

Once bustling temples of consumerism and popular gathering places for suburban teens, hundreds of malls across the country have closed and many more are in jeopardy thanks to online retail and other economic forces. Like other abandoned places, these ghost malls have become objects of curiosity.

One of these struggling shopping centers, located in suburban Atlanta, was revitalized — at least for a few months — for “Stranger Things 3.” We talked to production designer Chris Trujillo about the enormous task of bring a mid-’80s mall back to life for the latest season of the sci-fi horror series.

This season was filmed at Gwinnett Place Mall, a shopping center in suburban Atlanta that has seen better days.

Trujillo knew that building a set from scratch would be prohibitively expensive, so he spent weeks scouting the Atlanta suburbs for an existing space he could transform into the Starcourt.

“You’d be shocked at the number of malls, particularly derelict malls, in the area,” said Trujillo, who eventually settled on Gwinnett Place, which opened circa 1984 and was once a major attraction for shoppers across the state but has since fallen on hard times. “It’s a massive mall that’s slowly been collapsing on itself for probably the 30 years it’s existed.”

While still operational, much of the mall was vacant and “in a state of almost complete disrepair” when they began to prep for Season 3 last year, Trujillo added. “It’s a very sad, kind of abandoned feeling.”

The empty space felt immediately right for the period setting — and the Duffers’ filmmaking style.

Trujillo knew he’d struck gold when he saw Gwinnett Place. The show ended up filming in an area that had been the food court, a “soaring atrium space with this early [to] mid-’80s angular architecture” with vaulted geometric ceilings. Though the space had been painted over and “terrible ’90s hotel carpeting” had been installed, “You could see the echoes of what had been an incredibly ’80s showpiece mall atrium.” Crucially, the open two-story design also meant it “was really going to work for the dynamic camerawork the Duffers like to do.”

The production gutted and rebuilt about 40 stores and restaurants.

While other areas of the mall remained open to the public, “Stranger Things” took over an area filled with empty, derelict retail spaces. It was “a real messy situation,” as Trujillo described it: “Imagine a mall without stores and without decoration. We had to painstakingly re-create the facades, all of the signage, all of the storefront displays. In many cases we had to reconfigure the storefront architecture because it was in disrepair or it had been piecemeal remodeled through the years.”

They also created a movie theater facade and a number of kiosks in the atrium. The most fun part of the project was probably the Scoops Ahoy shop, which they got to build from scratch. “It was our special little baby.”

It was a massive undertaking. At the height of the frenzy, about 80 people worked for a month and a half creating the Starcourt Mall, Trujillo estimated.

One of the most difficult tasks was figuring out which stores would have been in an Indiana mall in 1985.

Trujillo said the Duffers specifically wanted to included the fictional Scoops Ahoy ice cream parlor, as well as a Gap and some approximation of a Glamour Shots photo studio. Beyond that, it was largely up to him to decide which stores would be featured at the Starcourt and serve as “hero locations” for the characters.

This required research — a whole lot of it. With help from set decorator Jess Royal and art director Sean Brennan, Trujillo went on a deep dive into the history of the malls in America. The goal was to determine which “quintessential mall stores” shoppers might have found in 1985 in the Midwest. It was a complicated task, since “the nature of malls is they’re constantly changing,” but also an enjoyable one. “You inevitably end up down these rabbit holes reading about mall theory and the nature of consumerism in the late ’70s.”

Even though he tries to avoid internet scrutiny, Trujillo was “painfully aware of the fact that each frame is being picked apart by someone who is obsessing over the details” and looking for anachronisms, he said. “We definitely feel under the microscope, especially when it comes to getting these really specific period details in a space like a mall where everybody has a memory of it.”

One problem? Glamour Shots wasn’t a thing in 1985.

“The Duffer brothers had this idea for an Eleven and Max montage where they’re running around shopping where they did a Glamour Shots photo shoot, which would have been a really fun beat in the story,” Trujillo explained. “But with a little bit of internet research you’ll figure out it didn’t exist in middle-American malls until later in the ’80s.” So they figured out a workaround by giving their portrait studio a different name.

Even the stores that weren’t on camera were fully stocked and finished.

Though viewers only see the facades of many stores in the mall — which includes a Radio Shack, a Waldenbooks, a Claire’s Accessories and a Time Out Arcade — they were nearly all fully finished and camera-ready. This was so the production could accommodate “any crazy ideas” the Duffers might come up with as they put the finishing touches on the scripts, Trujillo said, and so the space would read as a mall with storefronts full of merchandise that would invite lots of window shopping.

Trujillo called on his experiences as a ’90s mallrat.

The production designer grew up in Tampa, Fla., “which is its own very specific, suburban world,” he said. He worked two mall jobs as a teenager — at a Florida department store called Burdines and a candy store called the Sweet Factory. “There is a homogeneity to the architecture of malls. They’re all calibrated to be similar spaces. We had to be somewhat specific about the regionality [in ‘Stranger Things’], but I definitely brought a lot of my childhood and teenage memories of hanging out and working in malls.”

When “Stranger Things 3” wrapped late last year, the Starcourt was left intact, Trujillo said. There was talk of opening a “Stranger Things” experience, but it didn’t pan out, and the Starcourt shops have been broken down and packed up. The real-life mall is still there, operating at diminished capacity, but an investor may convert it into — of all things — a cricket stadium.

The Starcourt taps into present-day nostalgia for mall culture.

Trujillo thinks it’s exciting for viewers to visit the mall in “Stranger Things” because “we’ve become detached from those spaces.”

Malls had a negative effect on mom-and-pop businesses and downtown shopping districts, a subject explored this season in “Stranger Things.” But they nevertheless provided “a place where people physically interacted in real time and real space and had these consumer adventures together,” he said. “More and more millennials are without that experience, they’re alone, shopping online.”

Malls represented “a communal good time. More and more that’s falling by the wayside,” he added. “It’s fun to see that blind capitalist optimism in full swing where no one is feeling guilty about the good time they’re having.”