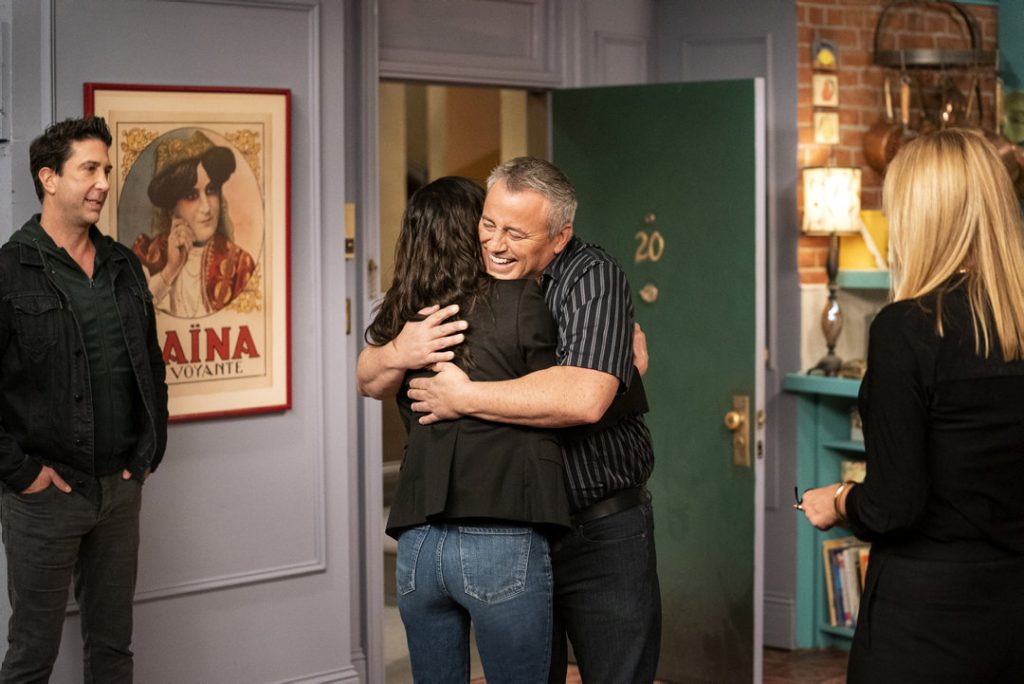 Toward the end of HBO Max’s “Friends” reunion special, host James Corden asks the six actors to imagine what their characters’ lives would be like today.
Chandler and Monica would be married. So would Ross and Rachel. With kids, of course. Same with Phoebe. The only mystery was Joey, which actor Matt LeBlanc answered with a joke.

“He probably opened up a sandwich shop in Venice Beach,” he said.

That’s when the disappointment of “Friends: The Reunion,” which premieres Thursday on the streaming service, hits you. How cool would it have been to take that journey?

It is what ultimately matters when anybody reunites with friends so close they felt like family during the early adult years. How has everyone turned out? Were dreams fulfilled? Did life’s inevitable disappointments cut you down or make you stronger? Can you still be friends?

There are probably many reasons why the people involved didn’t try to advance those stories. It would have been hard. Surely not everyone would have been on the same page. There’s always the possibility of failure. You want to remember the magic of “Friends,” not the slog of the spinoff “Joey.”

Actress Lisa Kudrow noted the show’s creators, Marta Kauffman and David Crane, have said they worked hard to give every character a satisfying ending when the NBC sitcom went off the air in 2004. She hasn’t considered revisiting Phoebe.

“I don’t want anyone’s happy ending to be unraveled,” she said.

Instead, the characters remain frozen in time, forever as they appear on reruns available on, yes, HBO Max.

The streamed reunion was delayed for a year due to the COVID-19 pandemic. Each of the actors reportedly received $2.5 million to appear in the special, according to Variety. Viewers were told it was only the second time that Kudrow, LeBlanc, Jennifer Aniston, Courteney Cox, Matthew Perry and David Schwimmer had been in a room together since filming the series finale.

It has an enormously effective opening. A door opens at an empty Warner Brothers soundstage where the old “Friends” set was in place. Schwimmer walks in alone, shaking his head at what he sees.

He’s followed, one at a time, by Kudrow, Aniston, LeBlanc, Cox and, finally, Perry. Tissue is produced for Aniston and Cox’s tears, and it wouldn’t be the last time.

“Does Courteney still have her lines written on the table?” LeBlanc said, revealing a co-star’s secret.

Thus begins nearly two hours of reminiscences, helped along by generous clips and appearances by some of the people who had been on the show. Maggie Wheeler, who played Janice, still has that grating laugh and explains how Perry inspired it.

Corden asked whether any of the young, attractive actors had carried a flame for one another. Aniston explained how she and Schwimmer had a mutual crush in the first season that wasn’t consummated. She feared that their first kiss would be onstage in a scene — and that’s exactly what happened.

“We just channeled all of our adoration and love for each other into Ross and Rachel,” she said.

In an inspired way, the show intersperses the present-day actors reading their lines from the coffee shop scene where that kiss happened, with what was seen on the air at the time.

“I can’t tell you how incredible it is to be here with all of you now,” he said. “We are shooting here in front of the iconic fountain where you shot the opening credits.”

No jumping in the water this time, though.

While the show offers some laughs, smiles and warm, fuzzy feelings, that ultimately grows tedious. By the time Justin Bieber walks out wearing the potato costume that Schwimmer had for a Halloween episode, the nadir is reached.

It’s when you realize that for all the talent involved, “Friends: The Reunion” doesn’t offer much more than television anniversary specials you’ve seen — and forgotten about — before.

“We’re not going to be doing this again in 15 years,” Cox says, trying to emphasize the uniqueness of the reunion, before addressing her former castmates. “But we’re not going to wait this long to have a dinner.”

Now that’s something we wouldn’t mind being a part of.