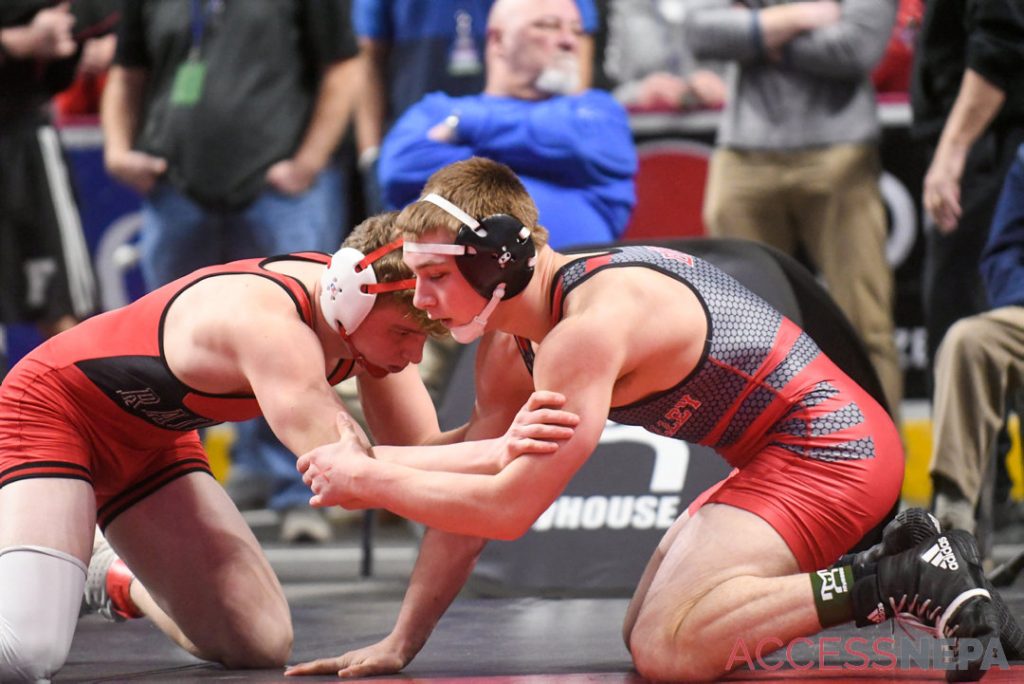 HS WRESTLING: Changes abound on and off the mat

And that barely begins to touch on the biggest difference of them all — the once-in-a-century COVID-19 pandemic that continues to surge throughout the country.

Nevertheless, the local wrestlers will take to the mat while following every protocol necessary just to have a season.

They were shut down from Dec. 10 to Jan. 4 by Gov. Tom Wolf, but now they’re back at it, logging the practice days required before having their first competition.

While other states stayed at 14 weights, Pennsylvania decided to trim the number of starters to 13.

The move was made in an attempt to reduce the number of forfeits during dual meets. It remains to be seen what coaches, wrestlers and administrators think about the change after the season.

With Panther Valley disbanding its program due to low numbers and Upper Dauphin deciding to leave the Schuylkill League in wrestling, some major realignment became necessary.

Upper Dauphin coach Todd Rupp said one of the reasons for the Trojans leaving the Schuylkill League was scheduling. As a member of the Tri-Valley League as well, UDA often had to wrestle a Schuylkill League dual on a Wednesday and a TVL dual on Thursday. Then, the Trojans sometimes would have a tournament or a multi-team duals on the weekend. That’s a lot of weigh-ins.

Rupp has one of his youngest teams ever, with just one senior and two juniors on the roster. Building for the future, Upper Dauphin has 11 sophomores and three freshmen on the varsity.

Junior Dillon Johns (17-7) and sophomore Peyton Wentzel (21-19) are returning regional qualifiers, and the Trojans have 12 returning wrestlers with varsity matches under their belt.

COVID-19 is making life difficult for those who put together the puzzle of who plays who, when and where. Under normal circumstances, it’s quite the chore. Now …

During the preseason, the original league schedule was scrapped and replaced with a slate that included home-and-home duals against the other five teams in your division.

Then the governor shut things down for nearly a month.

Back to the drawing board went the Schuylkill League, emerging with a five-week, five-dual league season that is scheduled for run from Jan. 9 through Jan. 27.

That’s not going to happen as scheduled, since several teams have not yet met the practice threshold to begin competition.

The Schuylkill League also scrapped the individual wrestling championships, instead looking to put together a team championship tournament.

Local programs are leaving no stone unturned to battle against COVID-19.

Still, many wrestlers have opted out of the season, with Pine Grove hit particularly hard.

“If you love your sport, you will do anything to allow you to continue the sport,’’ Tamaqua coach Jim McCabe said during the preseason prior to the shutdown. “The boys have been dealing with the masks very well, and we will continue to work through this crazy time.’’

The senior class that did so much winning as a team broke through to a higher level during the individual postseason. Wiley Kahler and Shane Quick won district gold, and both placed second at regionals to qualify for states. Senior teammate Bryce Gonzalez used fourths at districts and regionals to give the Tide three in the state tournament. Only recurring injuries likely kept Cal Schoffstall from being a fourth senior in Hershey.

Now it’s up to the next group of Tide wrestlers to make their own history. Senior R.J. Quinn (23-20) was sixth at districts, while sophomore Dalton Monger (28-14) made it to regionals. Sophomore Connor Demcher (23-11) is another returnee to watch.

“Our goal is to get as many matches as possible and stay optimistic about the season,’’ Pottsville coach Gary Keener said prior to the shutdown. “We have a great group of seniors to lead the charge in the Schuylkill League, and hopefully we can make some noise in the postseason.’’

Looking to climb the ladder and challenge the Tide is North Schuylkill.

The Spartans won 13 duals a year ago, including the 700th in program history.

They return nine starters from that team and welcome the first wave of a powerhouse junior high team. The past three seasons, North Schuylkill’s junior high team’s record is 39-0. Last February, they finished third overall (first in Class AA) at the District 11 Junior High Championships. Only Easton and Northampton finished ahead of the Spartans in the team standings.

“We have many individuals that are ready to make that next leap and become dominant in their respective weight classes,’’ North Schuylkill coach Corey Fetterolf said prior to the shutdown. “… This year, more than any other year is team oriented, with the elimination of (in-season) individual tournaments. … There are a lot of tough teams in Division I, but we think we can compete with all of them this year, so we are going to keep preparing for the season and see what happens!’’

Blue Mountain, Tamaqua and perhaps Lehighton have enough talent to surprise on any given night in what should be a very evenly matched Division I group. Jim Thorpe has lower numbers and some who did not return this season.

The team to watch is Tri-Valley, which returns eight starters and adds five freshmen. They’re spread out pretty well, enabling the Dawgs to fill most of the weight classes.

“With our increased numbers, we are hoping to be very competitive in the league,’’ Tri-Valley coach Dave Boltz said. “… One of our goals is to compete at the District 11 Duals this year, if we are allowed to go.’’

Both Blue Mountain senior Logan Holland and Halifax junior Bryce Enders made it to states as well. Holland came almost out of nowhere to win eight postseason bouts, finishing fourth at both districts and regionals, and adding one victory at states to finish 26-20. In four postseason tournaments, Enders went 12-7, including a 5-1 weekend for third at regionals. He added a victory in Hershey to finish 38-11.