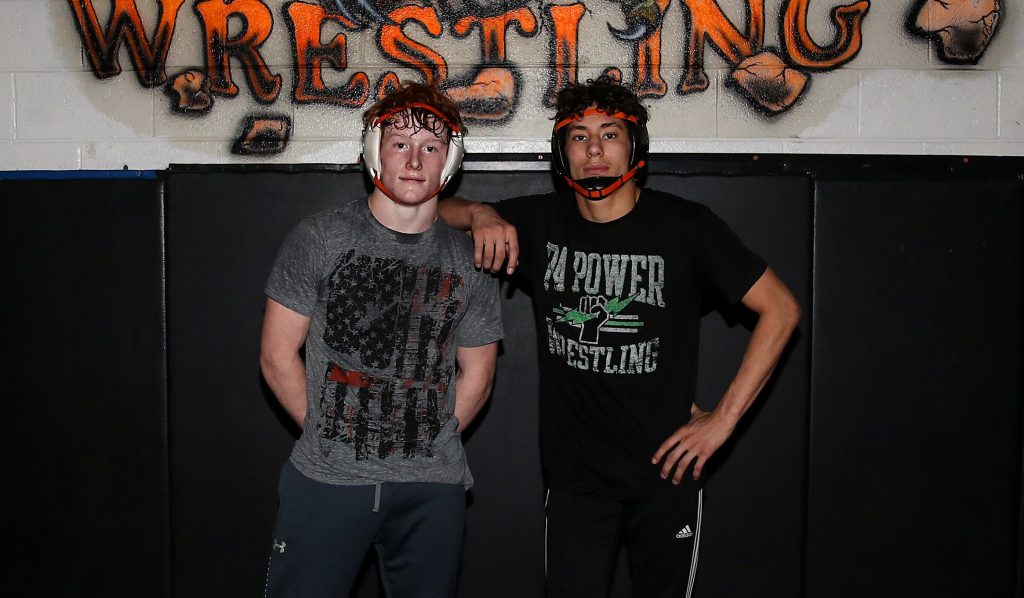 HS WRESTLING: Tunkhannock pair leaning on past experience at states

Tunkhannock’s wrestling season was only two weeks old, but David Evans got his shot against a state champion a few months ago.

The stakes and atmosphere were a few notches lower than that of a PIAA title bout back in mid-December. Evans wrestled Glendale’s Brock McMillen in the finals of Penn Cambria’s holiday tournament at a time when most wrestlers were still getting acclimated to a new season.

Still, it was an early opportunity for the Tigers senior to prove where he stood among one of the state’s top wrestlers. He ultimately fell to McMillen, but only by a 6-1 decision.

“He’s a tough kid. I got in a bunch of shots first period. I just didn’t have the ability to finish,” Evans said this week. “He caught me on my back when I was on bottom. Just simple mistakes cost me the match, but it was a good match. It was good to get that loss in early, and I knew what I had to work on.”

All these weeks later, that’s still the only time Evans hasn’t had his hand raised after a match this season.

If Evans can string together three more wins, he’ll step on the center mat of the Giant Center with an actual shot at a state title this weekend in Hershey. He and teammate Gavin D’Amato are hoping their previous big-match experiences can help place them on the medal stand as their varsity wrestling careers conclude at the PIAA Wrestling Championships. 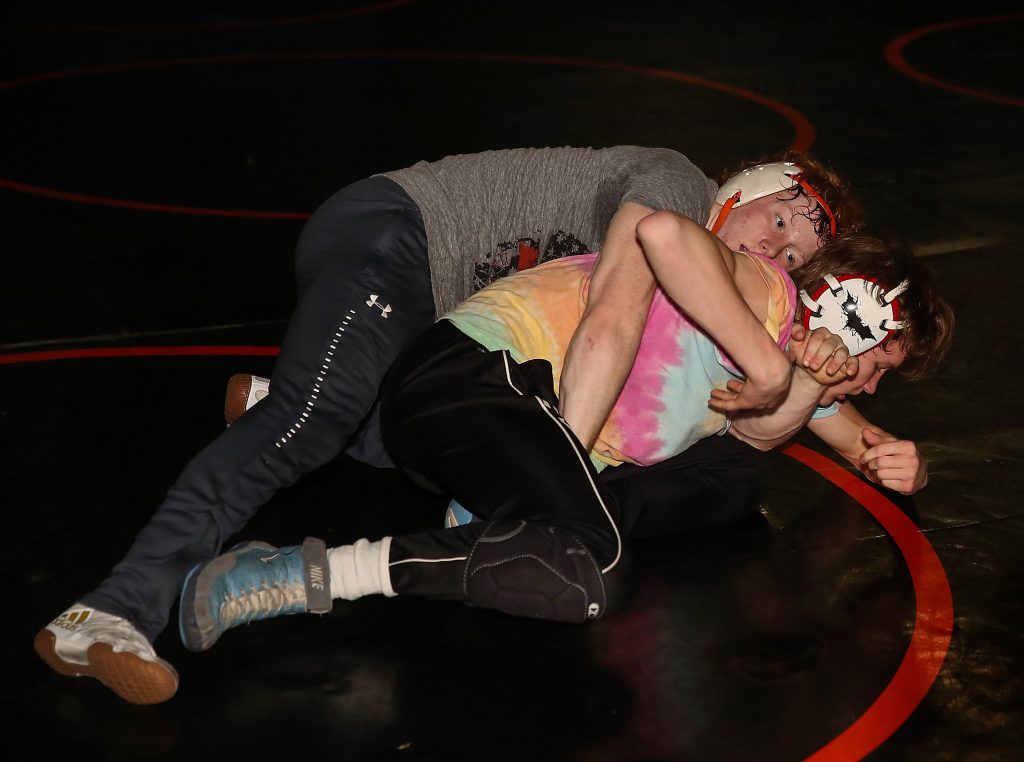 Tunkhannock wrestler Gavin D’Amato (left) works on some drills with Ethan Munley in preparation for the PIAA State Wrestling Championship this weekend in Hershey.

Their Class 2A tournament begins Thursday. Medals are awarded to the top eight finishers in each weight class, elite status that a Tunkhannock wrestler hasn’t reached since Chris Thatcher placed fifth in 1989.

“We’re hoping to just get on that podium or win it,” Evans, the Northeast Region’s 126-pound champion, said. “But I got a tough draw, so we’re just going to take it one match at a time. Hopefully we can get on the podium; that’s the main focus.”

“Even if I don’t place, if I leave it all on that mat. I don’t want to come out of my last wrestling tournament ever with any regrets,” said D’Amato, regional runner-up at 145 pounds. “Hopefully me and Dave can be the first two Tigers to ever place in (the same) state tournament. That would be really cool.”

They’ve both been so close to earning a state medal before.

Evans has twice. He reached the medal-clinching consolation “blood round” in 2018’s Class 3A tournament but lost by four. When the Tigers dropped to the 2A level last season, he again fell in that round by fall — though Evans led in each of the first two periods.

“It’s upsetting. (I was) still coming off an injury, but it happens,” he said.

D’Amato qualified for states for the first time last season and fell a round before Evans. But he led in that bout, too — until he tried allowing an escape and backing away as time ran out, only to give up the point plus a last-second takedown.

As much as they hurt, those experiences could go a long way by the end of this weekend. Evans said he expects the nerves to be at a minimum as he treats his third tournament as a “business trip.” D’Amato’s loss taught him to spend time this season working on his weaknesses as he’s tried to round out his skill set.

“It’s kind of perfect when I think about it now,” D’Amato said. “It made me realize I’ve got to work on top and not get overconfident. I think that helped me a lot this year.”

More key moments have come up this season.

Evans’ loss to McMillen — who’s wrestling at 132 this weekend — was a reminder that he was on the right track. He enters states feeling like he’s at the “peak of my performance.” 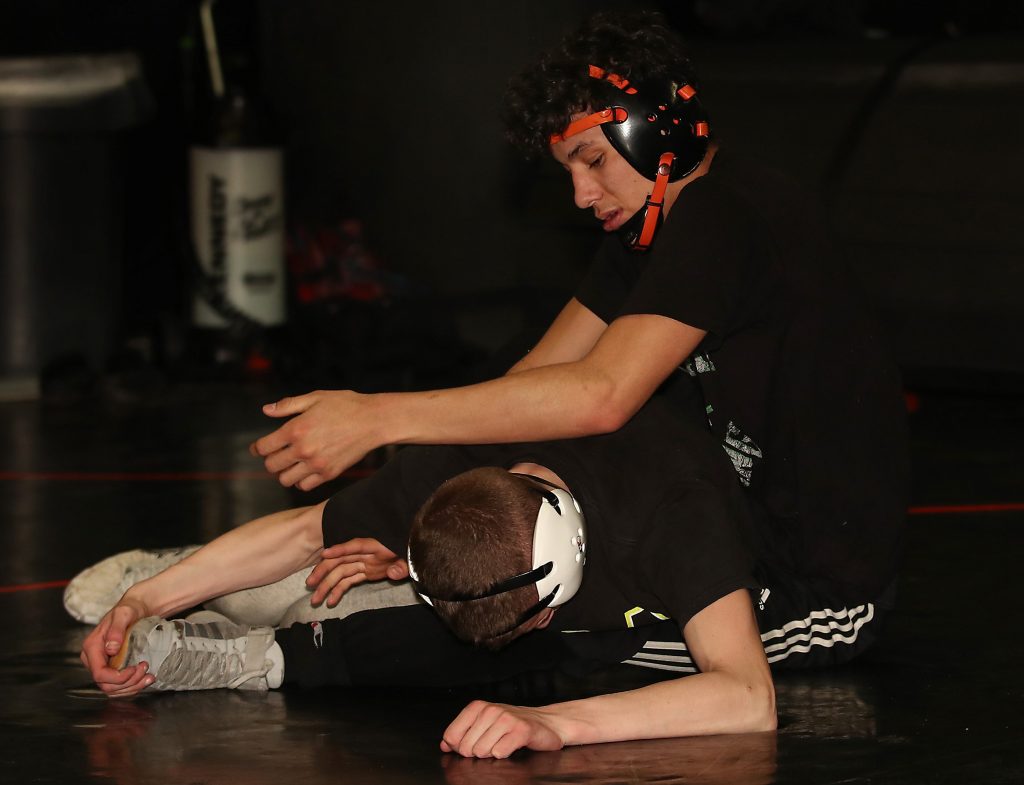 Tunkhannock wrestler Dave Evans (top) works on some drills with Owen Woods in preparation for the PIAA State Wrestling Championship this weekend in Hershey.

D’Amato heads to Hershey just as confident after a series of enormous victories has put him in a much better mentality this time.

A year ago, D’Amato remembers, he opened states against a former qualifier, Berlin-Brothersvalley’s Tristan Pugh, and “froze” at the thought of his opponent. An 8-2 loss dropped him to the consolation bracket immediately.

He’s come around to welcoming challenges like that since then, though. Thursday’s opener against — guess who? Pugh, last year’s sixth-place finisher — is the latest he’s looking forward to.

“I always had a mindset last year that, ‘Oh, this kid’s good,’ and now this year I flipped that. I look at my guy and say ‘Oh my god, this is a good kid,’ and then I get excited to wrestle him,” D’Amato said. “I want to go out there and beat the kid that’s ranked fifth in the state in front of the entire Hershey arena. So I’m really excited and hopefully this year that mentality works.”

At Tunkhannock’s holiday tournament, D’Amato had a rematch with Pocono Mountain East’s Steven Storm. He fell the first time they wrestled after seeing Storm as the guy who beat former Tigers star Tommy Traver; he reminded himself this time, “but I’m Gavin D’Amato.”

The result was a 6-4 tournament title win in sudden victory.

D’Amato believed in himself on the way to another marquee win at last week’s regional, a 3-2 decision over Midd-West’s defending Northeast champion Avery Bassett. He lost in the finals but limited another defending regional winner, Sullivan County’s Nathan Higley, to a 10-4 decision.

Evans and D’Amato are two of the most battle-tested wrestlers among the 16 representing District 2 in Hershey. D’Amato knows what he’s accomplished and doesn’t expect to freeze up again.