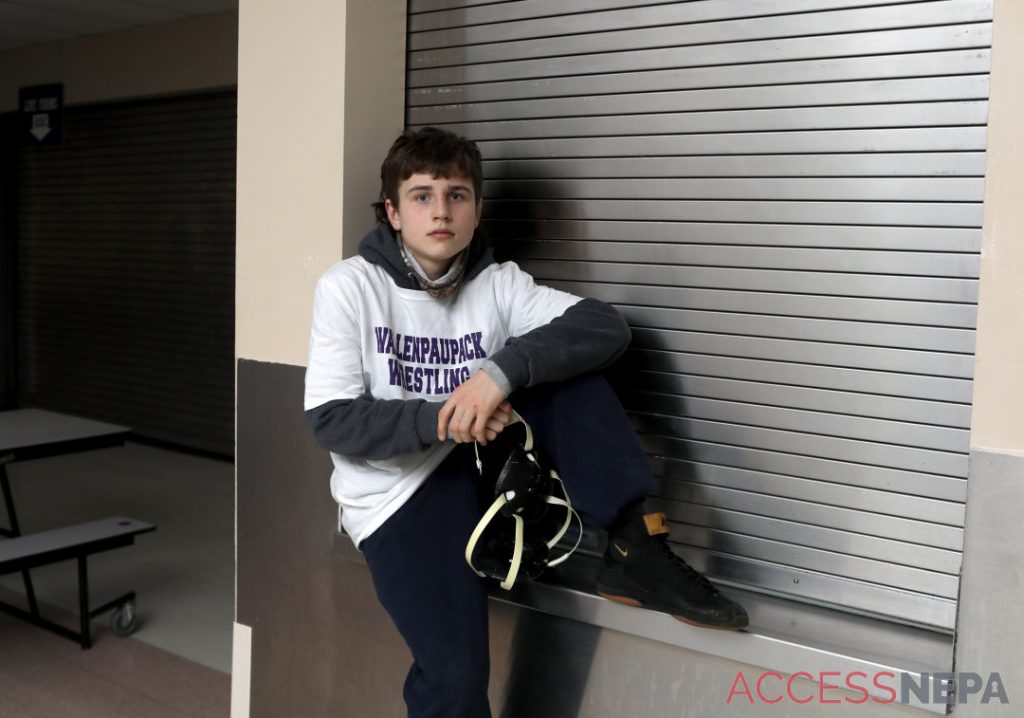 He chose bottom, and looked to at least escape to tie the match.

Win and the Wallenpaupack freshman achieves a rare feat among Lackawanna League wrestlers. Lose and his season ends with a fifth-place match later that day.

Unfazed by the moment, Myers made sure his shocking postseason run continued — all the way to the podium in Hershey.

He secured a reversal against Boyertown’s Jay Maldonado, ranked No. 14 in the state, 20 seconds into the third period. Myers rode him out for the final 1:40 to earn a 4-3 decision in his 120-pound East Super Regional consolation semifinal match last Saturday at Quakertown High School.

“I knew not many people had done it … and that was my goal,” Myers said. “I got the medal. Now I just want to see how high I can place.”

To reach that goal, he also knocked off the No. 1 seed in the bracket, Downingtown East’s Keanu Manuel, ranked 13th in the state, in the quarterfinals. He earned the Super Regional bronze when Manuel forfeited the consolation finals because of an injury. The top eight finishers place at states and each weight class is limited to eight wrestlers — the top four from the East and West Super Regionals — because of the coronavirus pandemic.

Abington Heights’ Evan Craig was the last Lackawanna League freshman to earn a state medal when he placed eighth at the Class 3A tournament in 2007.

“We know it’s special to get a freshman there, but what he’s done in the past two weeks is, in my opinion, in my 20 years of coaching wrestling, other-worldly,” Wallenpaupack coach Steve Krushnowski said. “We know he’s good, but he beat two kids with 100-plus wins who were regional champions last year. It’s just mind-blowing to me.”

With the start of the Lackawanna League season delayed because of the coronavirus pandemic, Wallenpaupack only competed in six regular-season dual meets. Myers went 6-0 with five pins and a forfeit.

With limited varsity experience, Myers entered the District 2 Class 3A tournament as the No. 3 seed at 120. Also in the bracket were state-ranked wrestlers in West Scranton senior Austin Fashouer, who will join Myers in Hershey on Saturday, and Tunkhannock junior Owen Woods, a former District 2 Class 2A champion. Myers needed to beat one of them to advance to the Northeast Regional, which only advanced two qualifiers per weight class from District 2.

Myers lost to Fashouer, the eventual district champion, 7-2, in the semifinals, but dominated Woods, 10-3, in the true second-place match to qualify for regionals.

“I knew Austin was going to be a tough match, but I’ve wrestled him before and it was a tough loss to take, but I knew I had to come back,” Myers said. “I knew Owen was going to be good. He’s a good wrestler, he’s experienced and I just had to take it to him and keep the pressure on him and that’s what I did.”

Myers didn’t allow the bigger stages to shake his confidence. He pinned his Northeast Regional quarterfinal opponent, George Washington’s Stephen Walker, in 45 seconds before dropping into the consolation semifinals, where in a do-or-die situation against Nazareth’s Jake Doone, Myers produced a third-period escape in a 3-3 match to qualify for super regionals.

“(My confidence) really comes from my coaches and my parents just telling me that nobody works harder than I do … and them telling me I could beat anybody,” Myers said.

Myers doesn’t compete in other sports and his work ethic in the classroom shows on the mat.

“I have him in class and usually if a kid is astute in class and he’s a hard worker that usually transfers to everything else they do,” said Krushnowski, who teaches English. “He’s tenacious in the classroom. He works hard. He participates and he’s smart, and it’s such an asset for a kid to be tenacious everywhere he’s at and to be intelligent and to transfer that from the classroom to the mat is huge.”

Ranked 12th in the state, Myers started wrestling at age 6. Years later, he still faces a familiar opponent in Fashouer.

“Him and I have wrestled together with clubs since I’ve been 9, so we both know how each other wrestles, so it’s like a chess match,” Myers said.

This season, Fashouer secured checkmate twice against Myers, but the Buckhorns wrestler only lost by a point at super regionals.

“I definitely learned some things (wrestling Fashouer),” Myers said. “I need to not think about it so much. I know the first match I overthought it a little bit. I thought it was bigger than it was. I think if I wrestle him again, I just need to let it go and just let everything fly and whatever happens, happens.”

Myers opens the PIAA tournament Saturday against Chambersburg’s Karl Shindledecker, the state’s third-ranked wrestler at 120. His side of the bracket also includes No. 2 Dante Frinzi of Bethlehem Catholic and No.6 Chad Ozias of Connellsville.

“He’s been a tournament wrestler,” Krushnowski said of Myers. “He’s done it his whole life, so he doesn’t shy away from the big stage. We tell our kids this year, the whole year you’ve got to make your own juice. There’s no fans. Mom and dad aren’t out there so you really have to get yourself mentally ready to compete, and he’s done a really good job with that.”

The Class 3A tournament is Saturday at 8:30 a.m. at the Giant Center in Hershey.