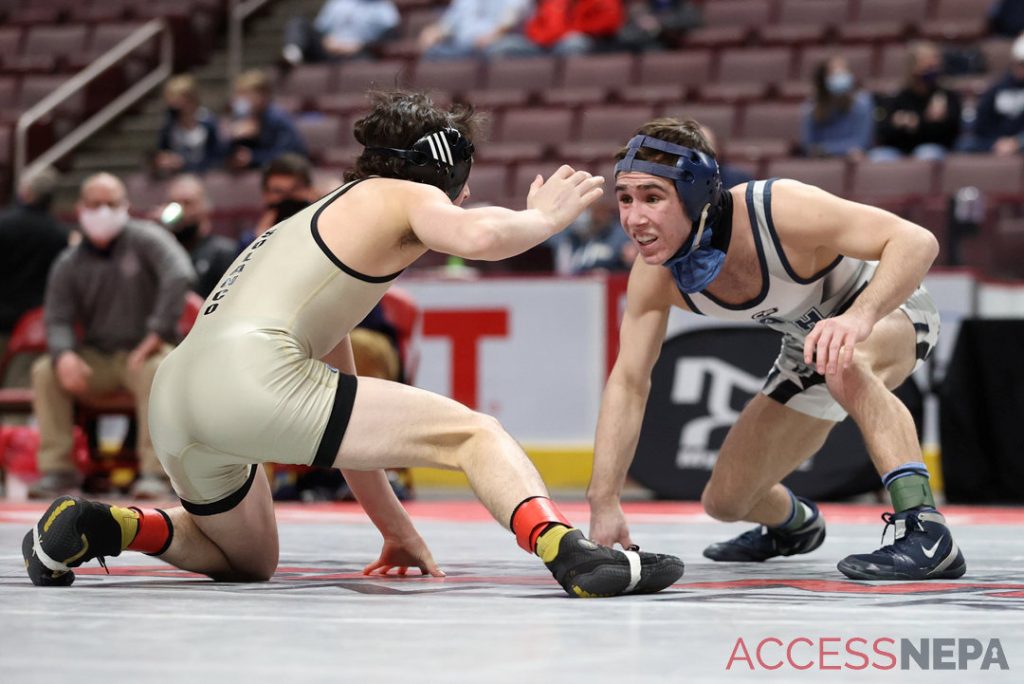 In a season that almost didn’t happen, Lackawanna League wrestlers made history.

Class 3A championships Saturday at the Giant Center in Hershey.

Last year, there was one. The year before that, two.

Jacaruso can walk around looking like Michael Phelps with all the medals he earned this postseason. The Warriors sophomore captured District 2, Northeast Regional and East Super Regional titles before claiming silver at states.

Myers stunned the state with his quick emergence, earning the best finish at states by a Lackawanna League freshman.

Butka weighed in at 199.7 pounds Saturday, and wrestled at 285 all postseason.

He still won. A lot. So much so that he proved the best wrestler in the East at heavyweight.

“I’m going to look back on this for the rest of my life and I’m going to be proud of myself, especially for wrestling these heavier kids,” Butka said. “I don’t regret anything.”

Fashouer had a few more boxes to check in his senior season. He secured a district title and a state medal, the only achievements missing from his illustrious career.

All this during a season of uncertainty caused by the coronavirus pandemic.

First, the Lackawanna Interscholastic Athletic Association delayed the start of the winter sports season two weeks until Dec. 4. Then teams started practice until Gov. Tom Wolf shut down high school sports Dec. 12 in an attempt to mitigate the spread of COVID-19. Wolf lifted the order Jan. 4, but the LIAA kept its start date for league competition Jan. 21.

Shortly after practice started, premier programs West Scranton and Delaware Valley each had a wrestler test positive for COVID-19. Also, North Pocono had to delay its first Lackawanna League season because of the pandemic.

“In the beginning of the season, I thought we were going to get canceled after my team ended up getting COVID for like the first or second time,” Butka said. “I didn’t even think I was going to have a run in the postseason at all. I thought they were just going to call it after our regular matches, but I’m glad it ended up this way.”

Once the season started, most Lackawanna League teams wrestled only league matches.

Despite the shortage of matches and all the delays, the Lackawanna League stood tough against the district and the state. League wrestlers won 17 District 2 titles to the Wyoming Valley Conference’s nine. Delaware Valley won the team title at the Class 3A meet with Abington Heights close behind. Lackawanna Trail demolished the Class 2A field, winning by 87 points.

Some teams aren’t done yet.

Abington Heights travels to Delaware Valley on Wednesday for the District 2 Class 3A team duals championships, while Lackawanna Trail hosts Lake-Lehman in the Class 2A title match for the right to go to the state tournament.

While their masks usually drooped below their noses and mouths during matches, Lackawanna League wrestlers at least tried to wear them. A lot of other wrestlers during the postseason didn’t.

On top of the Lackawanna League success, the district championships moved from the cramped Hazleton Area gym to Mohegan Sun Arena, where fans can follow matches on the scoreboard. Hopefully, districts stay there until the fans can pack the arena.

Unfortunately, the season wasn’t without heartbreak. Lackawanna Trail’s Robbie Schneider didn’t have the chance to compete at the Class 2A East Super Regional because he was a considered a close contact of a person with COVID-19. Western Wayne senior Matt Leslie suffered an injury and didn’t get the opportunity to try to make it back to states in his final season.

However, the Lackawanna League succeeded in a year with everything stacked against it.

“I definitely liked a lot of what was going on,” Sirianni said. “A lot of great friendships built. Me and Zach (Jacaruso) and Austin (Fashouer) were all at the same weight competing last year. Now we’re all separate and we’re all hugging and celebrating for each other so I think we’re building a good thing and I hope that it continues in District 2, it continues to build, but it’s great being a part of that.”