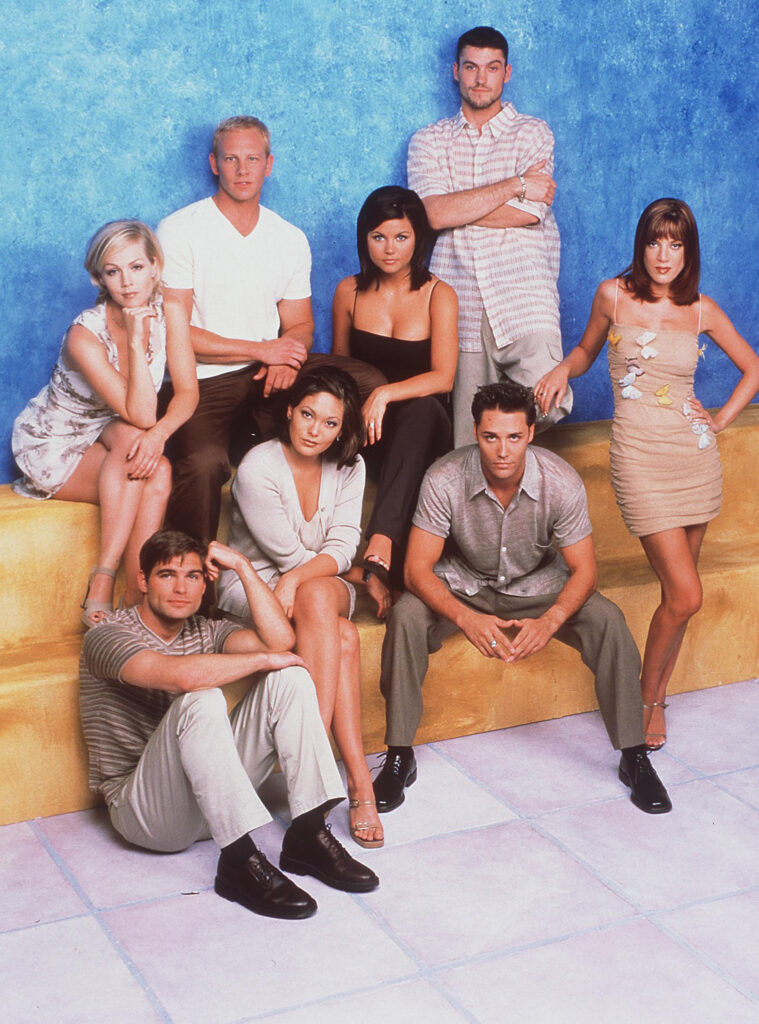 Like most attempts at wrangling old friends for a gathering, this one started with a group text. But those can become a graveyard of noncommitments, so to persuade their former “Beverly Hills, 90210” costars to reunite on the small screen, Tori Spelling and Jennie Garth (aka Donna Martin and Kelly Taylor) opted for a more personalized touch: They made gift bags.

“I was like, ‘Really? We’re giving them gift bags?’” Garth recalls, looking over to Spelling, who concocted the idea.

In the minutes before their formal pitch to the actors at CBS Television Studios, which owns the rights to the series, the duo scrambled to assemble the giveaways. The contents included a snow globe as well as Barbie and Ken dolls haphazardly fashioned to resemble the characters — a Sharpie helped achieve Brandon Walsh’s dark coif and sideburns; one doll’s mane was cut to mimic Andrea Zuckerman’s chin-length bob. Not that it mattered in the end.

“They didn’t even care!” Spelling says.

But the gang eventually agreed to the homecoming that takes TV’s nostalgia bender to blurred vision levels.

Nearly 30 years before “Euphoria” and “13 Reasons Why” were making headlines for their complex, mature portraits of teenage life, “Beverly Hills, 90210” was laying the foundation for the genre as we know it. Its then-revolutionary exploration of the social and sexual drama of high school life became appointment viewing on a then-fledgling Fox and turned its mostly little-known cast into celebrities who incited mall mobs. It aired for 10 seasons and spawned both a successful spinoff, “Melrose Place,” and a CW reboot, “90210.”

Now Kelly, Donna, Brandon, Brenda, Steve, David and Andrea are back on TV screens — sort of. Premiering Wednesday on Fox, the six-episode, mockumentary-style “BH90210” features Garth, Spelling, Jason Priestley, Ian Ziering, Gabrielle Carteris, Brian Austin Green and Shannen Doherty playing heightened versions of themselves as they work to get a reboot of the prime-time soap off the ground. If that sounds more complicated than the Season 4 subplot involving Dylan’s stepsister, think of it as “Curb Your Enthusiasm” meets a “Beverly Hills, 90210” reunion.

“We felt like we needed something different because everyone’s doing reboots,” says Garth, seated next to Spelling during a break from shooting on a recent day. “This show was groundbreaking when it started, so we were trying to think of what could be the new version of that.”

Garth and Spelling, who previously teamed for the 2014 ABC Family sitcom “Mystery Girls,” had been looking for another comedic project to work on together, and, as alumni of a landmark teen soap, the cast has long been followed by questions about a reunion. With the help of Chris Alberghini and Mike Chessler, both of whom worked with Spelling on her meta comedy “So Notorious,” they began hashing out ways to merge the ideas last spring.

The twist, they say, presents an opportunity to spoof the dynamics of coming into — and surviving — fame in the ’90s and to play with fans’ perceptions of the behind-the-scenes drama that fueled gossip columns throughout the show’s run.

“It was before social media,” Alberghini says. “So you’d hear about wild nights at the Roxbury, or whatever was going on. That almost seems quaint by today’s standards.”

The series’ hybrid vision is on display in June during a full day of shooting on set in Vancouver. One moment, the cast members tap into their exaggerated personalities for a scene in which they meet with network executives about the reboot. Later, they’re roaming the halls of Vancouver Technical Secondary — masquerading as West Beverly High — in peak-’90s attire: vests, pleated pants, collared shirts with loud prints and Keds.

Green can’t help but poke fun at it all while making a dash to the food truck near the soundstage during a break for lunch: “Nobody’s going to watch this,” he says playfully. “This is a stupid idea.”

Jokes aside, news of the reboot — and its unusual premise — has drawn mixed reactions from fans: excitement to see their faves, misgivings that it will sully the memory, and plain old confusion about what they’re in for. After all, no one forgets their first TV love. And for many, “Beverly Hills, 90210” was just that.

Ryan Green, who grew up in a Massachusetts suburb, caught on to “Beverly Hills, 90210” in middle school: “I remember I couldn’t believe my parents were letting me watch it.” It helped that it had them hooked too. Green worked hard to make sure she had the latest issues of Tiger Beat and other teen magazines so the posters on her wall were up to date. While she plans to watch Fox’s quasi-revival, her expectations are subdued.

“The first time I heard about it, I was like, ‘It’s not gonna be what I want it to be,’” says Green, 40, who now lives in New York. “The thing is, we know so much about their lives after the show, it would be hard to recapture the spirit of the [original].”

For Lilian Coral, who emigrated from Colombia to Arcadia, with her mom, the original has special resonance. In many ways, it was her primer on the American teenage experience. She recalls the episode when Brenda lost her virginity to Dylan at the Spring Dance.

“I remember that episode set in my mind: ‘Oh, that’s one thing that happens at [a dance],’” Coral, 38, recalls with a laugh. “I can’t think of another show in my high school years that I remember as fondly as this one.”

But Coral doesn’t plan to tune into Fox’s reboot.

“These reunions almost become a throwaway to what it was,” she says. “These very special shows are rare now. And networks can’t come up with these great shows, so they go back to what was good. But it rarely lives up to it.”

As someone who used to turn the ringer on the house phone off to prevent interruptions — and who went on to name her sons Dylan and Luke — Karen Villa, 37, isn’t worried about the series’ legacy or expectations.

“I really was hoping it was going to continue with where the characters are at in their lives right now,” she says. “But I’ll take anything. Just seeing them is going to make me feel 15 again.”

It’s not lost on the cast and producers that fan expectations are high. Episodes will include a healthy amount of Easter eggs — on the day of The Times’ visit, there were references to some of Kelly’s most memorable moments on the show: the fire, the New Evolution, and getting shot at LAX, to name a few.

“It’s a balance,” Spelling says. “We are definitely trying to service the fans and give them what we call ‘fan candy’ … while also making it something new for us.”

It hasn’t been without complications. After initial showrunner Patrick Sean Smith departed the series over creative differences, “Jane the Virgin” veteran Paul Sciarotta — already at work on the series as a consultant — took over, with Alberghini and Chessler serving as co-showrunners.

“There has been some trial and error, certainly,” Chessler says. “Any time you have a lot of people involved in something as big as this, lots of people are going to have strong opinions about assimilating those opinions.”

Sciarotta says that for the first four episodes, the writing staff had one week per episode to break and write the script to keep on schedule. And the actors had a say in creating their fictional alter egos, determining how closely the characters paralleled their real lives.

“We’re talking about making a TV show in our TV show, but we didn’t want it to be too ‘inside baseball,’” Sciarotta says. “We tried to do it in a way that was fun and super entertaining and where we can get big twists and turns out of it. But also … we wanted to make sure that the audience felt that same relatability they felt watching the original.”

“Beverly Hills, 90210” premiered to little fanfare in October 1990 on Fox — just four years into the network’s launch. Created by Darren Starr and produced by prime-time soap king Aaron Spelling, the series revolved around wholesome siblings Brandon and Brenda Walsh (Priestley and Doherty), fish-out-of-water transplants from Minnesota, and their West Beverly classmates. It transformed the way teenagers were depicted on television — largely because it took them seriously.

“I felt that television was really just so in the dark ages with their depiction of teenagers,” Starr, who is not involved with the reboot, says by phone. “I remember with the pilot, the powers that be weren’t entirely sure about a teenage show. There was a lot of emphasis on, ‘Can we see more teachers? Can we see more parents?’ And I was always saying, ‘This show isn’t about them. It’s about the teenagers.’ I think, at the time, they thought maybe it was too small of an audience to appeal to.”

The series was mostly brushed off by critics, but it made steady viewership gains and became an undeniable mainstream success.

“There was no rule book on how to handle fame like that,” Green says.

“I was terrified that once the original show was over, my career was going to be over,” as Priestley remembers it. “The candle that burns twice as bright only burns half as long. But youth is a funny thing. With age and perspective and hindsight, you have the nostalgia for it all. Coming back to it now is actually a lot of fun.”

Cast members, who’ve enjoyed varying degrees of success since, also had varying levels of hesitation about revisiting their career-defining roles. There had been unsuccessful attempts before. Carteris says Luke Perry, who played brooding bad boy Dylan McKay, floated the idea of a reunion when “people weren’t ready to go back,” and Ziering says he tried to get everyone back together for a project timed to Sept. 2, 2010 (9.02.10) that would have involved a dinner and cameras set up around a house: “My pitch fell on deaf ears,” he says.

It makes “BH90210” somewhat bittersweet. The reunion announcement came a day before news that Perry had suffered a massive stroke. He died a few days later at age 52. While Perry had not been part of the announcement — likely because of his commitment to another popular teen soap, “Riverdale” — he participated in the reboot conversations and there was hope that he’d make an appearance.

Without revealing details, producers say Perry’s passing will be acknowledged in the series.

“It’s strange to not have him here,” an emotional Priestley says during a break in filming. “We definitely feel his absence. We will always feel it.”

It explains why there’s a palpable gratitude on the actors’ part — whether on stage or in their numerous Instagram postings — about finding themselves back together after some distance from the show, which was as demanding as it was fulfilling.

“I see everybody every once in a while,” Ziering says. “But for all of us to be in the Peach Pit set together was kind of mind-blowing. It’s one thing to be with my friends, but to be doing this — it brings back the good memories.”