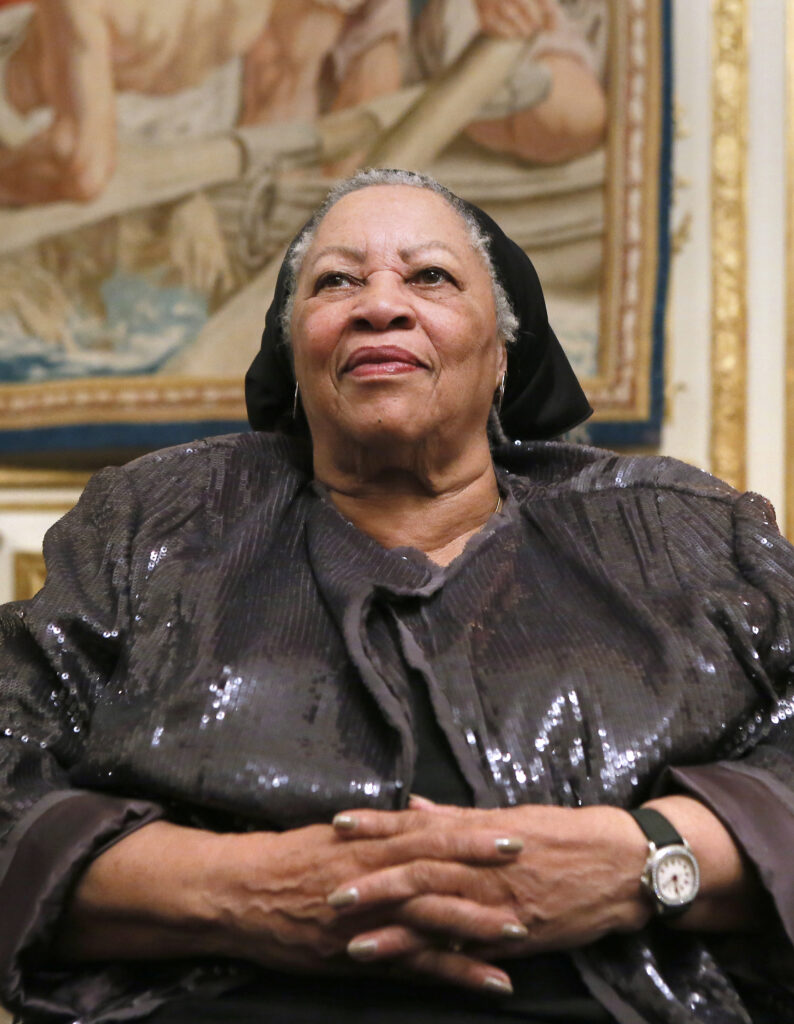 While working at Random House in 1970s, Toni Morrison was known as “the black editor” for her commitment to publishing books about the African-American experience. One of her best sellers was “The Black Book.”

Documenting nearly 200 years of history, its content was as stark as its title. An anthology of artifacts, it featured slave auction notices, lynching photos, black-face advertisements and a fateful clipping from an 1856 newspaper.

“A Visit to the Slave Mother Who Killed her Child” told the story of Margaret Garner, a runaway who, as she was about to be captured, attacked her three children, killing one of them. In explaining her crime, she said death was preferable to captivity.

Morrison wondered what compassion, what love could possibly lead a mother to commit so terrible a crime, and in 1987 answered that question with her landmark novel about slavery, “Beloved.”

With “Beloved” and other writings, Morrison gave voice to the silences in the past and created some of the most memorable characters in American literature. Singing, keening, praising, mourning, laughing, crying and loving, they fill her pages in a resounding chorus that captures the tragic and joyful complexion of life and race in this country.

Winner of the Nobel Prize in literature, a Pulitzer Prize and recipient of the Presidential Medal of Freedom, Morrison was one of the country’s most celebrated writers.

The Swedish Academy praised her novels for their “visionary force and poetic import.” Morrison, the academy said, had an “unerring ear for dialogue and richly expressive depictions of black America.”

In 2012, President Obama called her a personal hero. Her novel “Song of Solomon,” he said, taught him “how to be,” and the late poet and essayist Maya Angelou described her friend as having “the insight of a shaman and the lyricism of a great poet.”

Loved by legions of fans who discovered her work either through the Jonathan Demme film of “Beloved” or through Oprah’s book club which selected four of her novels, Morrison never dreamed of becoming a writer. As she often said, she just couldn’t find the books she wanted to read.

Beginning with her first novel, published when she was 39, she filled the void with an outpouring of fiction, children’s books, a play about Emmett Till, an opera based on “Beloved,” as well as scores of essays and book reviews. Her most recent novel, her 11th, “God Help the Child,” was published in April 2015.

Famous for a magisterial presence with graying dreadlocks, an affection for scarves and a small heart pendant of butterstone — in remembrance to her son, Slade, who died at 45 — Morrison described writing as a “high-wire act,” in which she sought to blur the line between serious and popular fiction.

Long-time friend, Claudia Brodsky remembered Morrison for her uncompromising belief in the power of literature. More than anything, Morrison believed that books have an ethical responsibility to shape society and culture.

“She wanted her readers to be challenged,” said Brodsky. “The goal of literature was not just to challenge you in formulistic or aesthetic ways, but to enhance your imagination. She wanted to enrich their imaginations, to help them look past barriers of the past and see her characters standing in front of them.”

Morrison, Brodsky said, resisted, even resented any tendency to marginalize her work as that of a woman’s writer or an African-American writer.

“She was writing for all people at all time,” said Brodsky.

As adept as she was exploring the complexities of identity and race in her prose, Morrison was foremost an explorer of own identity.

Born Chloe Wofford, she changed her name in college: Toni from St. Anthony, her baptismal name when she converted to Catholicism as a child, and Morrison from an early marriage that ended in divorce.

She didn’t intend for Toni Morrison to be her published name, but when she finished her first book, “The Bluest Eye,” the galley read “A novel by Toni Morrison,” and by then the name had been recorded in the Library of Congress.

She came to accept her twin identities. Her public persona, she claimed, was Morrison, but when she wrote, she became Wofford, the child who lived in a world of inequality.

“In order for her to be Toni Morrison,” said friend and poet Nikki Giovanni, “she had to invent Toni Morrison, so she could become who she is and who she wants to be, not who others want her to be.”

Chloe Ardelia Wofford was born on Feb 18, 1931. The second of four children, she grew up in Lorain, Ohio, a small industrial town west of Cleveland. Morrison described Lorain as “neither plantation nor ghetto,” a place where segregation was enforced not so much by laws but by understanding.

Her parents were fierce in their convictions. When the family went on public relief, her mother wrote President Roosevelt to complain about the meals, and when the new movie theater opened in Lorain, she made her children sit where the white children sat.

Morrison went to Howard University in Washington, D.C., where she was exposed to segregation in public transportation and high schools. She studied classics and joined a troupe of actors, who while traveling in the South, stayed in colored motels or in the homes of Zion or Baptist congregations.

In later years, she taught at Princeton, inspiring a new generation of writers with the moral imperatives of literature.

“She was a chess player,” said her student, novelist David Treuer. “People don’t talk about that. They talk about her lyricism, her vernacular. They don’t often talk about her intellect — and the war she waged on the received PERCEIVED? notions of being African American.”

In 1957, she married Harold Morrison, a Jamaican architect. They broke up when her first son, Harold Ford, was 3, and when she was pregnant with her second son, Slade Kevin. She felt she didn’t conform to her husband’s notion of what a wife should be.

“I don’t think I did any of that very well,” she said. “I did it ad hoc, like any working mother does.”

Her first job in publishing was with the textbook division of Random House. She was 34.

Morrison had considered a life as a dancer, but Jane Austen, Tolstoy, Dostoevsky and Richard Wright changed her mind. Finding time between her boys and her work as an editor, she rose each morning at 4 a.m.

“I used to write with my children pulling on my hair, babies pulling on my earrings,” she said. “My baby once spit up orange juice on my tablet, and I just wrote around it.”

“The Bluest Eye,” initially rejected by two publishers, is the story of Pecola Breedlove, who sees herself as ugly for not being white. Written at a time when “Black is Beautiful” was the rallying cry, Morrison wanted to remember when that wasn’t true, when being black was painful.

In 1968, she moved to New York, where she worked with Angela Davis, Muhammad Ali and Chinua Achebe and honed her own voice as a writer.

As her critical reputation grew, Robert Gottlieb, the editor-in-chief of Knopf, encouraged her to leave publishing.

“You can write ‘writer’ on your tax returns,” he said.

With its simple dedication, “Sixty Million and more,” a reference to the number of black people who died in 200 years of slavery, “Beloved” was as radical as it was profound.

“I certainly thought I knew as much about slavery as anybody,” she told the L.A. Times, “but it was the interior life I needed to find out about.”

“Beloved” was a triumph of the imagination, a book that followed in the tradition of William Faulkner with a story as realized as its prose was incantatory. Imagining the murdered child, Morrison gave words to the ghost who lives in the company of her mother, Sethe.

“I am not dead,” says the child, known as Beloved. “I sit the sun closes my eyes when I open them I see the face I lost Sethe’s is the face that left me Sethe sees me see her and I see the smile her smiling face is the place for me ….”

When “Beloved” was not nominated for a National Book Award, intellectuals and writers protested “against such oversight and harmful whimsy” in a statement printed in the New York Times.

“For all America, for all of American letters,” the letter addressed Morrison, “you have advanced the moral and artistic standards by which we must measure the daring and the love of our national imagination and our collective intelligence as a people.”

Some took exception to the book. Critic Stanley Crouch called it “trite” and “sentimental.” He likened Morrison to P.T. Barnum and objected to the book’s commercialism.

Six years later, Morrison received the phone call from the Swedish Academy. Brodsky recalls how she and Morrison twirled around in an impromptu dance as the reporters waited outside her office.

She was the 11th American writer to win the Nobel.

Not long after the Nobel announcement, Morrison lost her home, a house boat on the Hudson River. A fire consumed drafts of her books, her sons’ school reports, family photos and first editions.

When an interviewer asked her, her eyes filled with tears. “Let’s not go there,” she asked.

In 2010, her son, Slade, died at 45 of pancreatic cancer, and for a time Morrison stopped working. When asked on “Oprah” about his death and how she might find “closure,” she rejected the idea as “some kind of insult.”

She ultimately found solace in her memories, and like so many of her characters she welcomed the ghosts into her life.

While critics were hard on her later novels, arguing that her writing had become too over-wrought and her plots too tangled, Morrison was undeterred.

“What Toni and Maya showed was a willingness to fight for their vision and the courage to create themselves,” said Giovanni.

She celebrated courage in Stockholm at the Nobel ceremony, offering words of encouragement for new generations of writers.

“Passion is never enough; neither is skill,” she said. “But try. For our sake and yours … tell us what the world has been to you in the dark places and in the light. Don’t tell us what to believe, what to fear. Show us belief’s wide skirt and the stitch that unravels fear’s caul.”