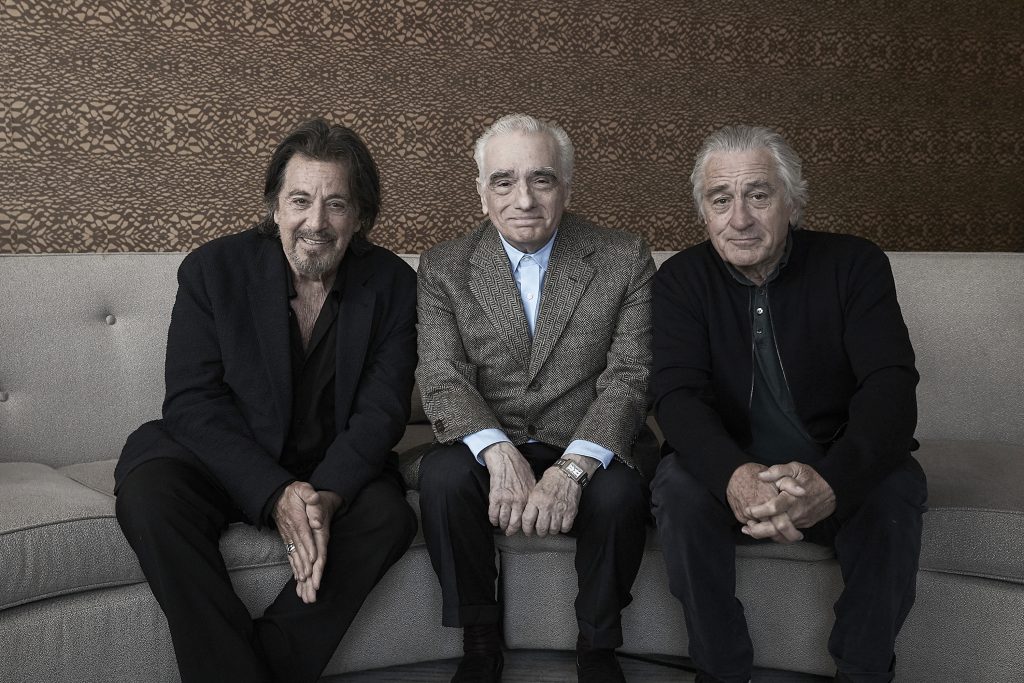 Scorsese, De Niro and Pacino on time and ‘The Irishman’

They come into the room not like the moveable Mount Rushmore that they are but like three old friends, energized by being in each other’s company. They are chatting about movies.

Martin Scorsese comes first, then Al Pacino, then Robert De Niro. They’re trailed by a small army of publicists and assistants that quickly recedes out of the room. Constant through the momentary commotion is Scorsese enthusiastically remembering Michael Powell and Emeric Pressburger’s “A Matter of Life and Death,” and quoting its lines to a rapt Pacino.

Their movie, “The Irishman,” also deals majestically with matters of life and death. Like Powell and Pressburger’s time-traversing afterlife fantasy, “The Irishman” takes the long view on a life, albeit one — that of mafia hitman and Jimmy Hoffa associate Frank Sheeran (De Niro) — less certain to stand up in final judgment.

In Scorsese’s solemnly operatic crime epic, time is one of the three-and-half-hour film’s principle subjects. And in a conversation filled with reflections of the past and uncertainty about the future, time is much on the minds of its power trio. “The Irishman” was made by 70-something Hollywood legends acutely aware that they have only so much of it left.

“As they say in the movie, it’s gonna happen. We’re all human. We’re gonna die,” says Scorsese. “The contemplative nature of it has to do with an accumulation of detail. Details, details. It’s a good thing for our culture to be able to take the time and experience it. You may like it, you may dislike it. But things move so fast now. We see the result of that in what’s happened to our country. We get a soundbite without context. People are too busy. 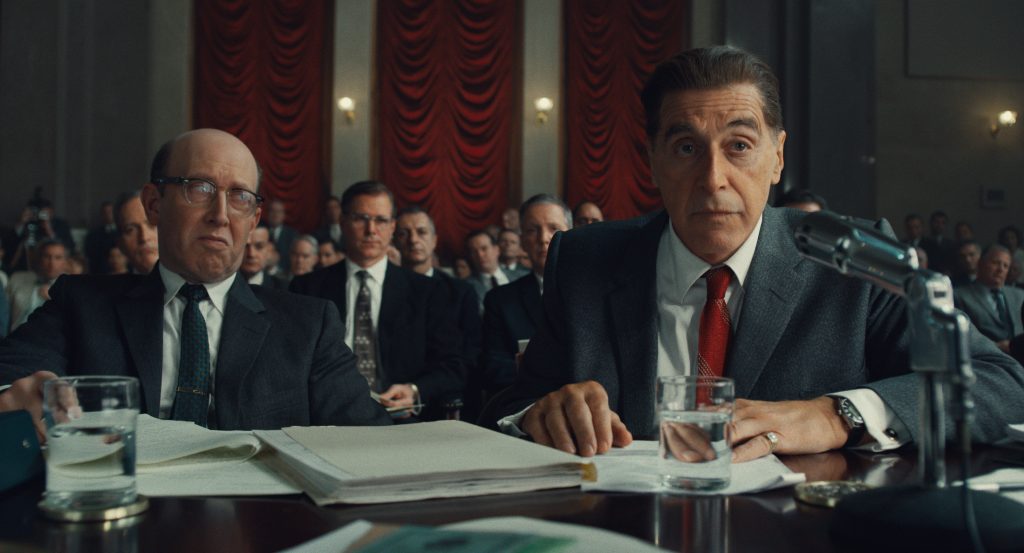 NIKO TAVERNISE / NETFLIX VIA ASSOCIATED PRESS
Al Pacino, right, appears in a scene from “The Irishman.”

“The Irishman” was pushed from the start by De Niro. He was attracted to Charles Brandt’s book about Sheeran, “I Heard You Paint Houses,” and saw in it the potential to give a more ruminative spin on the organized crime genre that he, Scorsese and Joe Pesci (who plays Mafia don Russell Bufalino) are so intertwined with. It took more than a decade to make it happen, and only then did it get traction thanks to improving digital de-aging effects that stretch the actors’ performances across decades, and because of Netflix’s backing of a film that ultimately cost $159 million to make.

But, for them, the long wait was worth it.

“We couldn’t have asked for anything more. Period. That’s it,” says De Niro.

“It really was an exceptional kind of situation. It was funny. Marty, there, Bob. It was so easy. It’s what we do,” agrees Pacino.

Their names ring out with a phonetic symmetry but it would be hard to find three more rhythmically different people. Scorsese’s ferocious verbosity hasn’t dimmed even slightly with age. Pacino, ever-eager to improvise, is more prone to slapdash riffing. De Niro is, as per his reputation, more taciturn. But the main thing they had in common on a recent fall day, shortly after “The Irishman” earned ecstatic reviews at the New York Film Festival , was a simple joy at being together. They look like aged robbers who just pulled off the heist of their lives.

Scorsese and De Niro, of course, have a long-running collaboration numbering nine feature films. But it’s been a while, 24 years since “Casino.” And Pacino has, despite the odds, never made a film with Scorsese. He compares the experience to walking a high wire “only Marty was the net.”

They’ve been close to working together before. 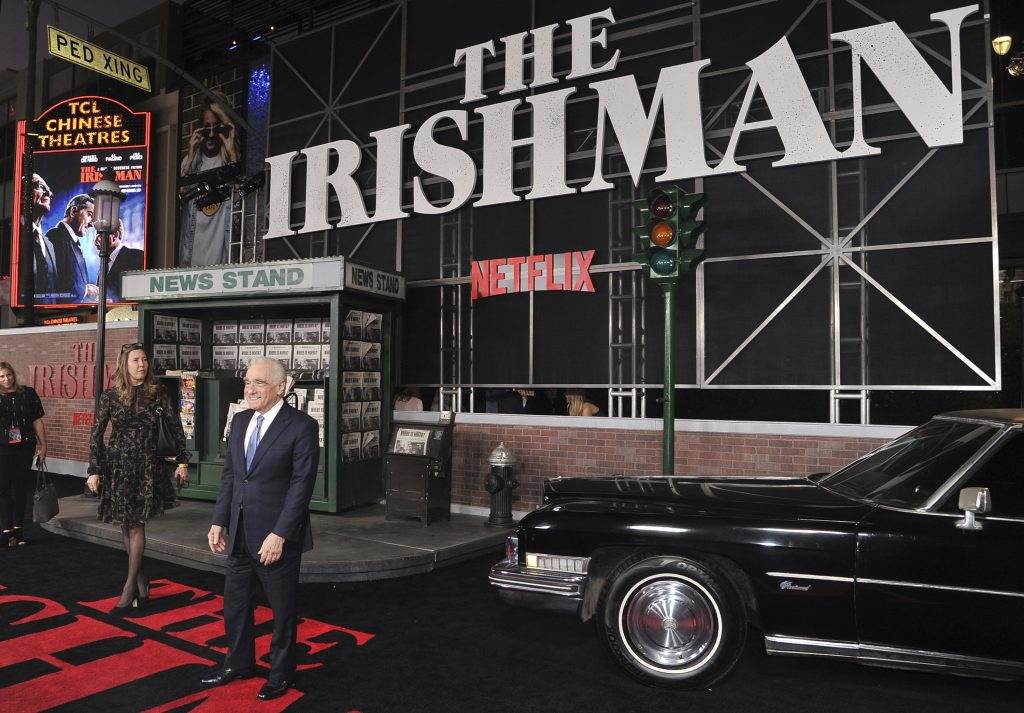 “Al, I always wanted to work with. We met through Francis Coppola,” says Scorsese. “By the time other projects came up, I didn’t have the cachet, or certain types of stories, you had already covered the territory, like in ‘Scarface’ or ‘Carlito’s Way.'”

“The big one I wanted to do — there was a lot of them — was the Modigliani,” says Pacino, referring to an unmade biopic on the Jewish-Italian painter and sculptor.

Scorsese grants that that script was good, but he reminds Pacino that he spent much of the 1980s struggling to find studios to support him.

“What happened is that the whole industry changed,” says Scorsese. “We opened ‘Raging Bull’ nine or ten days before the same studio, UA, released ‘Heaven’s Gate.’ And then ‘Heaven’s Gate’ was closed by one review from The New York Times and that was the end of what’s derogatorily, unfortunately, referred to as the ‘auteur’ cinema of America. It was destroyed.”

Scorsese goes on to recall the difficulty he had in getting “The Last Temptation of Christ” made. It was initially canceled a few weeks before shooting was to start. “I took that as a voice shouting out to me, ‘Leave Los Angeles!’ So I came back to New York and started over again.”

“I saw that at the Ziegfeld. Amazing!” says Pacino. “They don’t have the Ziegfeld anymore.”

The loss of the grand midtown movie palace is far from the only thing that’s changed for filmmaking in the intervening years. “The Irishman” is Scorsese’s second film this year with Netflix and, as he has repeatedly proclaimed, they were the only ones willing to pay for it. His consternation with an increasingly blockbuster-dominated Hollywood has been a focal point in the release of “The Irishman,” drawing the movie into a wider debate about today’s movie landscape.

Scorsese’s strongest belief is that cinema should be about more than placating fans.

“It’s all been about servicing the audience and not challenging them. Challenging a bit — maybe more than a bit — enriches the audience. And it enriches our children. Don’t make the audience adolescent or childlike. The audience is ahead of you,” Scorsese says. Pacino and De Niro nod.

Netflix will release “The Irishman” for a three-week exclusive run in theaters, including showings at Broadway’s Belasco Theatre. It will begin streaming Nov. 27. The movie is expected to be an across-the-board awards contender, giving Netflix another chance at its first best picture winner.

“The Irishman” is a decidedly more somber and elegiac approach to the gangster film than “GoodFellas” or “Casino,” one that comes out of their own reflections on life. “It may be in dialogue with those films,” grants Scorsese. “‘GoodFellas’ is on one level and ‘Casino’ takes it another level. And that level ends it, in a way, at the end of ‘Casino.’ It’s the end of that time and that enthusiasm for that world.”

More than those films, “The Irishman” suggests a world outside of lives dedicated to greed, brutality and corruption — a world lost to its characters but not to De Niro, Pacino and Scorsese. When they see each other, they say, their conversation isn’t really much about movies.

“We talk about our kids,” says De Niro.

“And: ‘How do I get a doctor in this city?'” adds Pacino as they all cackle.

“That’s the other thing!” Scorsese exclaims. “Doctors, medication. Oh, you’ve got that, too! Oh no!”