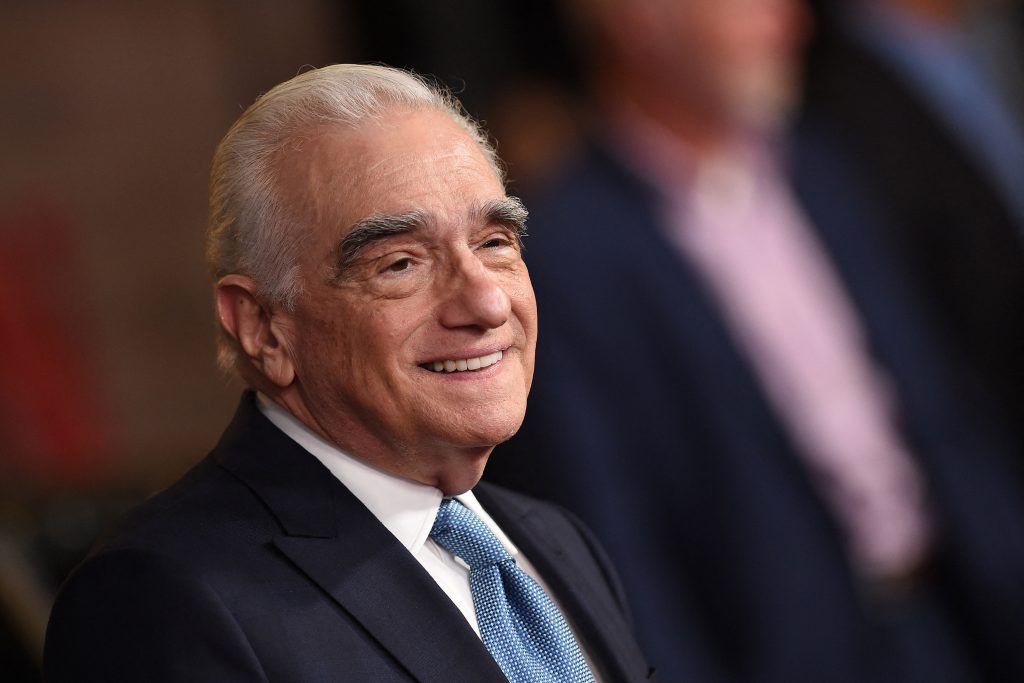 For Scorsese, making ‘The Irishman’ was about ‘learning to die’

Martin Scorsese knows them well. Men in suits with gleaming hair, whispering violence. They are older now, their voices smoke-cracked and bruised. They walk as if their bones no longer fit. They feel the weight. The inevitable. In film after film, they have killed. But now, like the director himself, they glimpse mortality and wonder, somewhere between reckoning and redemption, how it all came and went so fast.

Scorsese’s movies tread between the sacred and the brutal. Bibles written by fallen saints and wiseguys. What is the cost of desire? Who is a man stripped to his essence? Can absolution be granted if forgiveness is not sought? His latest film, “The Irishman,” starring Robert De Niro, Al Pacino and Joe Pesci, which Netflix opens theatrically Friday, explores those questions in an intimate parable of mobsters, unions, the sins of a country and the perilous ways our creeds and loyalties deceive us.

His earlier works, including “Mean Streets,” “Goodfellas” and “Casino,” were tales of young men with quick tempers and drawn guns. They lived on vice and played on murder; vicious strivers in a land of dupes. They appear in “The Irishman” but their impetuousness has ceded to wisdom and regret. They have turned wrinkled and gray. Men of wheelchairs, last rites and nursing homes.

The film is a eulogy from a director who waited for a last take on the characters and crimes he has made indelible to cinema.

“The reason it took so long was that I wasn’t going to go back to that world and do that again,” said Scorsese. “I wasn’t going to until I found a certain piece of myself about it. What that is I couldn’t tell you. It has to do with time, change in life, family, children. All of this. Somehow, we got seasoned in a way. Myself, maybe Bob [De Niro] too. After all the fury and all the struggle in life, ultimately it comes down to the leaving of it. It’s learning to die.”

Scorsese is 76. His thick eyebrows are no longer the color of midnight. Dressed in a blazer, button-down shirt, jeans, purple socks and loafers, he sat in a suite as dusk approached. The sky was clear, brilliant, the kind that makes you want another day. A blue with no transgression. He had arrived not long ago from Europe. He settled into a couch, jumping up if something struck him as meaningful or funny; his laugh, a high-pitched whistle, wheezy almost, deepened as it spread across the room.

He mused on the existential, mentioning a novel by the French writer Celine in which a couple is splitting up and a woman holds a gun on her lover. She asks him what happened to him, why had he changed. “He answers,” says Scorsese, “‘what’s happened to me is a whole life has happened to me.’ And then she shoots him.” He pointed to another lesson from “Essays in Idleness” by Yoshida Kenko, a 14th century Japanese monk who wrote that in death we gradually diminish until our name is not spoken and our existence is covered up and lost.

That is the tone of “The Irishman.” Based on the life of Frank Sheeran (De Niro), a hit man who claimed to have killed Teamster leader Jimmy Hoffa (Pacino), the film is a meditation on friendship, devotion and decades of misdeeds that lead less to salvation than to a hollow, flat acceptance of what one has done. While Pennsylvania mobsters fix juries and extort unions, the nation — like a newsreel unfurling in the background — endures the end of World War II, the assassination of President Kennedy and the rise of Richard Nixon.

America plays as if a haunted reverie in a dark heart. Sheeran outlasts friends and enemies. He ends up abandoned in a nursing home, a reluctant repentant with a priest by his side and one eye on a half-open door.

“We’re all equal in one way — whether we’re the president, the clergy, gangsters — we’re still human beings and we still have to face a reckoning,” said Scorsese. “It made it easier to make the film. Strip away all the unnecessary. Down to the bone. This character allowed me to do that.”

The film brought Scorsese, whose “Taxi Driver” in 1976 put him in the vanguard of gifted young filmmakers reinventing Hollywood, into the Netflix universe and the debate over the future of an art form that began more than a century ago. Scorsese entered the world of streaming platforms after no other studios — the Steven Zaillian screenplay was written a decade ago — would finance a 3½-hour movie steeped in 50 years of U.S. history. He felt time ticking. “The movie had to be made,” he said.

Netflix won a coup. A storied auteur of the big screen — De Niro and Pacino in tow — had joined its fold. The company granted him creative control and an estimated $160 million budget that paid for intricate sets and a computer-generated de-aging technique that allowed actors to peel off years in flashback scenes. But the film won’t play in many major theaters and will become available on small screens four weeks later (right before Thanksgiving).

“That’s the compromise I had to go with,” Scorsese said, adding that technology and streaming are forever altering the context and reality of how films are made and watched. To what end he couldn’t predict. “We have a new form here. We didn’t feel constricted by the traditional format for a theater. [It’s] more like a play you go and see for three or four hours. But I hadn’t thought of that. I discovered this as we were shooting. It just felt natural.”

He has been thinking a lot about the evolution of film. He recently compared comic book/superhero movies to amusement park rides that thrilled but did little to illuminate the yearnings and complexities of the human spirit. Francis Ford Coppola followed suit, calling them “despicable.” Marvel fans blasted the two “curmudgeon” filmmakers on social media, and James Gunn, director of “Guardians of the Galaxy,” posted: “Some superhero movies are awful, some are beautiful … not everyone will be able to appreciate them, even some geniuses. And that’s OK.”

“Films have to be made about people who have moral conflicts, have failure in them and success within,” said Scorsese. “They have to be made about humanity. I’m afraid, aside from the fans of those [superhero] films, who are die-hard fans and I have nothing against them, other people, young people, will perceive that’s the world of cinema. They’ll think that cinema was always that way and they’ll lose the richness of the past 120 years.”

Scorsese has contributed to that richness. His films — De Niro draped in a robe and cast alone in a boxing ring in “Raging Bull,” Ray Liotta greasing palms and gliding through a nightclub in “Goodfellas” — are ingrained in us. They endure not only for their beauty and skill but for what they say, how deep they go into those places we know exist but seldom contemplate. The air between bloodstain and penance. The films are American in their grasping and brashness, Catholic in the unraveling of consequences.

Those themes played through much of Scorsese’s work with De Niro. And with Pesci, who plays hushed-voice gangster Russell Bufalino, and Harvey Keitel, reticent mob boss Angelo Bruno. Pacino was new to the mosaic, brought in by De Niro to portray Hoffa, a combustible, corrupt little hammer of a man. Scorsese had wanted to work with Pacino since the two were introduced by Coppola in 1970 but it hadn’t happened.

“What you see in ‘The Irishman’ is who they [De Niro and Pacino] are over the last 45 years. That’s the relationship,” said Scorsese. “I got the feel of how [Pacino] moved, how he spoke. How many tangents he takes off on and comes back to the point.” The director laughed at a scene in which Hoffa (Pacino) tells a courtroom that when a man pulls a gun you charge him, but if he flashes a knife you run away. It is vintage Pacino: a restrained explosion with impeccable timing and a sly cut of eyes.

In his documentary “My Voyage to Italy” (1999), Scorsese traces his love for Italian cinema, especially the neo-realism of directors like Roberto Rossellini, back to a boy with asthma on Elizabeth Street in New York City. He wore dog tags, went to St. Patrick’s school, watched the neighborhood mob guys, and prayed the bombs of the Cold War would not fall. The movies that came through his parents’ black-and-white TV connected him to his ancestry. Those that would come later in theaters brought him images that would echo through his life.

“The emotional, powerful experiences of many of the films I saw were almost unspoken experiences between my father and me, my mother and me, my brother and me,” he said. “Whether it was ‘The Red Shoes’ or ‘Sunset Boulevard.’ We didn’t talk about them much but we experienced some kind of transcendent reaction to these pictures.”

He spoke as if a man, the son of a garment presser, going back — even in this suite on a coast far from New York, where the sun slid down an immaculate window, the shadows stretched long, and a woman waited outside with phones and appointments. Yes, he said, there are other films to be made, but still …

“I know that those times are gone. I’ve taken a journey, so to speak, and wound up here somehow,” he said. “A lot of it comes from my father. Joe Pesci reminds me of him in ‘The Irishman.’ Even in ‘Goodfellas’ when Joe is going to get made but he gets killed instead and Bob goes to the telephone and says, ‘How’d it go?’ And there’s a voice on the other end of the phone, ‘Well, there’s a problem.’ ‘What do you mean there’s a problem?’ ‘Well, he’s gone.’ That’s my father.

“And the way he said that, that’s the whole movie here. He had that tone. There was a finality to it.”