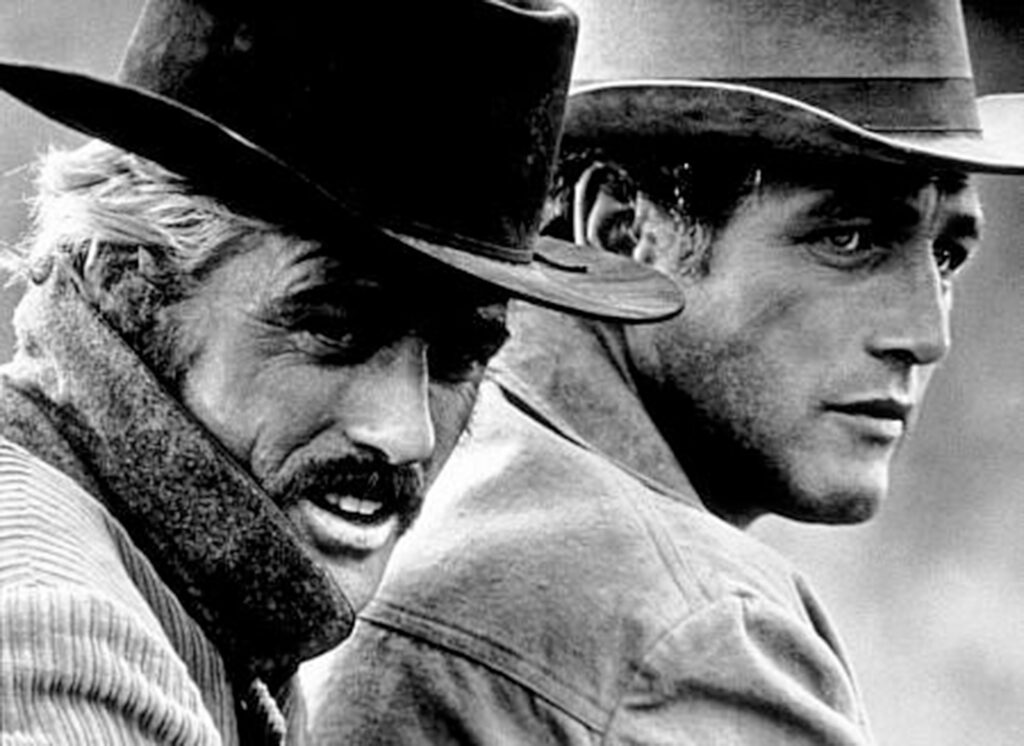 ‘Butch Cassidy and the Sundance Kid’ at 50: Is it a relic or a classic?

A lot of huge movies never become cultural reference points the way “Butch Cassidy and the Sundance Kid” has, in the near-half-century since its fall 1969 premiere.

In the movie, Butch and Sundance spend half their own movie being pursued by a relentless posse. “Who are those guys ?” The outlaws keep asking. The question I’m asking is a little different: Why are those lovable outlaws who photograph so very prettily, still the go-reference in what’s left of modern Hollywood for a certain brand of buddy movie?

Its reasons for popular success aren’t a secret. The movie turned into the biggest box office attraction that year, thanks to Paul Newman (already a big star) and Robert Redford (whose stardom was made by the movie). The sardonic mutterings of William Goldman’s Oscar-winning screenplay, which sold for a then-staggering $400,000, may not have been period-accurate, but the inauthenticity was part of the joke, and the charm. Who cared?

Like his brother, James Goldman, who wrote “The Lion in Winter,” William Goldman appreciated the casual, contemporary-sounding zinger. His was a wise-ass Western. It got by with older viewers who grew up with more sincere, earnest and solemn examples of the genre, as well as with young viewers who enjoyed the jokes and accepted the storyline’s shift from sunny good times to a bloody, if exceedingly romantic, endgame.

The 20th Century Fox theatrical re-release of director George Roy Hill’s picture touted the film as “probably the most entertaining Western ever made!” For some, it was. And for some key Hollywood power players today, the title remains short-hand for a male-dominated, star-propelled, commercial hooks aplenty.

Example A, unlikely as it sounds: Quentin Tarantino’s “Once Upon a Time … in Hollywood,” opening July 26. The writer-director’s ninth feature is set in 1969, the year of Butch and Sundance. It stars Leonardo DiCaprio as a fictional, fading movie star, and Brad Pitt as his longtime stunt double.

Earlier this year Sony Pictures head Tom Rothman compared its appeal, even though Tarantino’s narrative includes the Charles Manson murders, to “Butch Cassidy and the Sundance Kid.” “In the modern movie business you don’t get two-big-star pictures,” he told Deadline. This one, he implied, has some of that Butch and Sundance stardust.

Example B, odd as it sounds: “Green Book.” Last year director Peter Farrelly’s best picture Oscar winner was looking for a distributor. Farrelly arranged for Steven Spielberg to see it. He saw it. He loved it. He hooked up it with DreamWorks, and Universal. And, according to Farrelly, Spielberg told him “Green Book” was his favorite buddy comedy since “Butch Cassidy and the Sundance Kid.”

In any meeting, the mention of Butch and Sundance invokes bromance incarnate and a movie, fingers crossed, with massive appeal. Woody and Buzz in the “Toy Story” franchise may be true heroes and purer souls, but I’d be surprised if the screenwriters and directors of the “Toy Story” movies didn’t take a few cues from a certain wise-ass Western.

Movies have a way of changing on us, as we change across the years. Some we see at just the right age for a lifelong relationship with that film. “Butch Cassidy” was, for me, not that age, not that film. (A year or two later I fell for “The Sting,” another Newman/Redford/Hill project, in ways I never did for “Butch Cassidy.”)

Seeing “Butch Cassidy” recently, it seemed to me the reasons for its success and hardy cultural influence were still there. It’s simple as hell. There’s barely any plot. It’s at least two kinds of period pieces, the first being the period in which the vaguely true-life story is set, the second being 1968 (when it was filmed).

So much about it looks and feels tied to the era of its creation. The zoom shots. “Raindrops Keep Fallin’ On My Head.” The prolonged and pretty appalling rape joke, with Redford forcing Katharine Ross to strip at gunpoint, slowly, quietly, before the punchline comes and we learn they’re consensual lovers. (That scene was sinister b.s. then, and it’s sinister b.s. now.)

It was never a universally praised classic. The film got mixed reviews when it came out. Roger Ebert, in his two-and-a-half star review: “slow and disappointing.” Gene Siskel, in the Tribune: “too cute to be believed … not memorable.”

In the LA Times, Charles Champlin had a much better time, calling it “a writer’s triumph of a movie.” He also avoided making any grand claims for it. “In a year heavy with message pictures, you almost expect (it) to have one as well.” It didn’t. It doesn’t. It’s about Paul Newman on the bicycle, and “Raindrops Keep Fallin’ On My Head.”

And yet, in university screenwriting course after course, professors teach Goldman’s screenplay as a model of the form.

I suppose it is. Maybe. I suppose the film world today is full of people who cannot and will not argue with the No. 1 movie of any year.

Fifty years later, if movies as wildly disparate as “Green Book” and “Once Upon a Time … in Hollywood” can court comparisons (however dubious) to Butch and Sundance, it may simply be an instance of someone is trying to promote a project about two guys on some sort of journey.

“Butch Cassidy” will always exemplify a moment in Hollywood when a movie could straddle the mainstream and the counterculture, for fun and profit. Goldman and Hill borrowed a little from “Bonnie and Clyde” and a little from Abbott and Costello. The movie isn’t about anything but itself, and its stars, and its quippy way of undercutting the characters’ grace under fire.

The movie is, itself, a form of shorthand. No wonder we still call it out when the latest pretender to the Butch and Sundance throne rides into view. The question, now, however is no longer “Who are those guys?” It’s: Can we please make room for more than the latest players in the bromance imitation game?