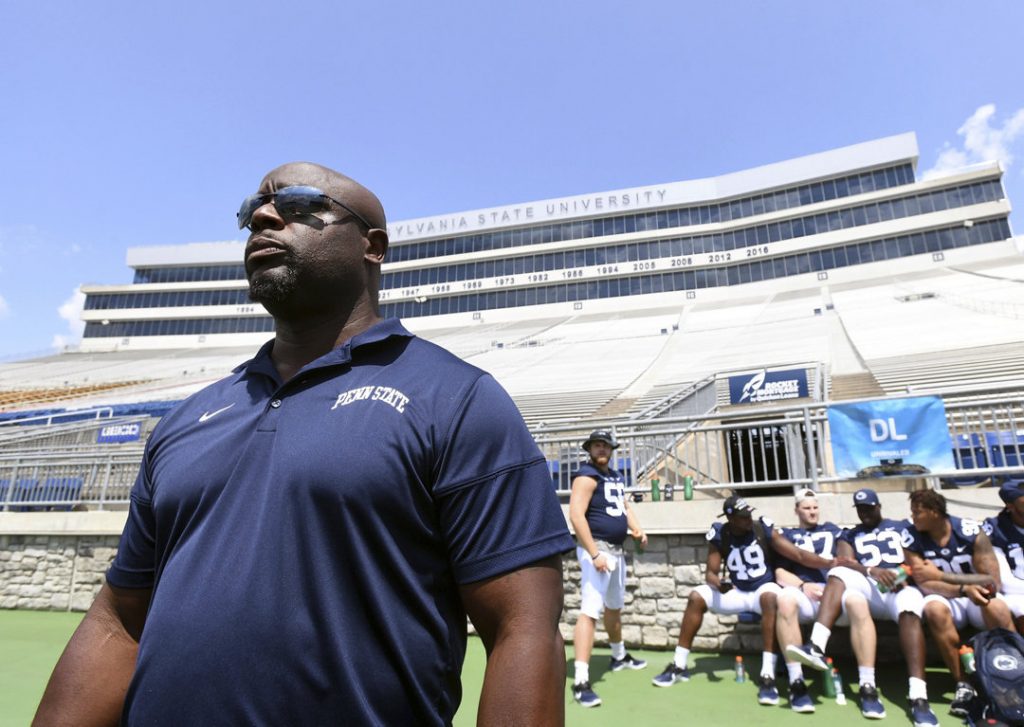 One of the last holdovers from James Franklin’s first coaching staff at Penn State, Sean Spencer’s tenure with the program is over after being hired as defensive line coach of the New York Giants on Friday.  (Phoebe Sheehan/Centre Daily Times via AP)

It’s the way it is in college football these days. Good assistants leave. Every major program deals with it. You’re probably not a major program anymore if you don’t.

Penn State has dealt with it plenty over the years. This offseason alone, three assistants had to be replaced. One, offensive coordinator Ricky Rahne, took a head coaching job. Offensive line coach Matt Limegrover’s contract wasn’t renewed, and receivers coach Gerad Parker got his own promotion — to offensive coordinator at West Virginia — a few days later.

For sure, those moves left players who got close to those coaches a bit downtrodden. Players, after all, work on a far more intricate level with their position coaches than they do their head coach. The relationship at that level is usually much more tight, and when Penn State lost its fourth assistant from the 2019 staff on Friday, it was those relationships that stood out as the aspect of this that head coach James Franklin will have the most difficult time replacing.

Sean Spencer, the Nittany Lions’ longtime defensive line coach, has been hired by the New York Giants as its next defensive line coach. It’s Spencer’s first foray into coaching at the professional ranks, and it’s a well-earned promotion for one of Penn State’s most productive and well-liked assistants.

If the social media reaction of players to Spencer’s departure is any indication, this might be Franklin’s most critical hire of the offseason.

First off congrats coach ???????? This is truly a blessing and great opportunity for you ???????? I just wanna thank you for the impact you had on my life. You was a father figure and helped me develop my game so much in the year we been together. See you soon ????????#WeAre. #Wildogs4Life https://t.co/0D6My2CZt5

“A teacher affects eternity, he can never tell where his influence stops” Beyond grateful for the relationship we’ve built over the the few years, one of the realist individuals I’ve encountered.. See you soon Rasta! ???? pic.twitter.com/FKFovibi0I

Losing your coach is easy for most players. Losing a role model and father figure is detrimental. Love you @SpenceChaos congratulations on the opportunity.I know you always gone have our backs. ???? pic.twitter.com/YIiADeK80e

Since I stepped on campus coach Spence has been like a father to me. I can’t put into words how much he means to all of us, he’s the reason why we’re here. Without him, there is no us. Can’t thank him enough for all he’s done. This one hurts but I’m beyond happy for my OG! https://t.co/qjxI4ZN8rK

Huge shoutout to my coach and mentor!!! Fostered a true brotherhood and brought the intensity every day. Nothing but love and respect ❤️✊????@SpenceChaos https://t.co/ccGCxemGeM

Some people are coaches and some people are fathers! Coach Spence made me feel like I was one of his own children along with many other players he gave us laughs picked us up while we was down! One of realest out! Gave me first chance. Love you dawg until next time. @SpenceChaos pic.twitter.com/nSUemvlgHF

Although my time has been brief with you as a coach, what you have taught me will last a lifetime. It hurts to see you leave but I am elated to see you chase your dreams and move on to positively affect more lives beyond Penn State. Thank you Coach Spence for everything???????? WD4L???? https://t.co/PK8WBBcomQ