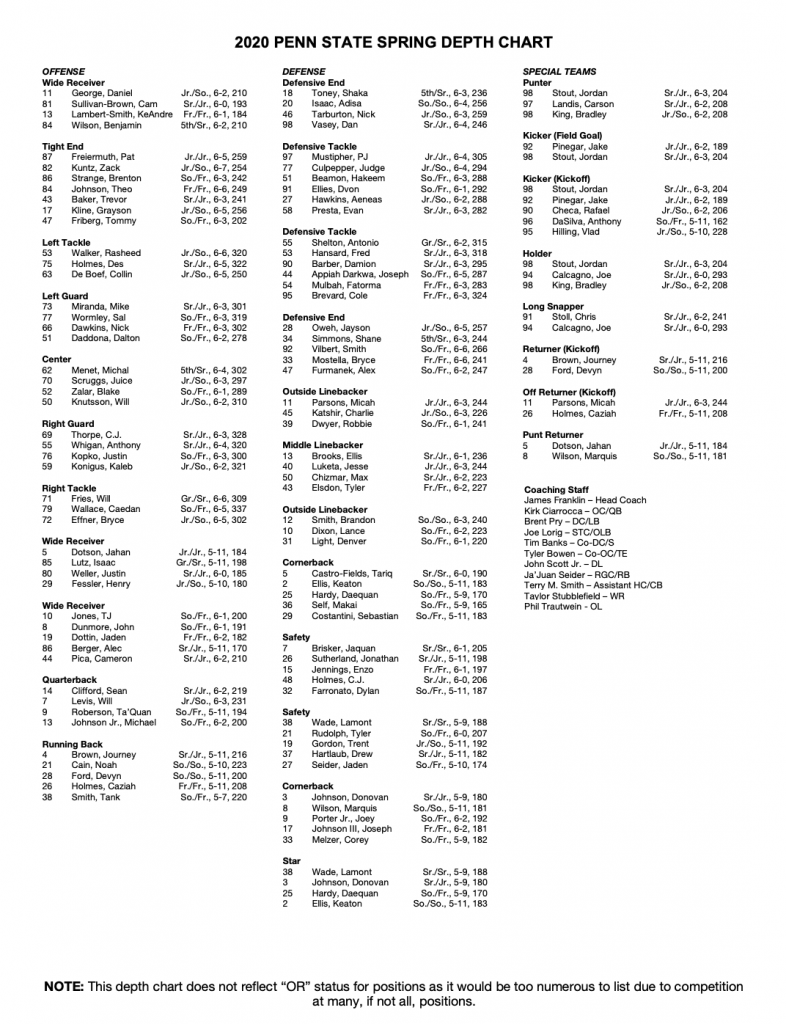 Major, earth-shattering news came out of Penn State this week, when the strategic communications office announced Monday that — and I don’t know how I’m even going to type these words without tearing up — the Nittany Lions football program will not be releasing a weekly depth chart leading into games this season.

James Franklin confirmed the shocking development during his press conference on Tuesday, taking time to address it before any question was asked, because he knew — just knew — some enterprising reporter was going to ask him about the decision to rid Happy Valley of one of the “local media’s” most cherished weekly talking points, damn the internet message boards.

“For us, we’ve always released a depth chart,” Franklin said. “I really don’t have a strong opinion either way. There have been multiple schools in the conference that haven’t been releasing it for a number of years. This year we found out that Illinois, Michigan, Michigan State, Minnesota, Nebraska, Ohio State and Purdue either were not releasing it, or thinking about not releasing it. It just didn’t make sense for us to do it if others weren’t.

“I know on Saturdays or Sundays, when we’re breaking down the next opponent, that’s already out there. It saves some work. It saves some time. I want to make sure we take care of the local media as much as we can. You’re at enough practices, you know what’s what anyway.”

Appreciative as the “local media” might be, can we take a moment to address the unquestioned integrity of the college football depth chart? It’s out there, for sure. And chock full of semi-valuable information.

Information like, “Who started at quarterback last week?” Or, “The starting Mike linebacker is going to be the five-star freshman we spent thousands of hours recruiting ‘OR’ the third-year walk-on who is close to winning a scholarship and deserves a shot because he has worked super hard with the scout team.” Like, “Who is the backup long snapper?”

However will we discover this information without you, depth chart? What can we trust, if we can’t trust the bulletproof information you used to provide, like “Hey, Micah Parsons is going to return kickoffs!”? What will those members of the media — local or otherwise — who have put Biblical stock into that weekly list of players overanalyze now that they don’t have this glorified roster in their clutches?

Speaking of rosters, why release those? There’s an idea! If a depth chart provides an opponent a competitive advantage, imagine what kind of gains a team can make if it simply doesn’t release a list of its own players!

RYAN DAY: “Beats me. We don’t even know who they have at running back. We don’t have a roster.”

And why stop there?

Let’s just keep the schedule in-house, too. What better way to surprise an opponent than by showing up on gameday…when they don’t even KNOW it’s gameday.

REPORTER: “Coach Harbaugh, why didn’t you show up for your big game with Penn State today?”

JIM HARBAUGH: “We had a big game with Penn State today? How were we to know, without a schedule?”

(Actually, not a good idea to plant this plan in Harbaugh’s head. I apologize.)

Let’s not lose focus on what’s of utmost importance, and I know that’s the depth chart, because so much time today — during the Penn State head coach’s press conference leading up to a huge Big Ten opener on the road against a nationally ranked team, absolutely a measuring-stick for a Penn State team aspiring to show 2020 was a fluke — was devoted to talking about why depth charts have gone the way of the fullback in this program. But like fullbacks, depth charts have been of questionable importance, and there are far better things to talk about than a list of players the coaching staff is under no obligation to follow come gameday anyway.

Rest in peace, anyway, to a college football institution, the game’s ultimate red herring: The depth chart. We won’t soon forget what you meant to us. (Unless a few minutes is considered “soon.”)