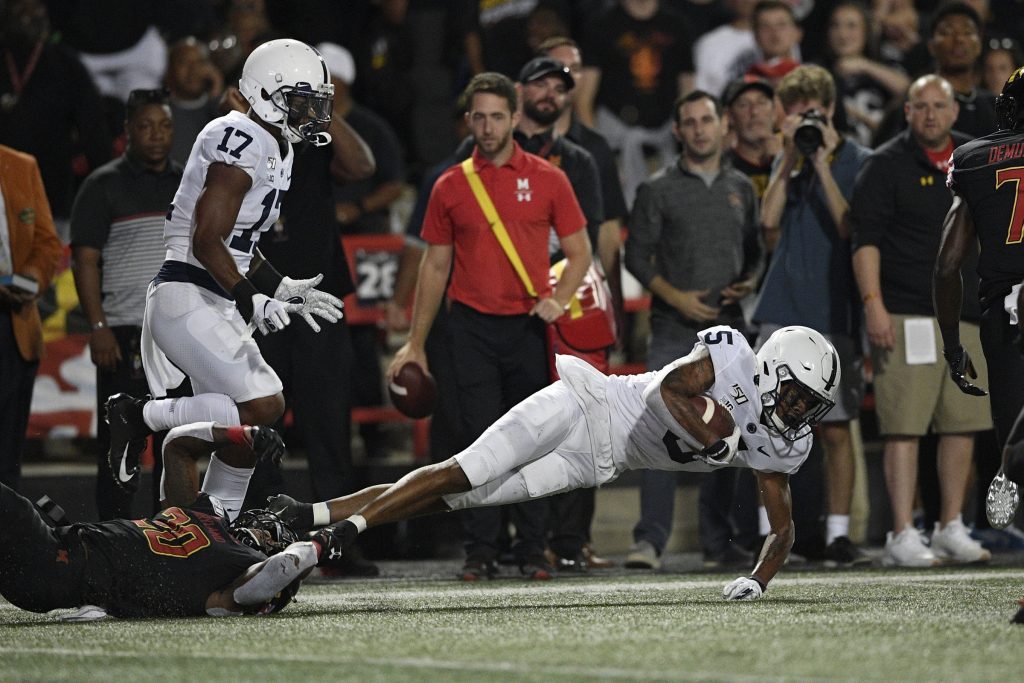 As Penn State kicks off spring football practice, there’s no better time than the usual time to take our first look of the year at Penn State’s full roster. Today, we take a deep dive into the cornerbacks.

Penn State is probably as deep and talented at corner as anybody in the Big Ten. 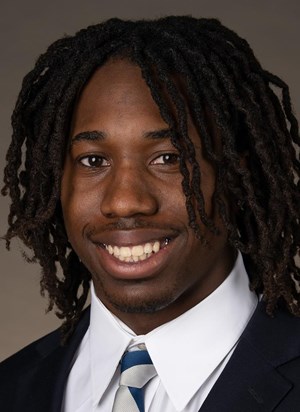 Joey Porter Jr. was a bit of a surprise starter at the beginning of 2020, and he had a marvelous season. He was third-team all-Big Ten, from the media, as a member of a 4-5 team without an interception. Which says quite a lot. He wound up with 33 tackles and four pass breakups, and he looks like one of the best young prospects Penn State has had on the corner in a long time.

Marquis Wilson emerged as the season went on as a reliable starter alongside Porter. He had 13 tackles and two pass breakups, but he really became more than just a role player during the Nittany Lions’ four-game win streak to end the season. Nine of his tackles and both breakups came during that span.

A real surprise last season was how much Daequan Hardy played, mainly out of necessity. But the undersized, unheralded Pittsburgh native really had some nice moments. He was arguably their best corner on the blitz, and while he got burned a few times — especially in the Maryland game — he got better as the season went on. He had 10 tackles, two pass breakups and a sack, and he really should have had another sack attributed to him.

Keaton Ellis is coming off a bit of a weird season. He didn’t play a whole lot in the middle of the campaign due to some injury issues, and half of his 12 tackles came in the loss to Iowa. But he did have an interception and became a bit better contributor over the final handful of games. Tariq Castro-Fields had plenty of injury issues, missing the final six games after a strong start. But he matched Ellis’ 12 stops in those games and appeared to be on the way to rebounding from that difficult 2019 season before another round of injuries befell him. 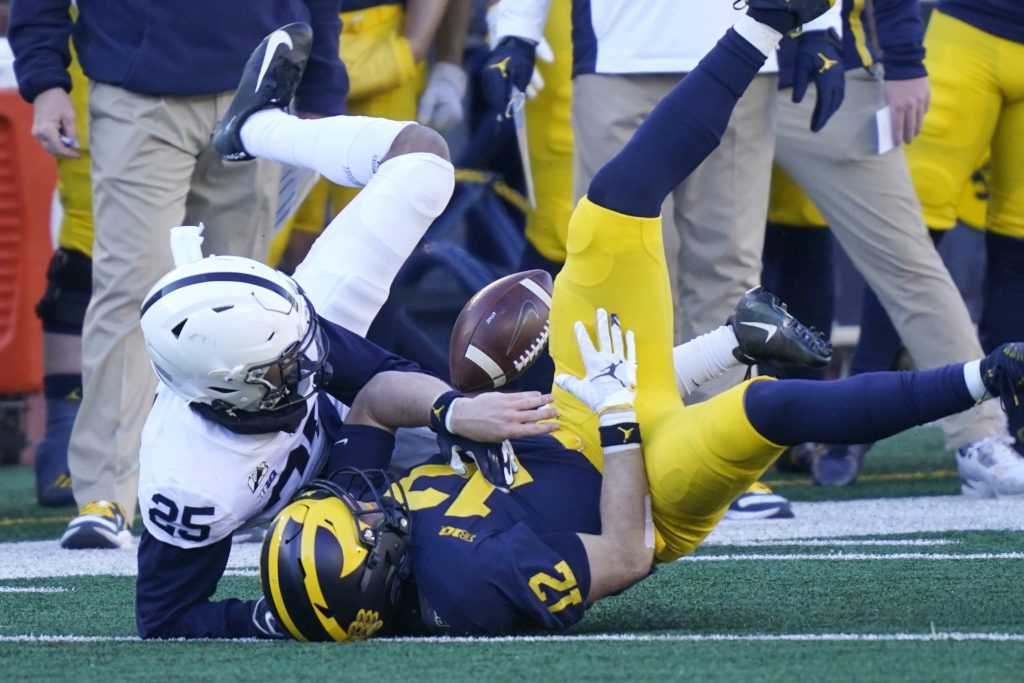 There weren’t any others, and the fact that Castro-Fields is back is a real boon to the defense. After all, a year ago at this time, that would have been an impossibility. He was one of two Penn State defensive players who could have left the program as seniors but instead took the NCAA up on its offer of a free season of eligibility.

…one of these corners isn’t a corner by the time fall camp starts.

A few years ago, Penn State had a lack of depth at safety and a surge in depth at cornerback, and the coaching staff remedied that by moving the one-time top-rated high school cornerback prospect in the nation to safety. It would not be a stretch to say that worked both for the Nittany Lions defense and Lamont Wade, who has a chance to play in the NFL as a safety and special teamer. 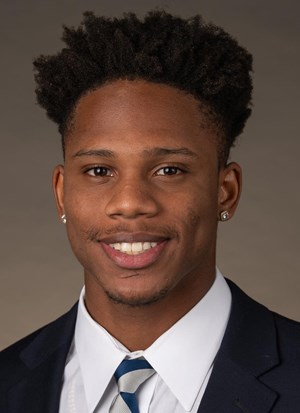 Why bring this up? Penn State has a perceived lack of depth at safety in 2021 and a surge in depth at cornerback. There have been rumors floating that the coaching staff could be looking to pluck a player from one position to bolster the safety depth, and while the message boards were once buzzing with the thought it could be a receiver, it would make most sense if that player is a current cornerback.

We can do some speculating on who that would be, but it would be strictly speculation. All I could say for certain is that it wouldn’t seem likely that, if it was a cornerback that moved to safety, that it would be Castro-Fields. But Penn State has a really good crop of athletes here, and it’s easy enough to see just about any of them not only moving back to the safety spot to help out there, but perhaps even excel.

Something to keep in mind: Penn State brought in two pretty well-rounded corners in the 2021 recruiting class, Jeffrey Davis Jr. and Kalen King, and there was some buzz around Joseph Johnson Jr. last year. Plus, Penn State added Johnny Dixon, a transfer from South Carolina who actually has three seasons of eligibility left and had a pretty good season for the Gamecocks (34 tackles and five pass breakups last season). 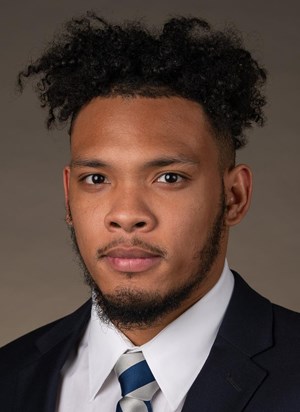 Usually we talk about a crazy scenario here, or perhaps a young player who hasn’t gotten a chance to crack the lineup that seems ready to make some noise.

But crazy as this sounds, when he’s right, I still think Castro-Fields is the best player in this group.

He has kind of been shrugged off the last two seasons, and injuries will do that to a player. For a while in 2019, he looked like one of the best corners in the Big Ten, then got hurt and lost all kinds of playing time to true freshmen like Ellis and Wilson. Last season, he again appeared to be on the way to his early-2019 form, then he got hurt and never made it back.

If he stays healthy, he’s an NFL prospect, for sure. He actually looks bigger than his listed 6-foot-0, 199 pounds, and he’s one of the fastest players in that cornerback group. He has decent ball skills, even if we haven’t seen them in a while. He’s the one guy in the room that we’ve seen do a little bit of everything, even if it has been spread out over three up-and-down seasons.

He can have a huge season if he stays healthy, and he needs to for his own sake. He gambled on himself coming back in 2021. If he doesn’t show it now, it’s going to be tough to sell the scouts.

Every year, some Penn State defensive coach rants about how they need more turnovers forced out of the secondary. Really, what they need is more coming from the cornerbacks.

During the James Franklin era, Penn State has only had one cornerback who has intercepted three or more passes in a season: Amani Oruwariye, who actually did it twice (4 in 2017, 3 in 2018).

What’s amazing is, they’ve had the same amount of defensive tackles intercept three or more passes in a season: Anthony Zettel had three in 2014.

Penn State’s career interceptions leader among cornerbacks on the 2021 team: Castro-Fields and Wilson. Both are tied, with 2 apiece.