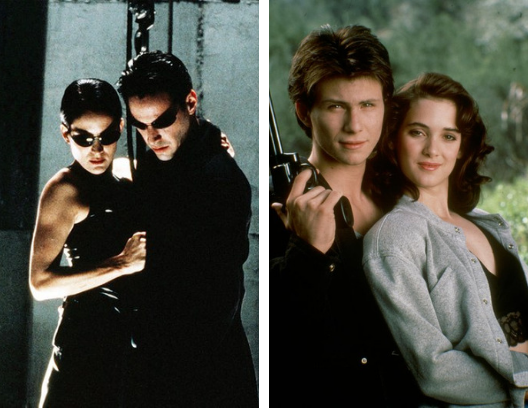 If you’re a member of Generation X (1961-81) or an early millennial (1977-83), the past three weeks have been filled with nostalgic looks at recent cinematic classics that shaped your adolescence and early adulthood. Two titles disrupted their genres with a fresh but dark look, and it’s highly likely that you own one of them in your movie collection. Let’s take a look back:

Debuting in 1989, the teen comedy starred Winona Ryder as smart teen Veronica stuck in a feared clique of rich snobs, led by Shannen Doherty, with its members taking the name Heather. Their last initial and love for shoulder pads distinguished them. Veronica was more like a pet than a peer to them, having not earned her “Heather” name yet. When she meets JD (Christian Slater), the school’s residential sociopath, the teenage lovebirds pick off their rivals and make them look like suicides.

The twisted, R-rated film followed years of tamer teen flicks like “The Breakfast Club,” “Sixteen Candles” and “Ferris Bueller’s Day Off” where the central character’s biggest obstacle was getting a date for the dance or getting out of school trouble. Having a film about teen suicides, homicides, F-bombs and sex was not the making of an instant hit. Its theme song, “Teenage Suicide” by Big Fun, was not exactly radio friendly. During its theatrical run that started on March 31, 1989, “Heathers” only made $1.1 million. Thanks to home video and cable TV, the dark comedy found its audience years later, creating a cult following. 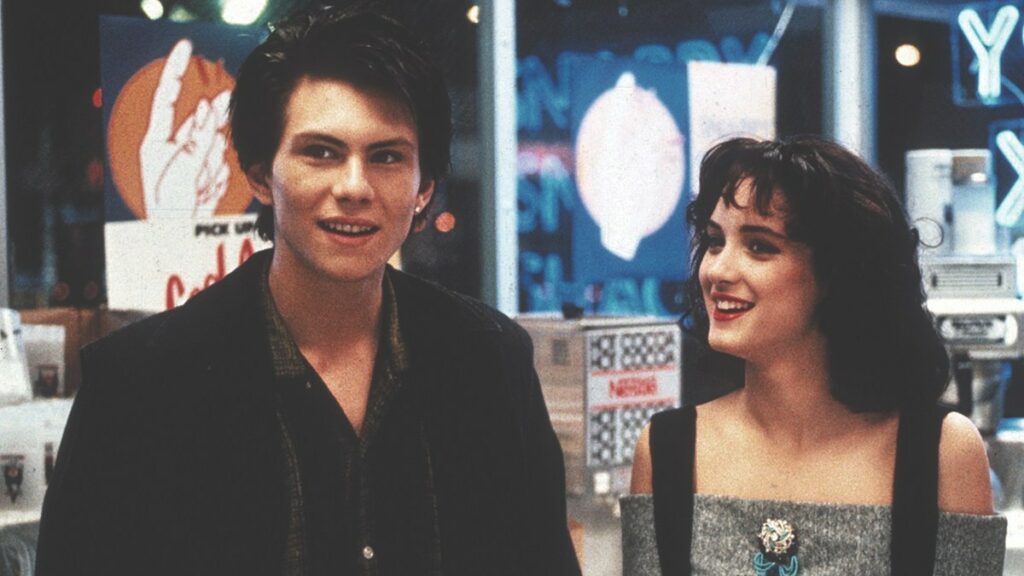 Its DNA is sprinkled throughout pop culture. In music, the California-based band The Donnas had its members named like the Heathers, replacing their first names with Donna and going by their last initial. Pop duo The Veronicas, composed of twin Australian sisters Lisa and Jessica Origliasso, got their band from a line in the movie when Veronica explains why she’s not a Heather. The fashions in “Clueless” from 1995 would not have existed if “Heathers” hadn’t arrived first.

While it remains popular to film fans, some of the film’s ideas have not aged well. With the dangers of bullying, suicide and school violence at the forefront, “Heathers” would receive the same scrutiny as it did 30 years ago, if not more. Omar Sanchez of The Wrap recently saw it for the first time with his roommates, and the 24-year-old summed up how his generation would feel about it.

After 30 years, the shocks of real life have reset the Richter scale of offensiveness. What seemed absurd in 1989 feels entirely plausible after Columbine, Parkland, and too many other school atrocities to list.

Sanchez suggested that “Heathers” comes with a content warning label for the violent acts, including sexual assault, that it depicts.

I was familiar with the film by the time I was in middle school in the early 1990s. It was the movie of sleepovers before it was replaced by “Clueless.” In fact, many of the teen-centric movies and television shows were taking a darker turn at the time, possibly spurred on by “Heathers.” But I didn’t watch the R-rated version until the early 2000s. I owned a DVD copy and would watch it as one of my feel-bad-but-it’s-good movies. I think that if I had discovered “Heathers” at the same time as Sanchez that I would think a warning would be needed as well.

Director Michael Lehmann did not make many movies after “Heathers,” most likely because of the widely panned “Hudson Hawk.” Instead, he has found success in directing TV shows, including “American Horror Story,” “Californication” and “Jessica Jones.” Ryder became of the top Generation X actresses in the 1990s with her roles in “Reality Bites,” “The Age of Innocence” and “Little Women.” By the early 2000s, however, her career was sidelined when she was convicted of a shoplifting case and sentenced to community service. She has made a resurgence this decade, starring in the Netflix series “Stranger Things” and in movies like “Black Swan” and “Destination Wedding.” Slater would also go on to star in “Pump Up the Volume” and “True Romance,” but would later be stuck in supporting roles and voice work. He has staged a comeback in television with a role in “Mr. Robot.”

Carrie-Anne Moss and Keanu Reeves in “The Matrix”

A movie about linear algebra, philosophy and computer hacking sounds entertaining, right? At the time that “The Matrix” was released March 31, 1999, I was a computer science major knee-deep in all the math requirements for the major. Seeing binary code as wallpaper didn’t appeal to me at the time.

About six months later, it was released on home video and fellow students were asking their professors about the film’s themes and how they relate to philosophy and religion. (Note: Never take math, computer science and philosophy classes in the same semester.) If you had to take classes where the work was performed on matrices and you then had to write out long proofs to go along with them, “The Matrix” would feel like your academic nightmare on screen.

At winter break, I returned home to find my father waxing poetically about the film. “Have you seen ‘The Matrix’?” he asked. “Ugh” was my first reaction, but since I had passed that torturous block of studies, I was ready to finally see it. Off to Blockbuster we went.

Starring Keanu Reeves, Carrie-Anne Moss and my dad’s favorite actor Laurence Fishburne, Thomas Anderson (Reeves) is a desk guy by day and a hacker by the name of Neo at night. When his illegal activities are discovered, Morpheus (Fishburne) leads him to safety but also unplugs Neo from the great illusion that is The Matrix. The system is a glamorized world from reality, where human bodies are used as batteries to it. Agents, including Agent Smith (Hugo Weaving), see Morpheus, Neo and Trinity (Moss) as threats to this digital mirage.

While many may have been swept away by the special effects like the crazy bending moves Neo does to dodge bullets (known as Bullet Time) or the kung fu lesson between Neo and Morpheus, I could see all those lessons the professors drilled into my brain. Much of Neo’s path to becoming the One is self-realization, freedom of the mind, and pursuit of the truth. These tasks were imbued with principles from classic philosopher and mathematician René Descartes (my favorite philosopher) and Christian and Buddhist themes.

Not only were the effects stylish, so were the threads in this movie. Outfitted by costume designer Kym Barrett, dark trench coats, PVC bodices and tiny sunglasses were all the rage for the characters. Inside The Matrix, the good guys wear black, with clothes that stored a massive arsenal. Outside it, the crew of the Nebuchadnezzar wore gray rags.

Cinematography and production design were well calculated to give a seemingly sci-fi voyage a film noir look. It’s not exactly black and white, but rather black, gray and green.

What’s remarkable about “The Matrix” at its time was the casting. This was a very diverse collection of actors in roles that had not been widely available to women or people of color. Moss is introduced as tough-kicking Trinity right out the gate, and Reeves, who had mostly starred in slacker or light-hearted films (except for “Speed”), has a demanding action role. Fishburne had a wide-ranging career before he was cast as Morpheus, but he didn’t have a part quite like this one.

The directing team The Wachowskis had only made one film, the low-budget modern noir, “Bound,” before releasing “The Matrix” for Warner Bros. in 1999. With an explosive $27 million opening weekend, the siblings could tell their story as the trilogy they attended it to be. They followed the first with “The Matrix Reloaded” and “The Matrix Revolutions” in 2003. As more opportunities opened for the pair, they became open with who they are. After the release of “Speed Racer” Lana Wachowski revealed in 2012 she transitioned to a transgender woman, years after being known as Larry and being the subject of derogatory gossip. Lily, previously known as Andy, also came out as a transgender woman in 2016. Lily wrote a statement for the Windy City Times describing her and her sister’s experiences with the media and highlighting how destructive transphobia can be.

Being transgender is not easy. We live in a majority-enforced gender binary world. This means when you’re transgender you have to face the hard reality of living the rest of your life in a world that is openly hostile to you.

Several fans of “The Matrix” and film experts sensed that the film had transgender-related themes. And movie catalogues, historians and more have respected them by changing their past credits as the Wachowski Brothers to the Wachowskis or by their individual names.

Reeves has become an even bigger action star since 1999, including the “John Wick” trilogy. In between the big-budget fare, Reeves continues to make indie films, including the aforementioned “Destination Wedding.” In his directorial debut, Reeves teamed up with “Matrix” stuntman and kung-fu choreographer Tiger Hu Chen in the 2013 film “Man of Tai Chi.” Fishburne has appeared in starring and supporting roles in film and television, including “Black-ish” and a few “Superman” movies. The Wachowskis have yet to match the financial success of “The Matrix,” but their Netflix series “Sense8” made waves in LGBTQ representation on screen.