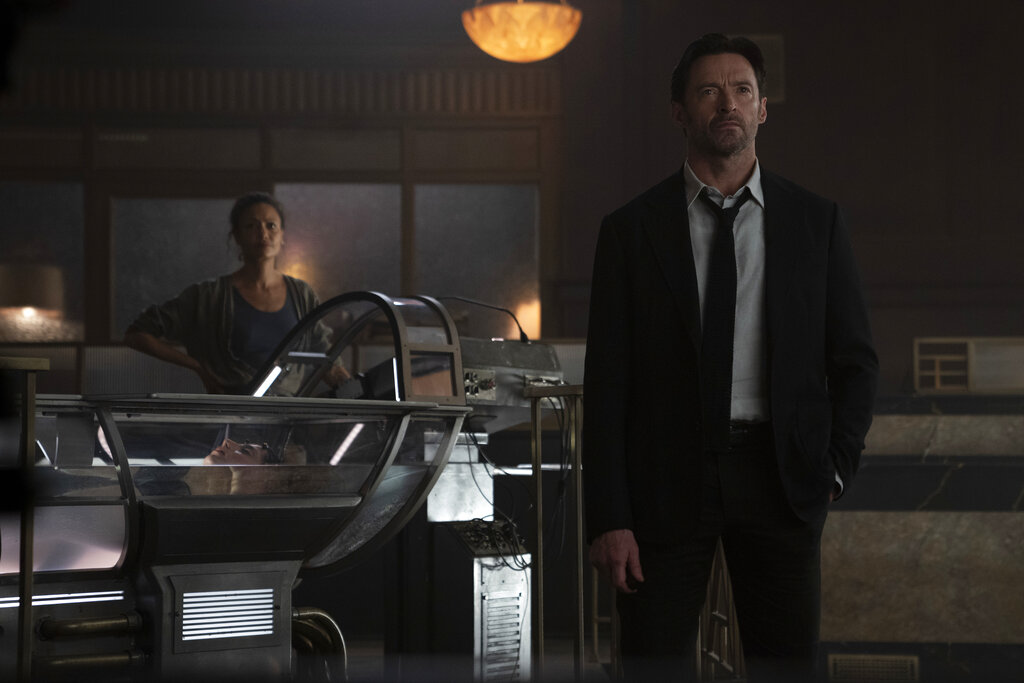 It’s a bad sign when a film called “Reminiscence” reminds you of other – and better – movies.

The sci-fi noir hybrid, available in theaters and on HBO Max, features an intriguing concept about the power of memory in a dystopian future that sees the oceans rising and overtaking the Gulf Coast. But the promising film drowns in its lofty ambitions, playing like a watered-down “Inception.”

The story follows Nick Bannister (Hugh Jackman), a war veteran who operates a Reminiscence machine in Miami with his business partner, Emily “Watts” Sanders (Thandiwe Newton). The machine allows people to relive their favorite memories. As the rising waters portend the end of the world, the popular technology allows people to seek comfort in the past to escape the dire present.

Nick’s world changes when sultry lounge singer Mae (Rebecca Ferguson) walks in, asking for help in finding her missing keys. Nick is immediately enamored with the songstress, and the two embark on a romance. But when Mae mysteriously disappears, Nick becomes obsessed with tracking her down. The veteran uses his own technology to search his memories and those of others to find his lost love, uncovering a web of lies and deceit that makes him question the woman he thought he knew.

Embracing its apocalyptic setting, “Reminiscence” starts off strong. Making her feature film debut, writer-director Lisa Joy builds a visually striking world that recalls the atmosphere of her successful HBO series, “Westworld,” which she co-created with her husband, Jonathan Nolan (Christopher Nolan’s brother). The impressive production design sees water fill the streets of Miami, mimicking Venice as the city’s denizens turn to gondolas to get around. People live nocturnally as the oppressive heat makes it difficult to move about during the day. But as interesting as the concept of a water-logged world is, the film does little with it.

Instead, “Reminiscence” abandons its more original aspects to travel down avenues paved by other films. The movie takes the “Inception” route, which was helmed by Joy’s brother-in-law. While “Inception” focused on dreams as a means to an end, “Reminiscence” relies on memories. Nick coaxes the machine’s customers using a key phrase, much like Leonardo DiCaprio’s Cobb does in “Inception.” Both men are haunted by a beautiful but tortured femme fatale. And both are challenged by a teammate or partner who acts as a voice of reason.

“Reminiscence” also includes echoes of “Laura,” the classic film noir that sees a dogged detective fall in love with the victim of the murder he’s investigating. There’s also breadcrumbs of “Blade Runner,” as Nick’s path of obsession recalls that of Harrison Ford’s iconic gumshoe Rick Deckard.

But the predictable “Reminiscence” lacks the complexity of all these films, especially the multi-layered storytelling of “Inception.” Though convoluted, Joy’s interweaving mystery is not as sophisticated as the movie seems to think it is. Its puzzle is rather straightforward, and I figured out a lot of it before the pieces were laid out (except for a third-act twist that I enjoyed). The film struggles to connect its various dots, which causes the film to feel boring for most of its two-hour runtime. Perhaps the filmmakers were aware of this, because “Reminiscence” throws in two random action sequences to liven up the proceedings. One highlights Newton’s action prowess, which she has honed to perfection as my favorite character on “Westworld.” But the other only adds some cool imagery, which isn’t enough to justify its inclusion.

One aspect where “Reminiscence” doesn’t falter is its cast. The film reunites Jackman and Ferguson from “The Greatest Showman,” and their chemistry sizzles onscreen. However, the movie only gives us a few scenes with Nick and Mae before she disappears. This isn’t enough time for viewers to become invested in their relationship before Nick makes it his mission to find her.

The real reason the audience roots for Nick is because of Jackman. The soulful actor brings more to the grizzled veteran than what’s on the page, tapping into Nick’s despair and longing as he faces one obstacle after another. The excellent Ferguson channels the femme fatales of the ’40s, switching from icy to vulnerable as the enigmatic singer harbors a slew of secrets. Unlike “The Greatest Showman,” she gets to sing for real, and her voice is enchanting. Newton completes the terrific trio as the no-nonsense veteran with a heart of gold. The fantastic actress grounds the story as Nick’s down-to-earth, ever-loyal partner who’s running from her own issues.

Ultimately, “Reminiscence” is more forgettable than memorable. Joy’s feature film debut unearths interesting ideas and solid visuals. But its soggy story recalls too many other influential films to be able to stand upright on its own. The mediocre movie may hold appeal for “Westworld” and Jackman fans. Otherwise, skip the trip to the theater and catch it on HBO Max.

I’ve said it before. We’ve seen it before. We’ll see it again. A movie’s search for an identity sometimes dooms the outcome. It’s a problem that happens often, especially with movies of today. The frustration is there’s always a good movie within these films that never quite sees the light of day. We get flashes, but it doesn’t come together. Add “Reminiscence” to that list of films. The question is could a strong cast and a strong finish make the film worth the watch?

The selling points to “Reminiscence” were Hugh Jackman (Nick Bannister) and Rebecca Ferguson (Mae), two versatile actors who have the ability to carry any film. They didn’t disappoint. Jackman played this role in the past. His character is very similar to his part in Christopher Nolan’s “The Prestige.” Obsessed in his search for knowledge, nothing will stop either character from getting what they want in their respective movies. So Jackman obviously played the role in “Reminiscence” very well. He has the perfect look and physicality to handle the part. He shows his emotions through body language. He also tacks on his frustrated and angry voice that never goes too over the top.

Ferguson takes on a mysterious role with ease. The nuanced performance works perfectly for the film. She has to seem innocent, charming and deceitful simultaneously. The same shots reveal a different side to her, much like some scenes in the brilliant “The Usual Suspects.” She also has a beautiful voice.

The great performance that boosted this film came from Thandiwe Newton (Emily “Watts” Sanders). She gave this film a “Big 3” instead of just a dynamic duo. The film needed a strong presence to go toe-to-toe with Jackman and Newton is more than up to the task. She has a believable strength, both physically and emotionally, while portraying a vulnerable side.

The film’s finish also proves a strength as all the pieces come together nicely. That writing brings the film to another level, but the web the movie weaves is intricate. It takes an incredible amount of time to create the pieces to the puzzle, which makes the majority of the film dull.

It also pulls a lot from better films. As my dad mentioned when I watched it with him, “Reminiscence” sets up a lot like “The Prestige.” Besides a similar character played by the same actor in Jackman, the construction of the films mirror each other to a certain extent. “The Prestige” has a lot to establish and takes the audience to a lot of places. However, where it’s better than this film is that thrilling and engaging scenes happen along the way. There aren’t too many to be had in “Reminiscence” before we get to the reveal. Then they throw everything at the audience at once. That’s why it feels it needs to throw in two random action sequences. One lingers on and on to the point where it becomes tiring, not that it was ever thrilling. The other is absurd with laughable slow motion and “Tainted Love” randomly playing on the jukebox in the background. It was a huge tonal shift that for some reason tried to play for comedy. Also, how filmmakers built toward the reveal in “The Prestige” is how “Reminiscence” constructs its film into the third act.

“Reminiscence” also has shades of “Inception” and definitely “Blade Runner.” The scene in Miami looks similar to the setting of the classic sci-fi flick. “Reminiscence” also utilizes the narrative noir style. I will give the film credit for the world building. I enjoyed the contrast between the Miami nightlife in a city that’s mostly underwater and the beauty of the sunny clear skies above ground. It was one of the film’s strong pieces, but they couldn’t quite put it together to form a cohesive whole.

“Reminiscence” boasts a strong cast and an admirable third act, but it tries to pull too many things from better films in an attempt to make this one great. It also struggles to keep the right tone, and takes too long to get to the point. By the time the reveal arrives, you may not care anymore. Is it worth a rent or a free viewing on HBO Max? Yes. Is it as memorable as the great films it tries to mimic? Not even close.