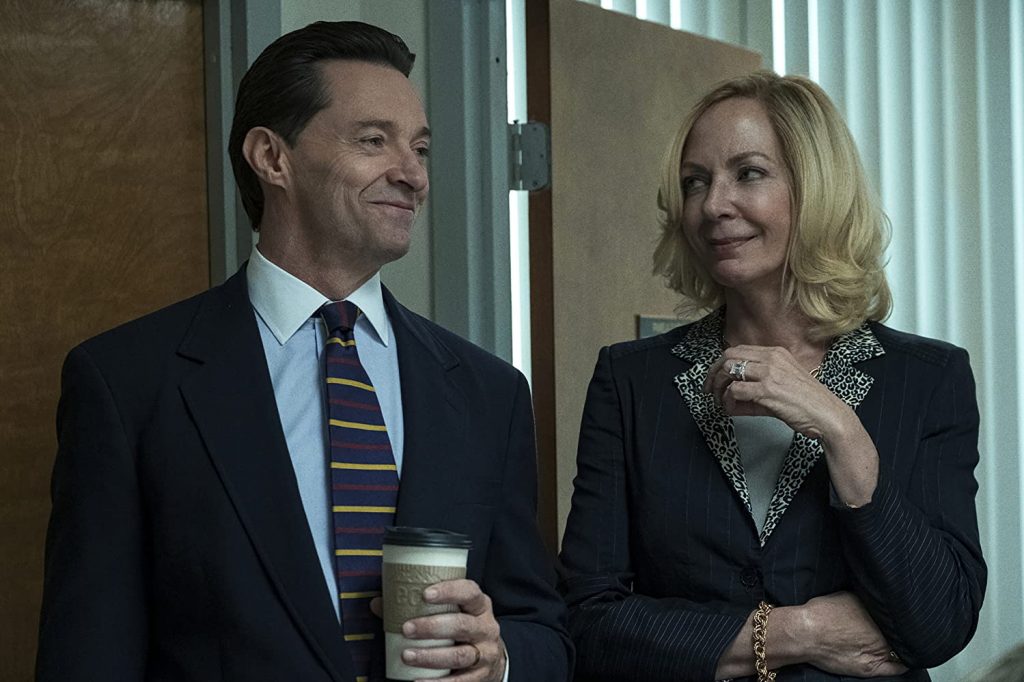 Before I started watching “Bad Education,” I didn’t know anything about the real-life story that the new HBO film is based on. The compelling and juicy drama about the biggest public school embezzlement scheme in the nation’s history hooked me immediately.

Featuring a smart script, talented cast and brilliant performance from Hugh Jackman, “Bad Education” aces the recounting of the school scandal. The film expertly navigates its twists and turns, unspooling a brazen tale of corruption that would seem unbelievable were it not true.

Set during the early 2000s, “Bad Education” centers on the Roslyn School District in an affluent section of Long Island, New York. The district’s leader, Superintendent Frank Tassone (Jackman), is much loved by parents, teachers and school board members. His leadership has vaulted the high school into one of the country’s top-performing schools, which has boosted the area’s property values and allowed students to receive scholarships for Ivy League colleges.

But the district is slowly starting to come under scrutiny for its spending. Tassone’s assistant superintendent and right-hand woman, Pam Gluckin (Allison Janney), is accused of stealing money from the high school. To save Roslyn’s reputation, Tassone convinces the school board not to alert the police. But the pilfered funds are just the tip of the iceberg.

When school newspaper reporter Rachel Barghava (Geraldine Viswanathan) begins digging into the high school’s Skywalk beautification project, she finds unusual expenses that don’t add up. As she pursues the story, Tassone emerges in the cross hairs. With the authorities taking notice, the superintendent’s web of theft and deceit catches up with him.

“Bad Education” presents the picture-perfect façade of Roslyn High School, then deconstructs it to show the corruption festering inside. The film’s introduction eases viewers into the story and introduces the players involved. Director Cory Finley frames early scenes in the school like promotional photos, with the camera lingering on the school’s beautiful campus and Tassone’s pleasant interactions with students and staff. Later, the camera pans up to show a leak in the school’s roof, a sign of rot and indication that something’s not right.

The well-plotted story doles out its information in a suspenseful narrative structure, dishing out revelation after revelation. As the dominoes fall one by one, the tension continues to build, culminating in an emotional climax. This keeps the film moving at a good clip and viewers glued to their screens.

Known for playing Wolverine in the X-Men films and “The Greatest Showman,” the affable Jackman is one of the most versatile actors working today. In “Bad Education,” the charismatic actor uses his charm to con parents, school board members and romantic partners alike in his best performance yet. The film seeks to understand why an intelligent man like Tassone – full of potential like his students – would cheat his school of millions of dollars.

As Tassone, Jackman gradually peels away the layers of the insidious superintendent like an onion, revealing a shocking double life. First, Tassone starts out likable, knowing students by name and joining a parent’s book club. Jackman taps into Tassone’s passion for nurturing students. But his penchant for expensive suits, plastic surgery and trips to Las Vegas give away his lavish lifestyle. Jackman excels in delivering the film’s memorable monologues, including one when he calmly explains how the larceny started innocently. In another, he breathlessly explains the word “accelerate” to a student, losing his cool.

If Jackman is the film’s all-star, then Janney is a close second. The Oscar-winning actress for “I, Tonya” delivers an outstanding supporting turn as the bold and brash Gluckin. Like Tassone, Gluckin flaunts her wealth, hosting parties at her luxurious home and driving an expensive vehicle. The entitled school official is so confident in committing fraud that she assures her niece (Annaleigh Ashford) that charging a PlayStation to the district’s credit card is no big deal. Despite Gluckin’s criminal activities, Janney manages to draw sympathy in a riveting scene where Tassone and the school board confront and patronize her.

The drama also features strong performances from the rest of its supporting cast. Ray Romano, coming off acclaim for “The Irishman,” adds another solid turn here as school board President Bob Spicer, who believes in Tassone’s ability to elevate Roslyn to greatness. As school reporter Rachel, Viswanathan shines as the tenacious student faces the dilemma of exposing fraud while jeopardizing her school’s prestigious standing. Alex Wolff (“Hereditary”) is also good as the conflicted editor of the school newspaper, who must decide whether to run Rachel’s piece.

With its fascinating tale of corruption, great performances and excellent leading man in Jackman, “Bad Education” makes the grade. The HBO film mines the rich subject matter of its true-life story into a gripping film that will satisfy viewers’ need for quality drama during the theater blackout. 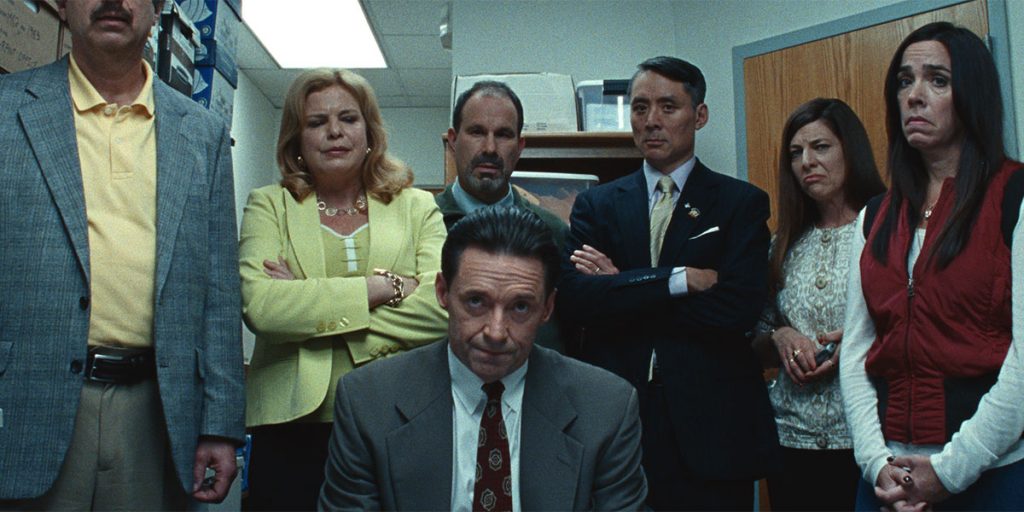 Ever been disappointed by a good movie? That’s how I felt after watching HBO’s “Bad Education.”

A lot of times a trailer misrepresents what a movie will bring to the table. That happened here and that’s fine. A film overcomes that with its quality. However, when I’m in the midst of a movie and it presents interesting characters and dynamics that are pushed to the side, it’s difficult to fully support that film. Here’s how “Bad Education” let me down.

“Bad Education” is based on a true story I never heard of, so that intrigued me. What I thought I knew about the film was there would be a great dynamic between Hugh Jackman and Oscar winner Allison Janney. That’s what the trailer sold me. The film builds their chemistry quickly, and separates them just as fast. Instead of having two leads with a great back-and-forth, Jackman is forced to carry two-thirds of the film. He’s a great actor so he does that well, but keeping Janney more in the fold would have made the film that much better.

The trailer also sold humor and an upbeat tone. Sure, the film would obviously have drama as administrators are accused of stealing millions in taxpayer money. However, “The Big Short” deals with a serious subject matter and beautifully balances humor and a quick pace with drama. “Bad Education” sold that vibe as the trailer was riddled with jokes and snappy music. However, other than what the trailer presented, “Bad Education” is a straight-up drama with a normal pace. Its overbearing classical score adds to the lack of levity and bolsters the drama.

Barely in the trailer, if at all, Geraldine Viswanathan portrays student journalist Rachel Bhargava and proves one of the most intriguing characters of the film. Her character investigates the administration’s fraud. Viswanathan is excellent and I found myself very engaged during her scenes. She investigates and works through her story while the relationship with her father grows. Her portion of the film also explores the conflict in going after an administration that helps students get into their preferred colleges. That was the most interesting part of the movie. However, her scenes are too few as the focus of the film is Jackman.

All that being said, “Bad Education” is unquestionably a good movie. The acting is great led by Jackman in a role that audiences don’t usually see him tackle. Janney once again proves phenomenal. Viswanathan surprises in a role that could have been bigger. Ray Romano continues a career resurgence. I respect the film for taking a different look at fraud and getting into the mind of the criminals. It was an interesting avenue to explore as people who commit crimes are not always completely bad people. The classical score is the only part that didn’t work for me. It didn’t fit the film and needed less volume.

“Bad Education” is a good movie that most audiences will enjoy. It checks a lot of the boxes for what makes a quality film. It is the best-made movie I’ve seen since the quarantine started. Maybe if I watched it again, I would like it more, but I was looking for something different than the movie gave me. That’s not the film’s fault, but that doesn’t change the fact that I only liked it. I didn’t love it.