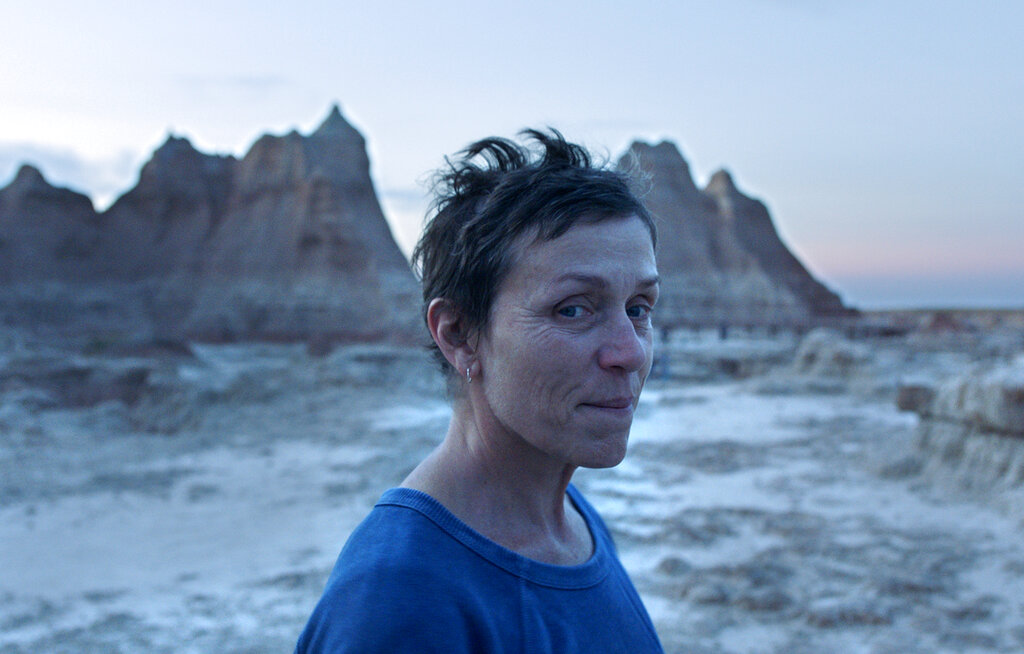 With the open highway as its backdrop, the gorgeous “Nomadland” is more than a transfixing journey across the American West – it’s an introspective odyssey of the soul. The thought-provoking road drama, now streaming on Hulu, speaks to a country looking to find itself amid the coronavirus pandemic.

Director/co-writer Chloé Zhao’s haunting masterpiece about modern nomads thrives on its organic direction, authentic approach and Oscar-worthy lead performance by Frances McDormand. An intimate look at an unconventional way of life, “Nomadland” is one of the best films of the extended 2020 movie season.

The drama, based on the book by Jessica Bruder, is set in the wake of the Great Recession. In 2011, Fern (McDormand), a widow in her 60s, loses her job after the plant where she worked shuts down. As the town’s residents empty out, Fern decides to travel the country looking for seasonal work, living out of her van. As she tells a friend’s daughter, “I’m not homeless. I’m just house-less.”

Setting out for the open road, Fern meets a scattered community of nomads. Most of them are older people who can’t afford to live on Social Security. Eschewing their former middle-class lifestyles, they take to their vans and RVs, moving from one job to another. As Fern learns to become self-sufficient, she makes new friends, tries new jobs and carves a new life for herself.

In her third feature film, Zhao adds a personal touch to “Nomadland.” She makes audiences feel like we’re riding shotgun with Fern as we experience the cross-country journey right alongside her. Zhao mixes long takes of the natural scenery with closeups of the characters’ faces. She wields a confident command over the production as she allows the story to unfold at an unhurried pace, giving enough time to the quiet moments. The camera often lingers on McDormand as she lets the emotions of each experience wash over her face.

The film offers a balanced take on the joys and hardships of nomadic life. “Nomadland” revels in discovering the beauty of the West, from the sweeping deserts of Arizona to the awe-inspiring buttes at Badlands National Park in South Dakota. The stunning cinematography highlights the beauty of the natural landscape. The tourist locations appeal to an audience deprived of traveling during the pandemic. But the film isn’t afraid to show the less glamorous aspects of the transient lifestyle. There’s the calamity of repairing a blown tire, the mundanity of maintaining the paint of your vehicle – and the necessity of defecating in a bucket. 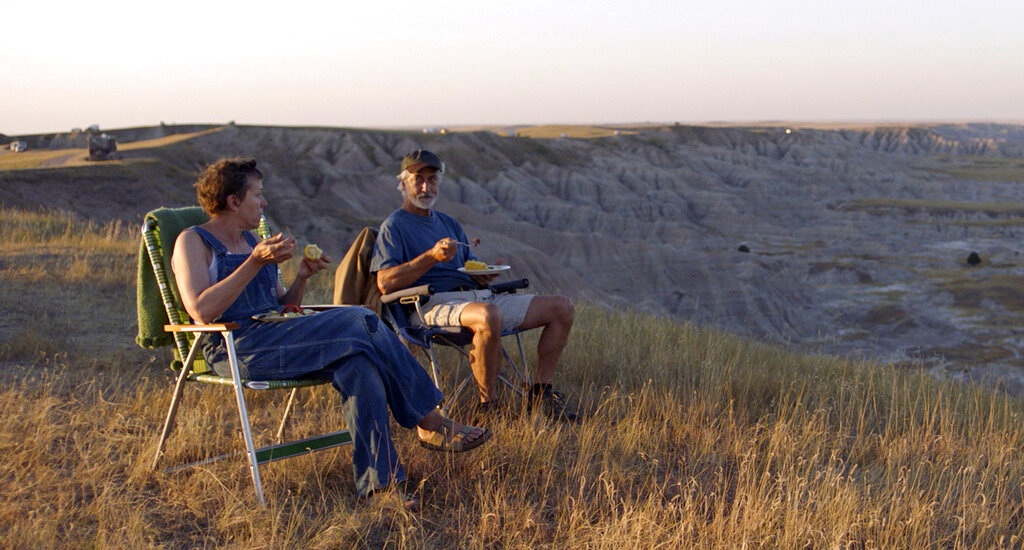 With its raw take on its subject, “Nomadland” feels like a documentary. The film blends real people with fictional characters. The likable nomads whom Fern meets along the way are real-life transients. Their economic hardships following the Great Recession find an ear in viewers reeling from the financial fallout of the pandemic. There’s the fun-loving Linda May, whose smile can light up the desert. The down-to-earth Swankie teaches Fern some pivotal skills to survive life on the road. The kind Bob Wells organizes a support system for the nomads. All three give natural performances that lend an authenticity to the film.

As the compassionate Fern, McDormand gives one of the year’s best performances. The two-time Academy Award winner is one of the best actresses working today, and “Nomadland” further cements her status. With her cropped hair and lack of makeup, McDormand portrays Fern as no-nonsense, grounded and fiercely independent. But the actress also reveals Fern’s warmth and vulnerability as she embraces the nomadic life.

“Nomadland” is structured so Fern spends about 10 to 15 minutes in each new place, with each new person. Each experience impacts Fern as she adds another stop on her personal journey. She often reconnects with people down the road, and McDormand taps perfectly into the happiness of each reunion. Whether it’s having a “spa day” with Linda May at a nomad camp or reminiscing about her husband with Bob, McDormand makes Fern feel just as real as they are. The heartfelt portrayal may earn McDormand her third Academy Award.

McDormand also shares a nice chemistry with David Strathairn, who plays Dave, a nomad with a crush on Fern. Strathairn is easygoing and unassuming as Dave goes on his own journey, which includes reconnecting with his son (played by Strathairn’s real-life son, Tay).

As beautiful as it is profound, “Nomadland” offers an eye-opening look at life on the open road. The contemplative drama is timely as viewers dream of travel while dealing with the economic impact of the pandemic. Zhao’s natural direction and McDormand’s masterful performance should propel the film to best director, best actress and best picture nominations at this year’s Oscars. As the characters in the film say, “See you down the road,” we’re sure to see “Nomadland” down the road at the Academy Awards ceremony.