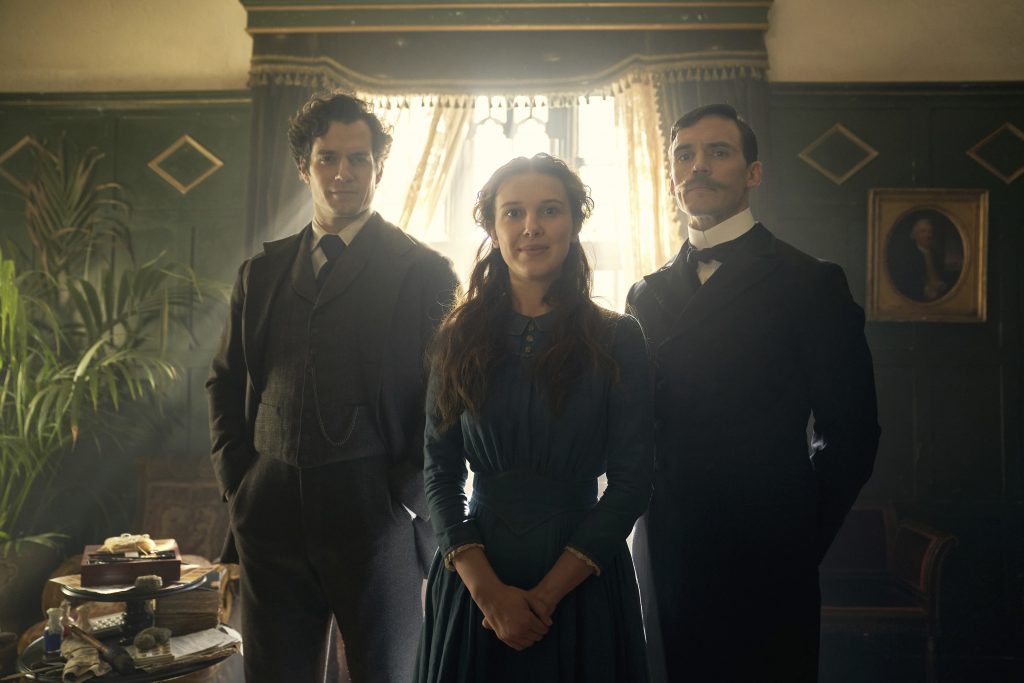 When I first learned about the Netflix film “Enola Holmes,” I was excited about a female-centric offshoot of the Sherlock Holmes mythology. I enjoy all the movies and TV shows related to the brilliant detective, including the modern-day BBC series starring Benedict Cumberbatch, the Guy Ritchie-directed movies starring Robert Downey Jr. and the CBS drama series “Elementary” fronted by Jonny Lee Miller.

Led by superstar-in-the-making Millie Bobby Brown, the delightful “Enola Holmes” uncovers a new take on the famed family of sleuths. With its disarming heroine, feminist viewpoint and likable cast, the charming family-friendly adventure is fun to watch. Brown ushers in a new generation of teen detective that lives up to the Holmes name in a star vehicle and a potential franchise starter.

In 19th century England, wild child Enola Holmes (Brown), the sister of in-demand detective Sherlock (Henry Cavill) and government official Mycroft (Sam Claflin), is turning 16 years old. Unlike her well-known brothers, the clever and fiery Enola has been raised by their free-thinking mother, Eudoria (Helena Bonham Carter), to fend for herself. Like Sherlock, Enola has a talent for deduction.

When Eudoria disappears, Enola must put on her sleuthing cap to find her mother while keeping her disapproving brothers at bay. Along the way, Enola crosses paths with a runaway royal, Viscount Tewkesbury (Louis Partridge). Chased by a determined assailant (Burn Gorman), the young man’s life is in mortal danger. Enola decides to help the inexperienced lord-to-be while also trying to track down Eudoria, drawing her into a two-fold mystery that will test her detective skills.

Much like its titular heroine, “Enola Holmes” is bright and breezy, a welcome spin on the darker Sherlock stories. The film is based on a series of young adult novels by Nancy Springer, which I haven’t read. But I know Sherlock. “Enola Holmes” applies the traits associated with the master sleuth to his teenage sister in believable ways. Like her big brother, the intelligent Enola is well-read, trained in the martial arts, has an affinity for word games and demonstrates a penchant for disguise. The fast-past, well-edited film does a good job in showing how Enola and Sherlock arrive at their deductions, allowing viewers to get in on the mystery-solving.

The terrific Brown carries the film on her sturdy young shoulders. I’m probably the only person who hasn’t seen “Stranger Things,” which made Brown a household name. But after “Enola Holmes,” I’m now a big fan of the actress. The film requires a lot from Brown, who succeeds at every turn. As the strong-willed Enola, Brown is funny and witty, serious and vulnerable. She can be street-smart one minute, then naïve the next as the sleuth-in-training. Brown often breaks the fourth wall, letting us in on her thoughts with just a smile or a sarcastic look. The effective technique makes viewers feel they are always in step with the character, rooting her on along the way. Brown also learned the art of jiu-jitsu and performs her own stunts – in a corset, no less! The actress shows herself game for anything, and her star will only rise from here.

The female-empowered “Enola Holmes” showcases a forward-thinking heroine who will appeal to young teens. Enola wasn’t taught to embroider; she was taught to defend herself with her words and actions. The film’s modern message works within the restrictions that women faced during the Victorian era, showing a desire for change that would eventually lead to the women’s suffrage movement. Bonham Carter’s visionary Eudoria stands at the forefront of the charge, looking ahead to what could be her daughter’s future. “Enola Holmes” beautifully delves into their mother-daughter relationship. Ideally, mothers teach their daughters what they need to know to make their own way in life. Through flashbacks, Enola recounts her mother’s life lessons, shaping her into a young woman ready to take on the world. Bonham Carter knocks it out of the park as the supportive Eudoria, whose presence looms large.

Brown shares a great chemistry with the rest of the cast. Cavill shines as the master detective himself, Sherlock Holmes. The DC Extended Universe’s Superman is down to earth here, playing a more human iteration of the popular Holmes. Cavill’s sleuth genuinely cares about his sister, wanting to take the up-and-coming gumshoe under his wing. As Enola, Brown is the only one who can challenge Sherlock and get away with it. Cavill’s warm and sympathetic performance separates itself from the aloof, arrogant and eccentric versions inhabited by Cumberbatch, Downey and Miller. I’d be willing to watch a Sherlock-centered standalone starring Cavill.

Satisfying the teen romance component, Partridge distinguishes himself as the sensitive Tewkesbury as he shares a cute camaraderie with Brown. Both Tewkesbury and Enola are educated, but their knowledge lies in different areas. Where the viscount knows about plants, government process and social decorum, Enola knows about ciphers, going undercover in boy clothes and fighting off would-be assassins. Each saves the other, demonstrating the equality in their relationship. I really enjoyed Partridge and Brown’s playful back-and-forth banter, which reminded me of the screwball romantic comedies from the 1930s and ’40s.

As engaging as “Enola Holmes” is, the film is not without its flaws. At two hours and four minutes, the film runs long, and starts to feel it before the mystery kicks up in the final act. Its last action sequence takes a frightening and violent turn. The jarring move feels disconnected from the rest of the light-hearted flick.

The movie also takes leeway with its depiction of Mycroft Holmes. In other versions of Sherlock, his brother has the same wits and deduction abilities as the master sleuth. But in “Enola Holmes,” Claflin’s version appears clueless, with his siblings and others able to run circles around him. The character may have been dumbed down to bolster Enola’s abilities. Claflin makes the most of the role, but this Mycroft is a flat antagonist.

Is this the last we’ve seen of “Enola Holmes”? I certainly hope not. With Brown’s tremendous performance and an enjoyable supporting cast, the fun mystery-adventure paves the way for future franchise outings. The game is afoot as Brown’s strong, feminist heroine updates the Sherlock Holmes mythology for a new generation of fans.