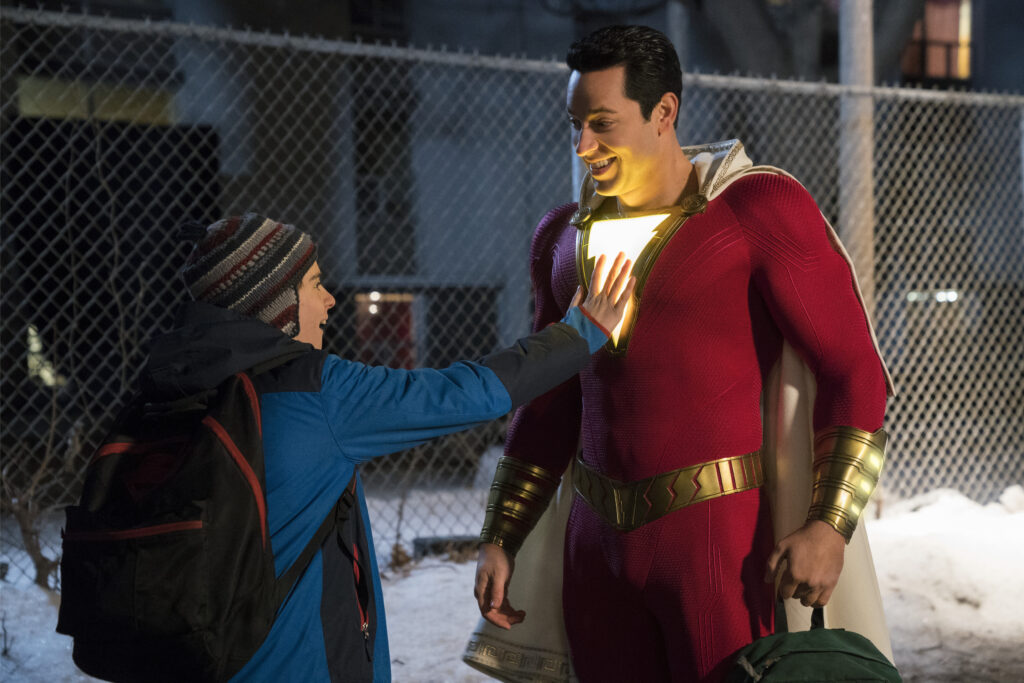 Since the DC Extended Universe got off the ground in 2013, the comic book franchise has struggled to find its way on the big screen. Initially embracing a dark feel with polarizing entries like “Man of Steel” and “Batman v Superman: Dawn of Justice,” the franchise has gradually turned lighter, refreshed by the acclaimed “Wonder Woman” and last year’s hit “Aquaman.”

Now the DCEU’s latest installment, “Shazam!” – the seventh film in the franchise – aims to be a light-hearted and fun entry. A dynamic Zachary Levi plays the titular role to perfection, leading a delightful cast.

But while the film may be different from the other movies before it in the franchise, that doesn’t make it better. “Shazam!” suffers from wild mood swings as it tries to balance elements of comedy and horror. The superhero origin film conjures up a mixed effort as the DCEU moves away from a unified cinematic universe.

“Shazam!” follows sullen and streetwise 14-year-old Billy Batson (Asher Angel), who’s been in and out of foster homes after he was separated from his mother as a youngster. After his latest effort to find her goes awry, Billy winds up in a group home where he meets Freddy (Jack Dylan Grazer), a disabled teen who is fascinated by superheroes.

After he stands up to some bullies tormenting Freddie, Billy is summoned by Shazam (Djimon Hounsou), an aging wizard who passes on his magical powers to the teen to protect the world from the Seven Deadly Sins. By saying Shazam’s name out loud, Billy discovers he can transform into a grown-up superhero (Levi). It’s a gift he can use to help others, but that he also learns how to exploit.

However, evil scientist Dr. Thaddeus Sivana (Mark Strong), in league with the Seven Deadly Sins, believes Shazam’s powers would be better suited for him. With the help of Freddy and his new foster family, Billy must discover what being a superhero really means before the sins are unleashed upon the world.

Largely a standalone film, the entertaining “Shazam!” ties into the DCEU with clever references to Superman and Batman. While DCEU films tend to overload on CGI in the climactic battle between hero and villain, “Shazam!” smartly reins it in and takes a surprising route. The film has memorable action sequences, including a suspenseful bus crash and an exciting carnival finale.

Levi and Asher introduce Billy/Shazam to the DCEU, playing two sides of the same coin. Levi is a breath of fresh air, lighting up the screen. As the adult version of Billy, Levi taps into the childlike aspects of the character, capturing the wonder of being a superhero. Some of the film’s funniest scenes are when Shazam and Freddy are testing the superhero’s abilities, from bullet resistance to super strength to flying. Levi and Grazer, who was also excellent in 2017’s horror hit “It,” have a fantastic camaraderie that makes their unusual friendship believable.

While Levi carries the superhero duties, the young Asher tackles the more adult issue of Billy’s search for family. He has some of the most emotional scenes in “Shazam!” as he comes to terms with his abandonment. Through Asher, Billy builds connections with his foster family, including the precocious Darla (Faith Herman) and the studious Mary (Grace Fulton).

What hurts “Shazam!” are its sudden shifts in tone. The film, rated PG-13, has been marketed to young kids. But “Shazam!” goes from being laugh-out-loud funny to spine-tingling scary, without warning. The tonal whiplash is jarring.

Director David F. Sandberg, who helmed “Lights Out” and “Annabelle: Creation,” reveals his horror background in the film’s frightening moments, which may be too intense for young viewers. The dark elements are an unneeded callback to the tone of earlier DCEU movies.

The film’s villain is also weak. Strong gets a lot of screen time as Sivana. But the character is one-note as the scientist has been holding onto the same grudge for decades. It’s a curious decision to grant so much time to the character when there’s no effort at developing him.

“Shazam!” diverges from the established DCEU by trying for a more fun tone, even if the path it carves is a rocky one. Hopefully the planned sequel will smooth out the edges.

The DC Comics movie machine has churned out another character from its library with the introduction of “Shazam!” Starring Zachary Levi as the title character and Asher Angel as the teenage alter ego Billy Batson, the latest PG-13 DCEU offering blends tragedy with a doses of humor and product placement to protect magic from supervillain Dr. Sivana (Mark Strong) and the Seven Deadly Sins (monstrous CGI ghouls).

Unlike Batman or Superman, “Shazam!” takes place in an actual city, Philadelphia, with its motto fitting that for a foster group home that takes in Billy after he has run away from some many foster homes in the past. Philadelphia is not gloomy like Gotham City or towering like Metropolis, but the city of brotherly love has the right elements for training a superhero. At the home, Billy finds comic-book obsessed Freddy Freeman (Jack Dylan Grazer), a disabled teen who becomes his best friend. After taking on Freddy’s bullies at school, Billy is snatched from the real world and into a magical lair where a wizard (Djimon Hounsou) gives him superpowers to fight off the Sins. It’s in this same lair that Dr. Sivana acquired dark magic and the will to defeat his nemesis.

The darkness in the origins story is classic DC and should not be repeated in future “Shazam!” reboots. It is countered with the lightness that is the teenager stuck in a superhero’s body. Billy, as himself and as the hero, rarely makes the right decision throughout the film. Freddy lives through Billy’s powers, serving as his “hero manager” and hype man. Their times together are comical, especially as they try to figure out what superpowers Billy has and what name he should have.

Compared to the six other DCEU movies, “Shazam!” is a middle-of-the-road offering. The effects are OK, the action is lukewarm and the symbolism is not strong. The climactic fight scene is not memorable, but the laughs are. With this comic being less known than heroes like Aquaman, the Dark Knight and Man of Steel, there are tons of DC toys, T-shirts and collectibles littered throughout the film to hammer in your head that this is not Marvel. It’s more distracting than it is helpful. Then again, Hounsou appears in this and in “Captain Marvel,” so if you are confused about which comic giant made this, you are justified.

Despite its shortcomings, “Shazam!” is a fun time at the movies. Remembering that these are kids being forced into impossible situations makes it a good exercise to suspend logic and practicality. Levi looks like he’s having fun being a fish out of water (sorry, Aquaman), and it works on many levels. Angel and Grazer are equally entertaining, and the rest of the foster kids create a believable, unconventional family. It also helps with the family theme that this all takes place during Christmas, so it will have a long life as a holiday movie.

“Shazam!” is a close attempt to making a good superhero movie. Let’s hope that the unavoidable sequel will not be a banal reproduction.