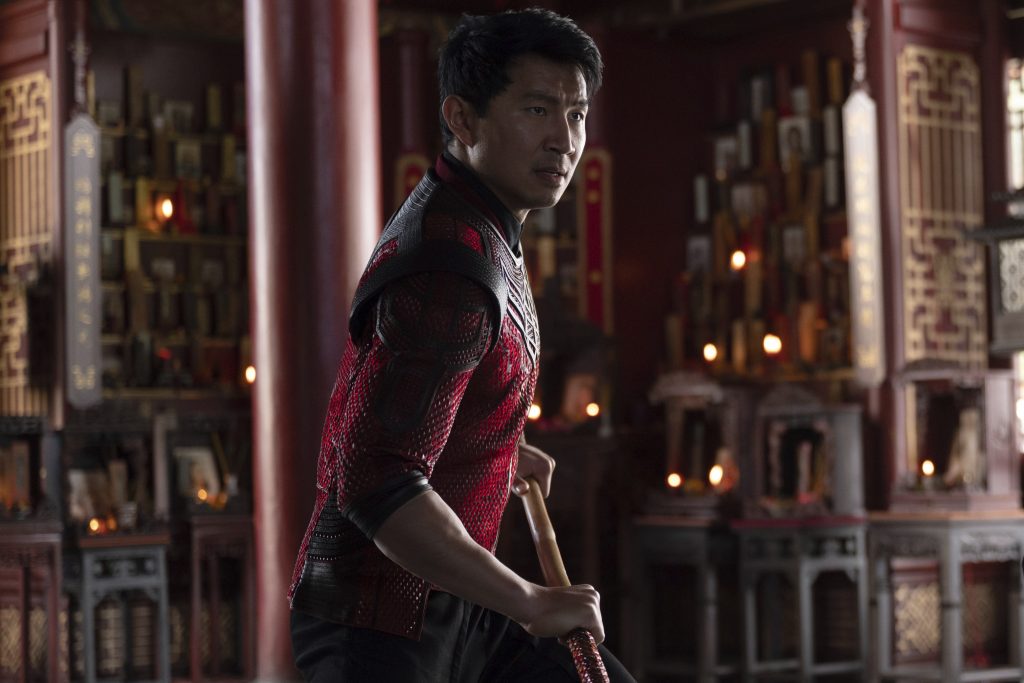 Review: “Shang-Chi and the Legend of the Ten Rings”

Thirteen years after Tony Stark first said, “I am Iron Man,” the Marvel Cinematic Universe has expanded its reach to introduce dozens of superheroes and discover new worlds. The comic-book film franchise gleefully barreled into space in “Guardians of the Galaxy” (2014) and embraced the mystical realm in “Doctor Strange” (2016). The box-office juggernaut broke barriers by celebrating Black culture in the masterpiece “Black Panther” (2018) and charted a new course by launching the multiverse in “Spider-Man: Far From Home” (2019).

As the MCU embarks on Phase 4, be prepared to be blown away. The jaw-dropping “Shang-Chi and the Legend of the Ten Rings” shows the MCU still has plenty of stories to tell and trails to blaze. The 25th film in the ever-growing franchise is unlike anything Marvel has done before. The MCU’s first Asian-led superhero film perfectly blends martial arts, awe-inspiring fantasy and family drama in one of Marvel’s best origin stories yet.

Franchise newcomer Simu Liu shines as Kung Fu master Shang-Chi, a reluctant hero living the quiet life in San Francisco. For the last 10 years, the unambitious Shang-Chi – who goes by the name Shaun – has been working as a valet alongside his best friend Katy (Awkwafina). But his past catches up with him when he is attacked by goons sent by his father Wenwu (Tony Leung), the holder of the legendary Ten Rings and leader of the crime syndicate of the same name.

Drawn back into the life he hoped to escape from, Shang-Chi reunites with his father and estranged sister Xialing (Meng’er Zhang). But the family reunion is cut short when Wenwu asks his children to join him on a mission that jeopardizes the fate of the world. With innocent lives at stake, Shang-Chi must confront his destiny and decide who he ultimately is.

With its predominantly Asian cast, “Shang-Chi and the Legend of the Ten Rings” explores Asian culture and marks an important milestone for Asian-American representation onscreen. Under the reins of Asian director and co-writer Destin Daniel Cretton, “Shang-Chi” explores family ties and heritage, weaving in Asian traditions, mythology and lore. Starring Marvel’s first lead Asian superhero, the mainstream comic book film does for Asian audiences what “Black Panther” did for Black viewers. Finally, part of the audience who has helped the MCU’s films earn billions of dollars around the world can see a hero who looks like them. As the titular character, Liu is likable and relatable as the conflicted Shang-Chi struggles to find his identity. The character isn’t fully formed by the time the film ends, which should allow for more development in future films.

If you’ve been waiting for a full-length martial arts movie from Marvel, this is it. “Shang-Chi and the Legend of the Ten Rings” showcases the best fighting in the franchise, which until now belonged to 2014’s “Captain America: The Winter Soldier.” The intricately choreographed sequences feature mesmerizing kung fu and hand-to-hand combat, with Liu, Zhang and martial arts veterans Leung and Michelle Yeoh performing their own stunts. Liu’s impressive mastery of the martial arts makes Shang-Chi a believable kung fu master, lending authenticity to his performance. A knock-out, drag-down fight between Shang-Chi and Wenwu’s henchmen on a bus establishes Liu’s credentials early on, setting the pace for the rest of the film.

The fantasy spectacle juggles a lot of plates impressively. “Shang-Chi and the Legend of the Ten Rings” allows its escalating family drama and stirring fights to play out against gorgeous backdrops and special effects, which really stand out in 3D. The story not only serves as a journey of self-discovery, but as a tale of grief. Shang-Chi, Xialing and their father are still mourning the loss of the siblings’ mother, Li (Fala Chen), years earlier. Instead of bringing the family together, their grief has driven them apart. In one beautiful sequence, Leung and Chen go toe-to-toe in a fight that alternates between martial arts and a romantic dance. The film also introduces the mystical land of Ta Lo, full of magical creatures inspired by Asian folklore, including an exquisitely rendered dragon. The layers of storytelling add emotional stakes to the intense finale, which pits son against father – and legendary creature against creature.

Liu leads an excellent cast. Like Chadwick Boseman’s T’Challa in “Black Panther,” Liu’s Shang-Chi is surrounded by formidable females. As Katy, Awkwafina provides the perfect conduit for audiences into this fantastical world. The actress mixes well-timed humor with a flair for action as she seeks to understand what’s happening. Forced to fend for herself, Xialing emerges from her father’s shadow to make her own way in the world. In her film debut, Zhang taps into Xialing’s anger at her brother and father, as well as her fearless determination to succeed on her own. In flashbacks, Chen provides a soothing and encouraging presence as the brave Li. Yeoh lends gravitas and support as a Ta Lo resident with a connection to Shang-Chi’s family.

The MCU crafts one of its best villains yet in Wenwu. The wielder of the Ten Rings is more than just an enemy – he’s a grief-stricken husband and father whose motivations for his actions make sense. Leung is both fearsome and sympathetic in the role. The film even addresses one of the most polarizing moves in the Marvel Cinematic Universe by having Ben Kingsley return as Trevor Slattery from 2013’s “Iron Man 3.” The revelation the character wasn’t the Mandarin from the comics upset a lot of fans, even though I personally loved it. Still, bringing back Trevor allows Marvel to address the controversy in a way that should appease fans and acknowledges the weightier issue of cultural appropriation. Trevor isn’t the only familiar face who returns, so Marvel fans should keep their eyes open.

As enjoyable as it is impactful, “Shang-Chi and the Legend of the Ten Rings” pushes the MCU into brave new territory. The fantasy epic marks a new high for Asian representation in comic book films, catapulting Liu’s kung fu master into the mainstream. With its impeccable fights, compelling family dynamics and vivid landscapes, the film introduces yet another corner of Marvel Comics for audiences to explore. Like the Avengers before him, Shang-Chi is now part of a larger universe – and I can’t wait to see what happens next.

This image released by Marvel Studios shows Awkwafina and Simu Liu in a scene from “Shang-Chi and the Legend of the Ten Rings.” (Marvel Studios via AP)

After two years without a film that moved the Marvel Cinematic Universe forward, “Shang-Chi and the Legend of the Ten Rings” gave fans a taste of what is to come in the franchise’s fourth phase. “Black Widow” kicked off Phase 4, but was more of an origin story/prequel. Disney Plus released three shows (“WandaVision,” “Falcon and the Winter Soldier” and “Loki”) that move the MCU plot forward, but “Shang-Chi” is the first film that finally takes the audience past 2019’s “Spider-Man: Far From Home.” If films like this are the future of the MCU, fans will be excited.

The action stands out the most, as actors actually trained in martial arts helmed every fight sequence. It brought back shades of Jackie Chan, Jet Li and Bruce Lee. It also reminded me of scenes from “The Raid” franchise, the gold standard of hand-to-hand combat in film. As a result, “Shang-Chi” gives audiences the best action sequences in the MCU. When actors can actually handle the physicality and choreography of fight sequences, it makes the director’s job that much easier. Destin Daniel Cretton was able to give the film longer takes and fewer cuts, helping the audience see what’s actually happening in action sequences.

The difference between a “Raid” movie and a big-budget Marvel movie is Cretton had to blend raw hand-to-hand combat with CGI and he helmed it beautifully. There’s one great sequence where one fighter uses strength and power, while the other fighter brings grace and nature into the battle like an airbender (Don’t be afraid, it’s nothing like “The Last Airbender”). It’s a gorgeous sequence that perfectly blends raw talent with beautiful CGI. The movie also creates thrilling sequences in a bus and on a skyscraper’s scaffolding. The music that played during these sequences also fit perfectly. A piece beautifully complements the emotion of a few sequences.

The acting is excellent as most of the actors have to capture the physicality of their roles, along with emotion and comedic timing. Veterans Michelle Yeoh (Shang-Chi’s aunt Ying Nan) and Tony Leung (Shang-Chi’s father Xu Wenwu) give strong supporting performances. In a small role, Fala Chen (Shang-Chi’s mother Li) brings heart to the film. Simu Liu (Shang-Chi) is solid in the lead role and Meng’er Zhang (Shang-Chi’s sister Xialing) brings strength and emotion to a character that will be interesting to see grow in the franchise. The most important performance came from Awkwafina (Shang-Chi’s best friend Katy). The film needed the personality that she brings to everything she’s involved with. In turn, she helps bring a personality out of Liu. Without her, the film wouldn’t have as much life. While she’s only a supporting character, her energy fueled the movie and the actors around her. “Shang-Chi” also brings back a random character from “Iron Man 3” who proves a strong addition to the movie.

The script is strong as it proves smart, funny and emotional. The themes are excellent as Shang-Chi struggles to find himself. It really hit me as he learns from his parents and tries to embrace the best parts of them to make himself a better person, something every child can relate to. I also always appreciate a villain who has understandable motives, and this film delivers on that, too. While the script succeeds in creating powerful moments and developing some characters, it oddly underdevelops Shang-Chi. While we see some of his training growing up and get some of his backstory, Shang-Chi spends the movie finding himself. As a result, we don’t really know who he is. There was also a random character with a mask that the movie never reveals the importance behind, although it made the character seem important.

The final battle focuses more on CGI than the martial arts sequences showcased earlier in the film. It’s a little disappointing as it’s not as engaging as the earlier hand-to-hand combat, but the powerful and emotional finish still works. Some characters also learn fighting techniques and archery in a day. The movie is a little over two hours, but I would have liked to have seen more development, which would have given us more time with the great Yeoh and added more to Shang-Chi’s character.

“Shang-Chi” is a unique film that brings diversity into the MCU. I’ve waited for the franchise to tackle a martial arts film and it didn’t disappoint. It perfectly blends a raw fighting style with gorgeous CGI. It also brings a different culture into the fold. While it doesn’t have the impact of a “Black Panther,” “Shang-Chi” follows admirably in its footsteps.