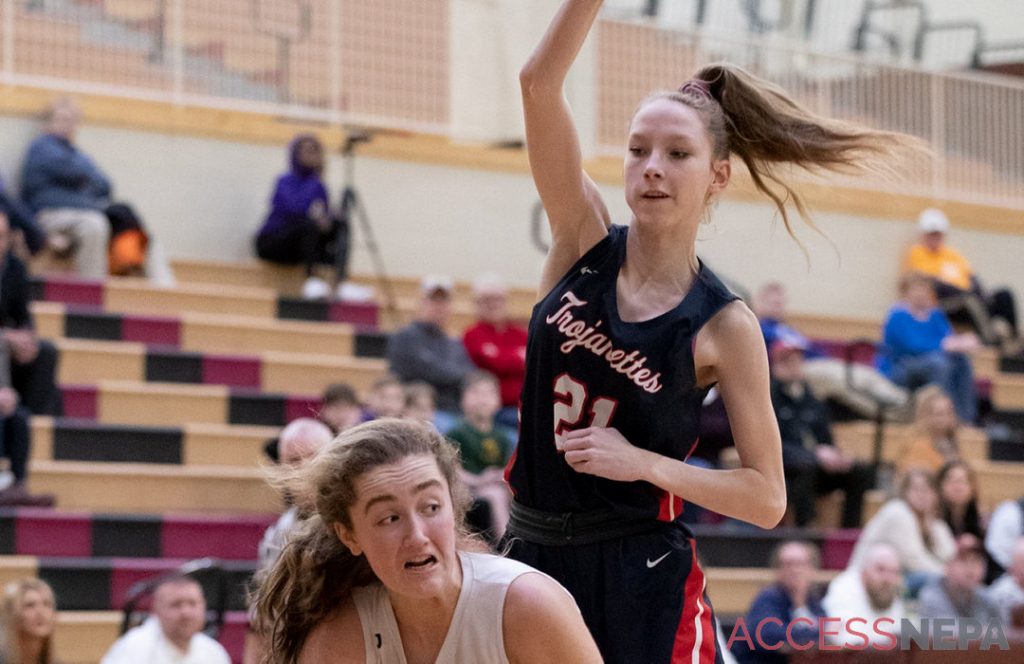 To look on the bright side of things is often easier said than done.

Nanticoke Area junior guard Riley Baird found the bright side, however, for the few weeks in which the Trojanettes held mostly masked and socially distanced practices.

In-person practices have since ceased. Monday marked three weeks since the Wyoming Valley Conference effectively shut down its winter sports programs, a move that preceded a statewide shutdown that could be lifted Jan. 4.

Teams have had to get creative in the meantime and, luckily for Nanticoke Area, Ed Grant Jr. has implemented virtual communication within his team since he was appointed head coach three years ago.

“We use a Google Classroom to share some ideas and things to the kids,” Grant said. “Basically, we put down some ideas for workouts that they could follow on YouTube. A lot of the stuff that we use, they don’t necessarily need equipment … some dumbbells if they have them available. Mostly, we’re stressing the cardio aspect of things to be in shape; and going outside for walks and runs.”

Basketball teams need to score points, though, and that’s led to players like Baird and senior Lauren Casey using their backyard and driveway hoops more than ever.

“I would go outside to my driveway and shoot like at least 100 shots and then a few foul shots, too, to keep everything together,” Casey said. “When our season starts up again, I won’t be too rusty.”

Nanticoke Area hasn’t played a varsity game since Feb. 25, a season-ending, 40-36 loss against Berwick in the District 2 Class 4A third-place game.

Baird, the team’s leading scorer and 3-point shooter and one of only two sophomores who made The Citizens’ Voice all-star team (the other being Lake-Lehman’s Claire Dougherty), missed that game with the flu, she said.

Having a healthy Baird and Casey, as well as returning starters Brooklyn Biehl and Abby Cullen, has the Trojanettes setting high expectations for the new season.

Baird got her first taste of coronavirus-era athletics in the fall, when she played field hockey.

“I was so grateful that I got to play field hockey,” Baird said. “As soon as that was over, I’m like, ‘OK, it’s basketball season. We gotta get ready.’”

The PIAA’s official start date for practice was Nov. 20 and Nanticoke Area got in more than a dozen practices, Grant said, before being shut down.

“Coach Grant tried to tell us to keep our masks up as much as we could,” Casey said. “If we needed a mask break, we separated ourselves and then quickly put it right back on and got right back into the drill. … We wanted to try to keep each other safe because everyone went home to different people in their family, people who were more at-risk than others.”

Grant estimated that players had their masks on during 90% of practice, a signal that everyone had taken the looming threat of coronavirus seriously, even though players say wearing a mask presented some difficulty when breathing heavily.

“We were all in it together because we didn’t want it to get shut down. We were doing so good, too,” Baird said. “We were all following everything, kept our masks on the whole time, nobody ever took it off — only when we got a drink, we’d pull it down and put it back up.”

COVID-19 has affected even the most cautious individuals and groups, however, leading to a nationwide spike in cases that’s led to some speculation that the shutdown could continue past Jan. 4.

When the season gets underway, Nanticoke Area will compete in the competitive WVC Division 2 with Hanover Area, Holy Redeemer, Lake-Lehman, Tunkhannock, Wyoming Area and Wyoming Seminary. The playoffs will be even tougher with the additions of Redeemer and Dunmore to an already packed District 2 Class 4A field.

Still, Nanticoke Area’s goal remains the same: to add its digits, “2021,” to the banners inside the gymnasium that honor past league, district and state champions.

“That’s our goal right now and we feel like we can do that,” Grant said. “Just, hopefully, we could get back at it.”