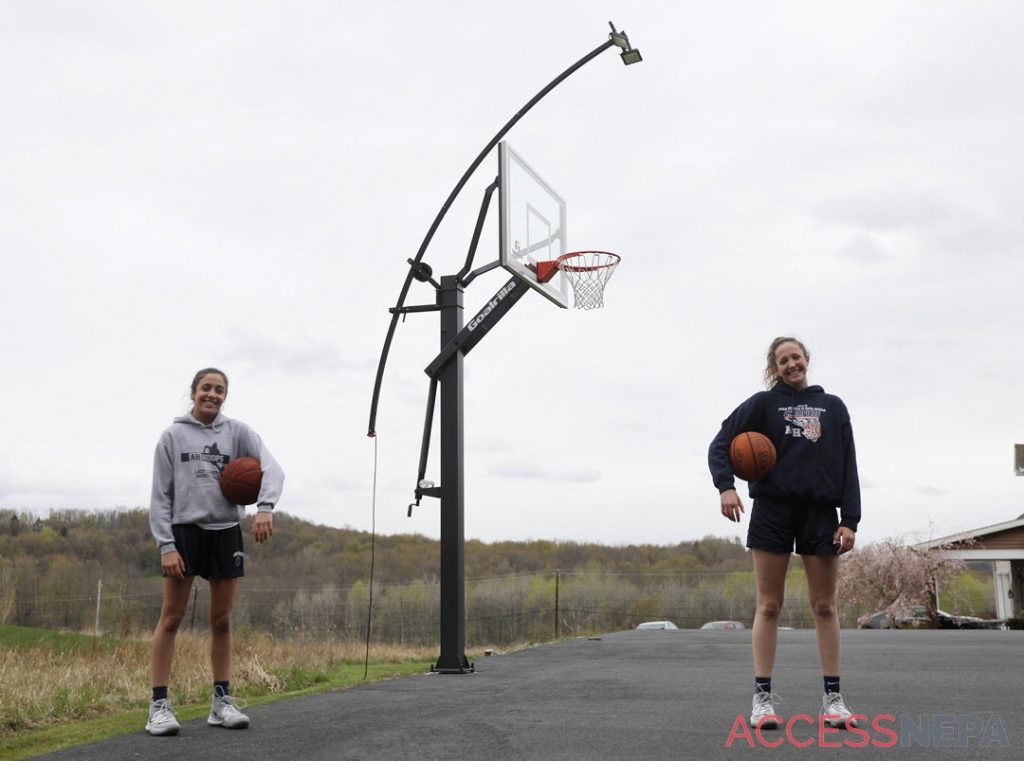 Lady Comets stay together while apart

It’s not just being part of a basketball team.

It’s helping the local Meals on Wheels. Continuing to write in their gratitude journals. Seeing their teammates through a virtual team yoga session every Friday.

And the physical workouts that might make some of them wish for more chores from their parents, and less time for the weekly 200-or-so minutes of running, bicycling or working on basketball skills.

Whatever Abington Heights girls basketball coach Deanna Klingman has designed over the past few weeks, it’s helped not only to sharpen their on-court skills, but bring a small sense of normalcy to the trying times during this coronavirus pandemic.

“We’re trying to keep them motivated and connected through all this because that’s the most important thing,”

All of it is with one goal in mind: Remember that you’re not alone.

“I feel like we are family to each other,” sophomore forward Anna Scoblick said. “I think it’s definitely helping a lot. We’ll get on the (Zoom) meeting and while we’re waiting for coach Klingman to get on the meeting we’re all laughing and joking with each other. We’re still having fun.”

Like other teams who meet every week via the internet, the Lady Comets found how good it is for more than just morale.

“It’s kind of pushed us to become more comfortable with each other,” Scoblick said. “As a team, we’re together almost all year round. Summer league was going to start up soon. We’d have been going to team camp. It’s a different way of communicating that we’re not used to. I text a lot of my teammates now. We all text and talk.” 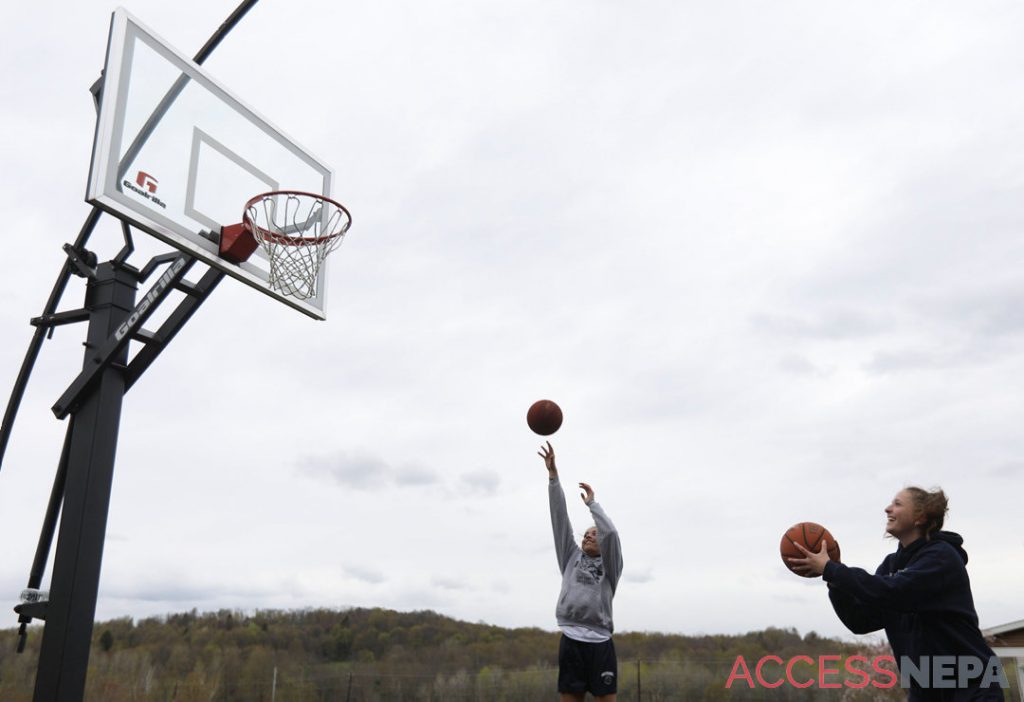 Klingman guided the team through the past few weeks with two of a coach’s best friends: inspiration and perspiration. She’s encouraged them to keep making journal entries to remind them what they should be grateful for, something that helps with weekly goals during the season but has added importance now.

“I usually write in mine every day, things I’m grateful for and my goals to further achieve,” junior guard Clair Marion said. “It helps me realize all the things I have in life and makes me appreciate everything I do have, because there are people out there less fortunate.”

While trying to figure out where best to turn their helping hands, Klingman saw the Lackawanna County Meals on Wheels program was in dire need of help.

“We’re always involved,” Scoblick said. “Coach Klingman does a great job. She always has a lot of fundraisers going. She does have us be hands-on if possible. That’s kind of a struggle right now so we just talked about it at our weekly Zoom meeting. She’s encouraging us to donate and we’re trying to get other teams involved. We’re trying to do as much as possible from home.

“That was kind of one of our main focuses of the year, staying grateful and setting goals. I think coach Klingman has done a good job of not letting that get lost over this.”

Since they can’t deliver door to door, the players followed their coach’s lead to donate to Meals on Wheels, and tagged other teams to help out. The football and seventh- and eighth-grade boys basketball teams joined the effort, just one of the topics covered at the weekly Zoom session.

“We came together as a team and we talk about things we can do, not only to improve upon our basketball game for next season, but also what we can do around our community,” Marion said. “It makes me feel good to help those in need, knowing that my donations are going a long way.”

Hopefully, their coach’s other suggestions will go a long way to staying in shape, and making them better players. Klingman sends out a weekly challenge to the players — emphasis on challenge.

“Two hundred minutes of running or walking for the week. Most of them are running. Running or biking,” Klingman said. “Now, we’re up to 300 pushups, 300 situps, 300 lunges and squats together, and planks. And then we do 30 minutes of agility. All in one week.

“They chart it and then every Monday they tell me who got it done, who didn’t. And then we add the basketball stuff. They have to do 100 minutes of ballhandling, shoot 200 free throws, stuff like that.” 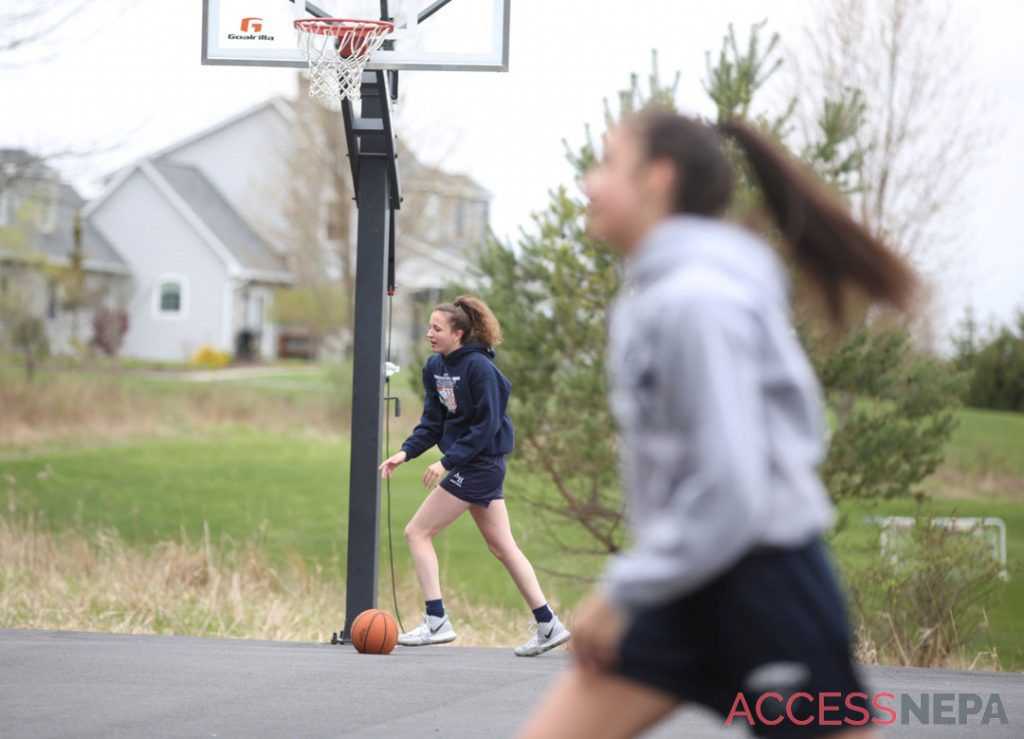 No problem for Scoblick, who has a basketball court with two hoops in her backyard, or for Marion, who makes the 10-minute drive to join Scoblick for what is as important to their mental health as physical conditioning.

“It is honestly so nice because I’m not allowed to see anyone else really,” Marion said. “Going over there and being able to play with her, and not only that, but talk to her from afar, is very nice and I enjoy going over there every day.

“It’s hard to stare at a computer screen all day so it definitely helps to get outside and interact with her on the basketball court.”

The nearly regulation cement court was poured a few years ago.

“It’s awesome, the best thing ever,” Scoblick said. “Me and my sisters are always out there. It’s nice that Clair can come over and stay on her side and we don’t have to distance, because we’re already distanced.”

Every Friday they have a different workout, a team yoga session led by trainer Heidi Peters.

“I’m known for being the least flexible person ever,” said Scoblick, a title Marion also claims as her own. “We actually did team yoga a few times over the course of the season as a bonding activity. I think it was really good that we found a way to do yoga virtually because that’s one of the things that we used to bond in the past. It’s definitely cool that we get to do that again.”

Just one of the many things Klingman is organizing to keep her players upbeat and focused on something other than the nightly news.

“That’s been our thing all year. We did these gratitude journals all year and we did our team goals, and it went right into what’s going on in the world today. I hope they use what they learned.”