Holy Cross hurdler glad to have more track in future

Kate Rogers dedicated herself to this.

She hoped a trip to the state meet at Shippensburg would help her finally leave behind some heartbreak and adversity.
Instead, the Holy Cross senior hurdler spent the weekend at home, disappointed when the reality of a season lost to a pandemic finally hit her. Rogers’ only consolation is her athletic career will continue at Indiana University of Pennsylvania — a reward for hard work that may be more valuable than the state races she hoped to run.

“My mom reminded me this week, that we were supposed to be in Shippensburg at states this week,” Rogers said. “So, it’s been really tough. I kept working out even though we didn’t have a season. I was doing my workouts even though the shutdown kept getting extended, hoping we would have a season and because I already knew I was going to run in college so it was good or me.”

Throughout her high school career, and last season in particular, Rogers faced even more obstacles than the barriers she usually clears in the 100-meter and 300-meter hurdle races for the Lady Crusaders.

She followed in the footsteps of her mother, Ann Marie, who competed in the hurdles for Valley View and coached her daughter at Holy Cross.

As a freshman, competing at the Phil Tochelli Junior High Championship meet, Rogers won the 100 hurdles in a time of 16.87 seconds.

The next season, while learning as an understudy to teammate Jillian Warabak — who qualified for the PIAA Class 2A Championship meet and runs at Lafayette College — Rogers placed sixth in the District 2 Class 2A final in the 100 hurdles.

“I always looked up to Jillian,” Rogers said. “It was good for me to watch her and practice with her so I could get my three-stepping (in between the hurdles) down. Having my mom as a coach helped, too. She was really supportive.”

By her junior year she expected to challenge for a berth at the state meet.

During the indoor season, however, Rogers felt discomfort in the quadriceps in her left leg, which she uses as the trail leg when clearing a hurdle. That set her back.

She worked through it and finished the indoor schedule, including a personal-best time of 9.53 in the 55 hurdles, even though she never felt 100-percent healthy. 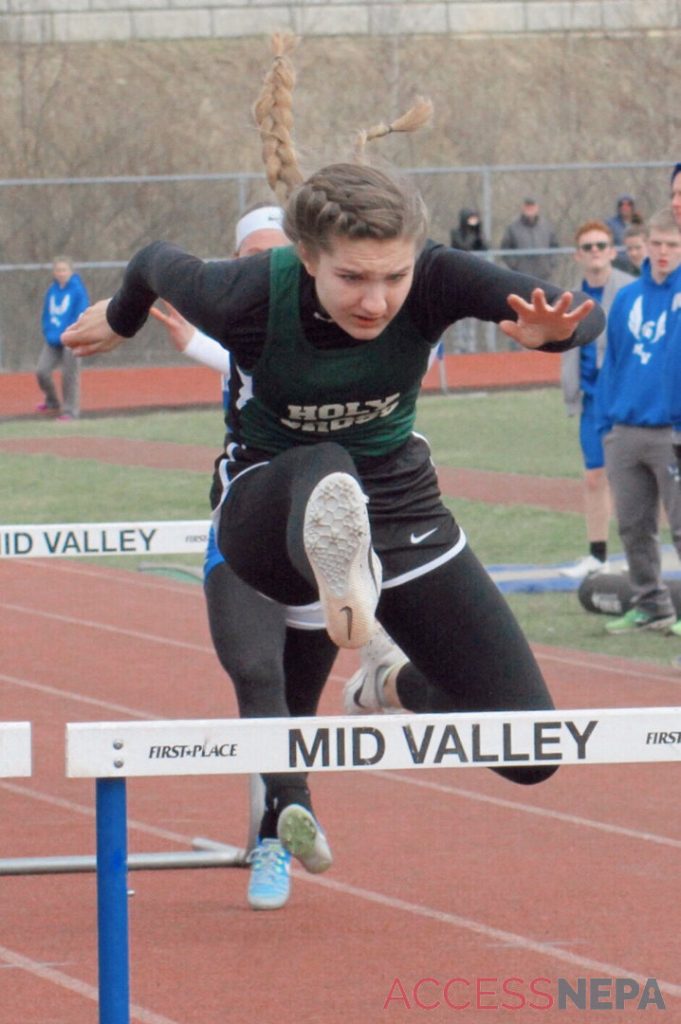 ACCESS NEPA FILE
Holy Cross’ Kate Rogers hoped to be competing in the PIAA Track and Field Championships this weekend.

After a short break, Rogers got off to a good start outdoors. She finished third in the 100 hurdles at the Pennsylvania Track Classic at Plymouth-Whitemarsh High School in the preseason, and posted the best times for the 100 hurdles and 200 early in the Lackawanna Track Conference Division III schedule.

She appeared headed for a rewarding postseason with a win in the 100 hurdles at the James Cross Invitational in Wilkes-Barre with a time of 16.78.

But that injury kept nagging.

“At the beginning of the season it wasn’t that bad, because I took that break after indoor season,” Rogers said. “But, every week it got worse and worse. I was running four events in the dual meets and that started to take a toll.”

At the Robert Spagna Championship meet, on the second hurdle, that quad strain became a pull and Rogers tumbled to the track.

“The quad just wasn’t strong enough and maybe I was pushing too much,” Rogers said.

After some rehabilitation and tolerance to the pain, Rogers took to the starting blocks for the trials of the 100 hurdles at the district meet. She finished the race in 17.53, which left her 10th and out of the final.

“It was very disappointing because I was doing so well at the dual meets,” Rogers said. “I was on the bench after that race with our trainer and she said I didn’t make it. That was really upsetting.”

Also a soccer player, Rogers had a good fall season, but had to overcome a concussion.

Once she did, she got back on the track for another indoor season and had four top four finishes in the 55 hurdles at the Clarks Summit University Run at the Rec series. She had a personal-best time of 10.17 to finish 18th in the 60-meter hurdles at the Pennsylvania Track and Field Coaches Association Carnival.

In the weeks leading up to the start of the outdoor season, Rogers was posting fast times in practice and felt very optimistic.

“I was very excited,” she said. “The week before things got bad with the coronavirus in the country, I was already in the low 16s and aiming for a 15.8 or 15.7 to start the season.”

When schools closed and the season was wiped out, Rogers continued to train. Still, she couldn’t help but think about what could have been.

Now, however, she’s shifting her focus to getting ready for her next track chapter at IUP.

“I am just very thankful,” Rogers said. “I was injured almost my entire junior year and that is an important season to get recruited. There were some setbacks along the way and it was frustrating, but I love track. Fortunately, I had indoor meets and got some times out to colleges and I am headed to IUP.

“I just feel lucky and grateful.”