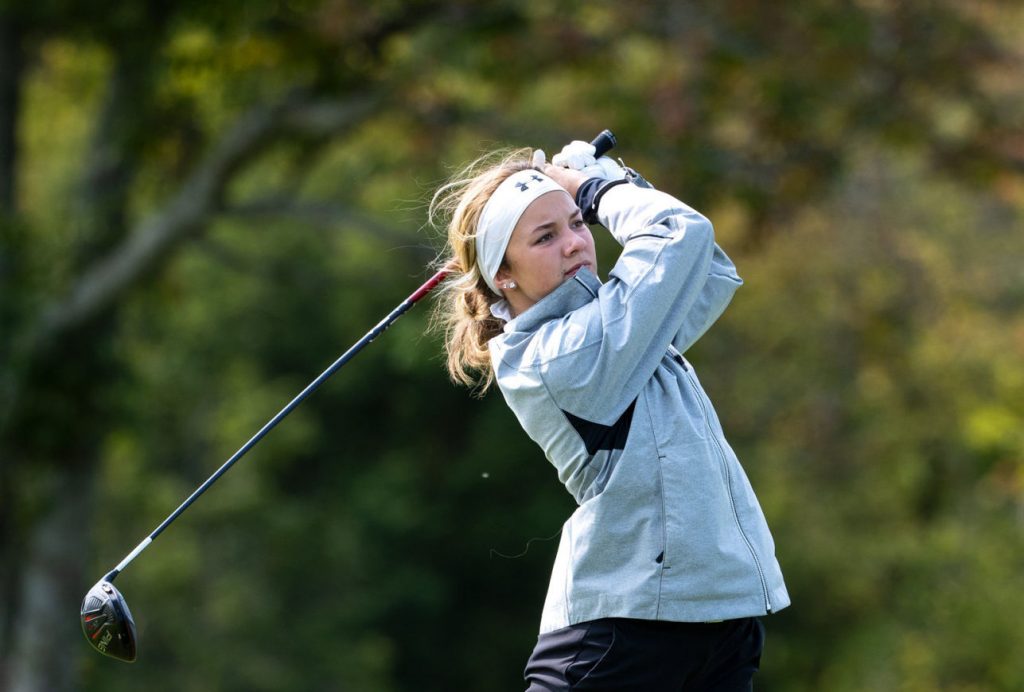 The Elk Lake junior won the Lackawanna League’s District 2 qualifying tournament at Elkview Country Club with a 1-under-par 71, the lowest score of the day for the entire field. Here’s more from her Athlete of the Week interview:
Age: 16

What wasn’t going right earlier in the year? I want to beat everybody that I go against, and I wasn’t doing that. I was beating people, but I wasn’t blowing them out of the water or blowing myself out of the water with my game. So, I was like ‘I need to beat everybody here and I need to do it with a lot of strokes (in between).’ I’m really competitive and when I don’t beat people — I’m not a poor sport about it but that just makes me strive to want to do better. So that’s what I did. 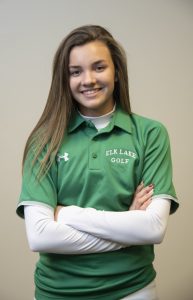 I’m guessing you had a pretty good idea that you were going to be the top female finisher? Yeah, for the most part. I know that, when I left — because we didn’t stay till the very end because there were a lot of boys that weren’t even close to being done — but I knew that I beat all the girls because I was in the group with all the No. 1s and that’s kind of what my competition was that day. But I was shocked to think, ‘Oh my gosh, I (could) even beat Billy Pabst or any of those boys.’ So it was kind of really shocking, but it was like the best feeling ever. It was like, ‘Wow, I really did that.’

Now, will you be rubbing it in to them the next time you see them? Oh yeah. I already have been to (Dunmore’s) Frankie Ruggiero.

It seems like there’s a pretty good group of female golfers right now. Yeah, every single match and every tournament we’re head to head. I was super, super surprised that we weren’t within one or two strokes of each other, because that’s what it’s been all year. So, yeah, there’s quite a few of us that are just, we’re back and forth at it with each other.

Normally you guys only play nine holes. Do you have to make an adjustment when you’re playing 18 in a tournament like that? Personally, I like playing 18 better because it’s like if I do start off bad, I have time to redeem myself. But honestly, I think that I mentally prepare myself for playing nine or 18. I don’t think it really makes that big of a difference to me. But the other girls, I think it does. Some of them aren’t in shape and they get tired by the end, or they’re just not used to playing 18. But, I’m pretty good with that.

I know there were some lengthy backups on the holes. Like 40 minutes a hole, some of them. But honestly, I said to Marty (Myers, Times-Tribune high school golf beat writer), a lot of girls were just so annoyed and stuff, but I was just sitting there playing out all of the ways I could play the hole, like whether I wanted to hit my driver, what club I wanted to use. So, it wasn’t too bad for me. It is annoying waiting, but I don’t think it made that much of a difference on my game. And honestly, sometimes waiting for me is better, because then I just get time to slow down rather than going from hole to hole, going so quick that I don’t have time to process my thoughts. So, I don’t think that hurt my game at all.

Are you looking forward to the postseason tournaments? Yes, I’m so excited. I’m just hoping that I can do what I did on Wednesday or whatever day that was. I think I can. I can do it.

You’re a junior. Are you looking at college stuff? Do you want to golf in college? Yes, totally. I’ve been starting this year more to fill out resumes and stuff. It just stinks that no colleges can really look at me because they switched the rules on that. I think it’s summer of my junior year, so they can’t look at me for another whole year. … I have all my stuff ready. I’m in all these GAP (Golf Association of Philadelphia) tournaments. And stuff, so my name will be out there when they are able to look at me.

How have you been doing at the GAP tournaments? I won one of them at Elkview — I’ve been playing super good at Elkview, I don’t know how or why — but yeah I’ve been right there every single time. It’s within strokes, so it’s like we’re all competing all the time whenever we play against each other. And my coach and I, we looked at girls that went to states last year — which we’re kind of assuming that they’re going to go again this year — we look at their scores every time they have a match or tournament, so I’m right there with everybody.

Do you play any other sports? No, golf year round.

Athletes you admire: Lexi Thompson and Rickie Fowler. They’re just super inspiring and I feel like they’re really hard workers. They’re really driven and they strive to be the best, and that’s how I want to be.

You like the Puma, too, that Rickie rocks? Yes, oh my gosh I love his hats.

Any favorite sports teams? Yeah, I love University of North Carolina. I follow their baseball, and football and basketball teams. I love watching other sports and a lot of my other friends play a bunch of sports, so I’m involved in other sports, I just don’t play them myself.

Favorite food: French fries. I’m not a healthy eater to be honest.

Are we going ketchup with the fries or are we getting crazier? Ranch.

How about three people you’d like to have dinner with? Rickie Fowler, my dad and Lexi Thompson.

Who’s picking up the check? I’ll make my dad do it.

What’s the most consecutive days that you’ve played golf? Oh my gosh, just weeks upon weeks. There’s a golf course right next to our house and we just play every single day 18 holes. So, I’m kind of used to it.

Are you surprised that there’s not, like, 1,000 kids that play high school golf? Because you guys get to golf every day, for free? I know. And it’s just such a fun sport. Even if you’re not super good, you can go and play it while you’re older. My family, my mom and my brother aren’t super good, (but) my dad and I are pretty competitive, honestly. But we do it just so that we can go do something together. It’s just a fun sport, even if you’re not very competitive. So, I’m really surprised because a lot of kids could have fun with it and you can do it with your friends and just do fun stuff. It’s a really good sport to be playing, I think.

So, you’re better than your brother. Is your brother older or younger? He’s 12. He wants to beat me so bad, but I’m not worried because he still plays the red tees and when we officially compete, he’ll be getting moved back.

Do you have any holes-in-one? No!

What’s the closest you’ve come? Six inches, not even. That’s been like that a few times. I’ll get it one day.

Do you watch golf? Can you watch PGA Tour stuff? I love watching golf.

How would you do at Winged Foot this weekend? I think I would literally have a panic attack. But it would be fun to go. I’d still try, just to be with all those players.