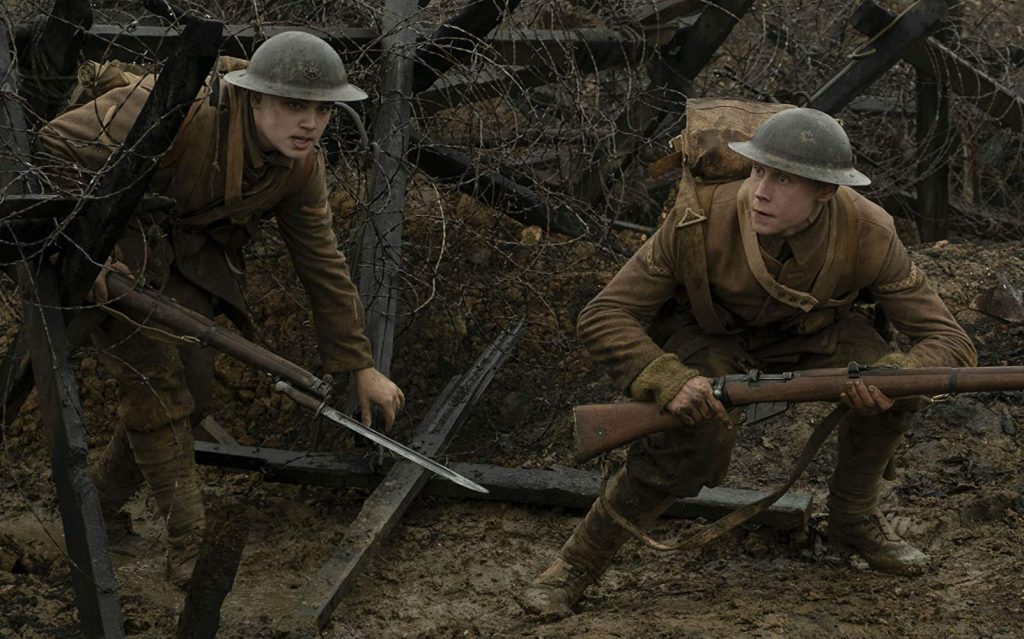 Once upon a time, novelist Alfred Mendes told his grandson harrowing tales of his time in World War I. Decades later, the grandson, now an Oscar-winning director, has distilled the essence of those stories into an imagined tale from the narrow cinematic perspective of one continuous take.

“What I was searching to find was the spirit of the stories he told me, and the sense of how fragile life was in that war,” says Sam Mendes, who co-wrote “1917” with Krysty Wilson-Cairns. “He described how his best friend, the man who signed up with him and went to the front with him, was killed by a direct hit of a shell and literally disappeared, standing next to him. There was no corpse; there was nothing. That sort of thing, at 11 or 12, being born in peacetime, stays with you.”

Mendes says the most important specific detail he took from his grandfather’s stories was “he was small and fast, and the mist hung at 6 feet in ‘no man’s land’; (Germans) couldn’t see his head above the mist, so he would carry messages from post to post. And often the quickest way was to jump outside of the trench and run along no man’s land and jump back in again.”

In “1917,” two young English soldiers (played by George MacKay and Dean-Charles Chapman) desperately carry crucial information miles across what was so recently — what might still be — enemy territory.

“In a war that was really about paralysis when (the enemies) were standing 200 yards away from each other for years, how do you take a long journey? Then we discovered this period in 1917 when the Germans retreated, and suddenly they were cut adrift in this land they had fought over all those years,” says Mendes.

Though he had crafted a full outline, he experienced paralysis of his own when trying to actually write the screenplay. Enter Wilson-Cairns, with whom he had already collaborated several times (twice on projects that didn’t come to fruition). Luckily, she turned out to be a self-described “history nerd.”

“Yes, a big nerd. A big, big nerd,” she says with a winning smile and lilting evidence of her Scottishness. She admits to Mendes, “When you said ‘World War I’ in that call, I danced.

“I’ve always had interest in world wars, particularly living in the U.K., they’re so present. In every town and village — Glasgow, where I’m from, lost an entire generation. I remember walking by war memorials and seeing my surname on them. So there was always a connection. I was fascinated by people surviving a huge human casualty. How did they deal with it?”

Mendes adds, “She’s the most gruesome — you know, anything graphic in the movie, I had to tame it. Krysty’s taste is to express it fully.”

The 31-year-old veteran of Showtime’s “Penny Dreadful” doesn’t deny that. “I’d always wanted to write a war film, and being a youngish woman, you don’t necessarily get offered those kinds of jobs. When Sam gave it to me, I would have killed someone to do it. I’m so excited by it, to bring all this knowledge I had and crystallize it — as Sam encouraged, to tell this huge, almost unwieldy battle story, but through (only the protagonists’) view.”

Mendes had always envisioned “1917” as one continuous shot. That would immerse viewers in the film’s world, in the literal trenches, in the sometimes literal fog of war, so they would get no more information than the characters had. The film relies, too, on Roger Deakins’ nimble cinematography, which flows seamlessly from the sublime to the hideous, and Dennis Gassner’s magic-trick production design, which incredibly balances form and function.

Given that movie magic stitches together scenes to create the illusion of a single “oner,” the film required very long, unbroken takes.

“There were days when I thought, ‘This is impossibly difficult,’ because you had a 9-minute take, and after 8 minutes and 40 seconds, someone made a mistake and none of it was usable. Even though it was magic, you had to start again,” says Mendes, with rueful laughter from both. “I was on the floor with frustration at times. And you just did it again.”

Wilson-Cairns says, “There would be times when everyone would be gathered around a monitor on a quiet set, going (whispers) ‘Go on George, go on George .…’ You’d feel electricity in the air. And when things went wrong, ‘Aaaaahhhh!’ There was such a shared desire to get it right all the time. It was wonderful.”

When asked what Alfred Mendes might have thought of “1917,” the director smiles.

“He forced me, when I was 12, to sign a contract he’d written up: That I would write my first novel at the age of 18. And I never did. Obviously,” he says with an eye roll, as he and his co-writer laugh. “But I did make this. And I think he probably would have liked it.”

NEPA Film Festival returns this weekend
How to: Watch baseball without cable all season
Comcast launches Disney+ and ESPN+ on Xfinity
‘New Pokemon Snap’ may be just the game for this late-pandemic moment