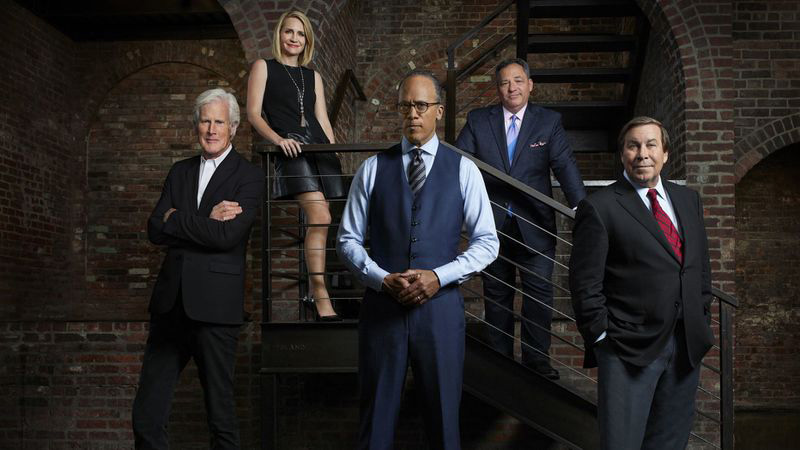 The correspondents of NBC’s “Dateline” got a rock star-worthy welcome when they took to the stage in a packed ballroom at the Hilton New Orleans Riverside Hotel last month, and the attendees of CrimeCon, an annual convention for fans of real-life stories of murder and mayhem, were happy to explain why.

“They are like the Rolling Stones of true crime,” said Greta Griffin, a 32-year-old mother of three who traveled from Springfield, Mo., to see Keith Morrison, Josh Mankiewicz and Dennis Murphy at the event. “Everybody just thinks they are cool.”

Griffin and her friend, Nikki Soda, 40, of Jupiter, Fla., were wearing custom-made white pullovers that pictured Morrison, 72, standing in front of a mug-shot height chart under the phrase, “Talk Dateline To Me.” His rugged, square-jawed face and shock of white hair was also emblazoned on the pop sockets of their iPhone cases.

Many of the CrimeCon fans who lined up for a photograph with Morrison — wearing his signature skinny jeans and Converse slip-ons — asked him to pose with his trademark lean seen on the program.

Murphy and Morrison are old enough for Medicare coverage. Their show “Dateline” first premiered when George H.W. Bush was in the White House. But the newsmagazine has become a pop culture phenomenon, propelled by a growing public appetite for true-crime stories. The enduring success of “Dateline” — one of the most profitable network TV news shows — reflects the growing appeal of the true-crime genre despite big changes in viewing habits.

“Dateline” airs 90 hours a week across NBC, several cable networks and on local TV stations across the country. Through the first six months of 2019, 106 million people have spent at least six minutes watching a “Dateline” episode.

The show has benefited from true crime’s role as a dependable fixture for cable networks that have battled audience declines because of competition from streaming. Channels such as HLN and A&E have seen their ratings stabilize after adding more true-crime series. NBC Universal’s Oxygen remade itself as a true-crime network in 2017 and saw its ratings surge.

Discovery Inc.’s true crime channel Investigation Discovery has been the most-watched entertainment cable network for the 25- to 54-year-old demographic. It also has the highest average length of tune-in of any network: 50 minutes.

Henry Schleiff, the group president at Discovery who oversees ID, said the proliferation of programming choices has helped his channel, which airs repackaged “Dateline” episodes.

“We all live in a confusing world, especially with the number of entertainment options,” Schleiff said. “‘What am I going to watch when? Am I going to binge? ‘Do I watch it on which platform?’ In that world, we offer predictability and consistency.”

The emergence of Netflix as a destination for true crime enthusiasts with such series as “Making a Murderer” and “Conversations With a Killer: The Ted Bundy Tapes” has helped stimulate interest for all of the shows, according to Bill Hague, executive vice president at the research firm Magid Associates.

True crime podcasts such as “Serial” and the Los Angeles Times’ “Dirty John” — both of which had tens of millions of downloads, with the latter adapted into a scripted drama for cable network Bravo — have also expanded the audience.

“These are compelling stories that are authentic,” Hague said. “People like the intellectual exercise of following along and solving them themselves. It’s a category that’s having its moment.”

Hague said local TV stations are also attempting to cash in on the true-crime wave. Station owner Tegna has formed a digital studio that digs into the company’s tape archives for real-life cases investigated by its local reporters. They are being packaged for a weekly podcast series called “True Crime Chronicles,” launched last month.

The passion of true crime fans is evident with the growth of CrimeCon, launched three years ago by the New York digital media and live events company Red Seat Ventures. The three-day convention attracted 3,600 fans, up 20% from last year, who paid $199 and more to meet the stars of “Dateline” and 20 other true crime TV series, the company said.

Many of the attendees were women between ages 30 and 55 who say they personally connect with the female victims frequently depicted on “Dateline.”

“We think ‘that could be me or my sister or my daughter,'” Griffin said.

Tales of romance gone wrong can make some fans feel better about their own lives. “I was out of work for a while and my life was in a bit of turmoil,” said Marian Marshall, 49, of Ottawa, Ontario. “While watching ‘Dateline,’ I felt ‘at least I wasn’t murdered.’ It shouldn’t be comforting. But when you watch it, it’s comforting.”

Mankiewicz, 63, believes the open-and-shut cases on “Dateline” are satisfying in an increasingly chaotic time for the country.

“I think people like seeing the system work correctly,” he said. “They live in a world where nothing works the way it’s supposed to except at Friday nights at 10 when that scoundrel gets what’s coming to him.”

Over time, “Dateline” fans have become attached to Mankiewicz and his fellow crime storytellers, as NBC had made the series ubiquitous.

NBC News produces 100 new hours of “Dateline” each year. This summer it airs four hours a week on NBC, including repeats. In the fall, the show will expand to two new hours every Friday.

The series averages around 3.5 million viewers an episode on NBC — a respectable number for Friday nights. But unlike other news programs that typically have a brief shelf life, the yarns on “Dateline” have no expiration date. “Dateline” repeats can be watched and re-watched. Nearly every criminal case they cover concludes with a verdict.

The production and writing aims to keep viewers hooked as if they were watching a mystery movie. The show’s promotional tagline is “Don’t watch alone.”

“If there’s no resolution, the viewers are not very pleased and you hear about it immediately from them,” said “Dateline” executive producer Liz Cole.

The approach has made “Dateline” a thriving business.

“Dateline” episodes going back to 2011 air on parent company NBCUniversal’s MSNBC, USA and Oxygen cable networks. NBCU also has a deal with Discovery Inc., which runs repackaged “Dateline” episodes on its own true-crime cable channel Investigation Discovery as well as OWN and TLC.

“There have been points where we’ve wondered ‘are we putting the program in too many places?'” Cole said. “But we don’t really worry about that anymore. It’s just expanded the number of people who are interested in watching the program.”

The expansion continues, with NBC now offering audio podcast versions of “Dateline” episodes that can be downloaded for free.

While NBC won’t reveal financials for “Dateline,” research firm Standard Media Index says the program took in $127.3 million in network and syndication ad revenue in 2018, up slightly from 2017. With each hour costing less than $400,000 to produce, by some estimates the program is generating over $100 million in annual profit.

Flaws in the criminal justice system are occasionally examined on “Dateline.” Longtime “Dateline” producer Dan Slepian has helped exonerate wrongfully convicted criminals and hosts a podcast called “13 Alibis.” The podcast follows the case of Richard Rosario, a New York man imprisoned for 20 years for a 1996 murder case, even though he claimed to have 13 alibi witnesses.

Slepian’s series has 500,000 downloads. But the streaming audience and podcast listeners tend to be younger and perhaps more skeptical of the justice system. The true-crime TV viewer is typically more interested in seeing criminals punished.

“It’s not reassuring that you can be locked up for something you didn’t do or that the police let this guy down,” Mankiewicz said. “Better to think that if anything happens to me it will get solved, I’ll be avenged and my family will feel some justice.”

“Dateline” premiered in 1992 when NBC newsmagazines sprung up as a cheaper alternative to scripted programs before reality TV took over. The program was similar to CBS’ “60 Minutes” with several segments per show, ranging from in-depth investigations to interviews of politicians and celebrities.

In 1994, “Dateline” began to devote one-hour and two-hour episodes to single cases using Court TV footage (NBC was part owner at the time), and they became a staple of the program. Over time, “Dateline” used less courtroom footage and more original reporting on cases.

The popularity of newsmagazines waned in the mid-2000s, but true crime stories continued to be strong draws. By 2006, NBC’s “Dateline,” as well as its competitors “48 Hours” on CBS and “20/20” on ABC, devoted most of their episodes to the genre.

David Corvo, senior executive producer of prime-time news for NBC, credits the role of correspondents who were encouraged to tell the tales of murder and missing people in their own voices.

“Dennis Murphy was really the founding correspondent of this genre,” Corvo said. “He said, ‘I’d like to take the first couple of pages of the script and kind of put it in my perspective.’ And I said, ‘No, do that with the whole script.'”

Murphy brought a just-the-facts-ma’am snappiness to his stories, and the others followed suit.

Mankiewicz became the skeptic who sounds like a tough-guy character in a film noir feature when he delivers snarky questions.

Morrison, the son of a minister, recounts grisly cases as if they were fables with a larger meaning.

Andrea Canning, who missed this year’s CrimeCon because of the birth of her sixth child, is the empathetic interrogator whether she talks with victims or suspects.

Morrison — a onetime news anchor for KNBC in Los Angeles and the Canadian network CTV — became the show’s breakout character after his mellifluous baritone delivery was parodied by Bill Hader on “Saturday Night Live.”

While the sketches portrayed Morrison as a creepy voyeur, Hader is an unabashed “Dateline” fanatic. He was speechless at a surprise meeting with Morrison, recently set up for a segment on NBC’s “Sunday Today.”

Hader also does spot-on impersonations of Mankiewicz, Murphy and “NBC Nightly News” anchor Lester Holt, who introduces the “Dateline” stories that air on the network.

Numerous other celebrities have gone public on social media with their “Dateline” obsessions, including pop music icons Taylor Swift and Lady Gaga, and actresses Kristen Bell and Kristin Chenoweth.

Morrison believes the cult following has extended his career, although he finds the idolatry a bit terrifying. “I’m 72 years old and there are kids coming up to me saying, ‘I loooove you,'” he said.

Some fans at CrimeCon even came bearing gifts. Mankiewicz received pocket squares, which have long been part of his on-air wardrobe. Last year, Canning was presented with a needlepoint rendering of the white pants she has worn on the program. It was inscribed with the moniker “Queen Andrea.”

Canning’s gift came from a team of Los Angeles women in their late 30s who go by Kimberly and Katie. They break down every “Dateline” episode in obsessive and often irreverent detail on a regular fan podcast called “A Date With Dateline.”

“We see the show as an educational tool,” said Kimberly, who asked that her last name not be revealed. “Stay in your house. Don’t date. Don’t drink anything your spouse gives you. Don’t get life insurance. Stay away from stairs and bathtubs.”

This year at CrimeCon, the “A Date With Dateline” team interviewed its favorite correspondents for the podcast. The pair asked for advice about how to prepare themselves for becoming a true-crime story subject.

“If for some reason Kimberly or I would be gone tomorrow, what would be the one thing we should do today?” Katie asked.

“We need your high school yearbook and snaps of you in happier times,” Mankiewicz said.