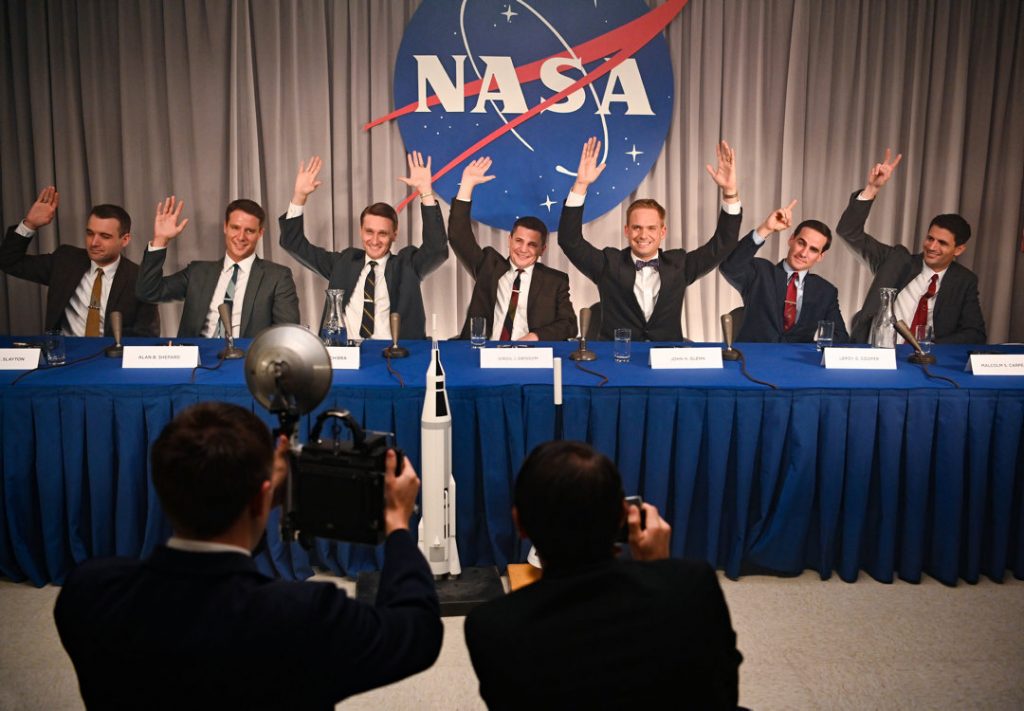 Tom Wolfe’s “The Right Stuff,” which tells the story of the test pilots who became the first American astronauts — and was previously a big, long, A-list film directed by Philip Kaufman — has been adapted again as a smaller, longer B-list TV series by Disney+. From the five episodes (out of eight) available for review as of this writing, one may reasonably wonder why they bothered, apart from the fact that someone owns the rights to a prestige brand and that what looks good on paper and in executive offices sometimes looks less good in execution.

Still, it has been awhile since the last historical space-race series — ABC’s “The Astronaut Wives Club” in 2015 and HBO’s “From the Earth to the Moon” before that in 1998 — so if you are a Disney+ subscriber looking for something relatively grown-up to watch or would enjoy a basic primer on the human side of NASA’s infancy or are a space race completist, have at it. It will do you no harm.

Produced by National Geographic, Warner Horizon Television and Leonardo DiCaprio’s Appian Way Productions, “The Right Stuff” is not bad, or even boring, just thin and unconvincing. Its budget shows, in the negative sense, and its best points are to be found here and there in small things — individual performances, selected exchanges and assorted old gewgaws and gadgets that decorate the screen.

The series focuses on three of the seven Mercury astronauts: Alan Shepard (Jake McDorman), John Glenn (Patrick J. Adams) and Gordon Cooper (Colin O’Donoghue). Shepard and Glenn, the two fliers most likely to be chosen the first to go into space, are each eager to be that guy; Cooper is interesting to the filmmakers mostly because of his messy personal life and for his wife, Trudy (an affecting Eloise Mumford), who was a pilot as well and who gets a bit of a storyline of her own.

You are not being shown so much as told a story, propelled by great bursts of expository dialogue. Some of it may be true — that some of it is not exactly is announced at the start of every episode — and perhaps you will be moved to do some independent reading on the subject to winnow fact from fiction. Trivial if not uninteresting facts are alluded to: Glenn played the trumpet; filet mignon was on the menu the morning of the first American manned spaceflight, potentially a last meal. From my own casual winnowing, the series seems basically true to the record. (I could not ascertain whether Wernher von Braun, played by a blustery Sacha Seberg, dressed as Santa Claus over Christmas 1959.) And yet rarely did I feel I was seeing something close to actual, any more than watching a middle-school performance of “Cats” might make you believe you were on Broadway.

Shepard and Glenn are a study in opposites, the Lennon and McCartney of the Mercury Seven. Glenn is abstemious, churchgoing, devoted to his childhood sweetheart wife; Shepard lives the rock star life away from his wife, Louise (Shannon Lucio), drinking and philandering and cruising Florida’s Cocoa Beach in a Corvette convertible. Glenn, who knows what to say to a reporter, is the popular face of the space program, conscious of public opinion; Shepard doesn’t care what anyone thinks of him, but he has the authority of an outlaw. Where the other astronauts look upon Glenn as sanctimonious, he finds them incautious. We’re given enough to see that Glenn can be a little weird and that Shepard has layers — he has a worse jerk for a father, who comes to a holiday dinner in full dress uniform, the better to belittle him.

Period pop songs set scenes in conventional ways. Much happens offstage, to be reported on later, like a battle in a Shakespeare play — which is just as well, because the visual effects tend to look like visual effects, crowd scenes are underpopulated and NASA facilities can feel threadbare. (Perhaps they were, at first.) We see more of the astronauts in swimming pools than training for space. But they are nice-looking pools. Many interior scenes are shot in low light, as if it were too expensive to turn on a lamp, and maybe it was — scrambling for funding is a theme here. The agency, in more or less continual crisis mode, is represented by Eric Ladin as flight director Chris Kraft, Patrick Fischler as Space Task Group Director Robert Gilruth and Jackson Pace as Glynn Lunney, just a kid wet behind the ears. As Dee O’Hara, Mercury’s staff nurse, Kaley Ronayne does good work and provides low-key sympathetic support to McDornan’s Shepard.

The more consciously dramatic the writing, the bigger the action, the less convincing the scene; even the domestic business between the fliers and their wives can feel made to order, inorganic. But every now and again, “The Right Stuff” takes a breath and lets life roll on a little. Its best moments are small and quiet and have little or nothing to do with the space race (or the race to be the space race ace). An encounter between Glenn and a woman named Dot (Courtney Halverson) he meets while checking out a Bible group, in a bowling alley, does not much more than underscore Glenn’s decency, but it feels wholly alive. Halverson, whose subtlety lends substance to her brief appearance, does have something to do with that, but it works well too for Adams, whose conception of Glenn is interestingly delicate. (When he does pop, it registers.) I could have watched them for an hour.