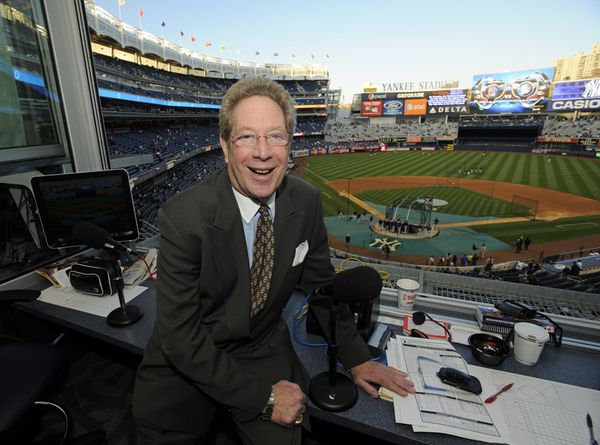 He says he’ll be back soon, and that’s the good news. But it’s plenty OK to miss John Sterling while he’s gone.

After all, he’s never gone.

At some point — most likely today — a Yankee will hit a home run and even if it’s hit high, far and gone, Sterling won’t go into his patented home run call. Which stinks, because he has turned Yankees home runs into theater.

So today, we celebrate Sterling by going over my choices for his Top 10 home run calls. Hopefully, this carries us all through the next week. Will it work? Who knows? After all, a wise man once said, “You can’t predict baseball.”

No. 10 on a top-10 list is always the most difficult, because are, like, five other things you want to recognize and don’t have the room on the list to do so.

But, Sterling’s home run call for McCann wins out, because I don’t think I’ve ever heard it and not laughed. Combines everything Sterling is about: A traditional old song, a Yankees home run and a connection nobody has to ask their grandmother to make between the two.

Here’s what I love about Sterling: He probably loves the Yankees more than the Yankees’ most ardent fans do. And he has trouble containing the excitement that comes with that devotion at times. I always loved his Abreu home run call, because…well, I thought he loved it. Combines a great nickname — El comadulce — with a great phrase and Sterling flair. Whether an Abreu home run won the game or cut a Yankees deficit to 10 runs, Sterling always seemed excited to see Bobby hit one into the bleachers.

When the Yankees get a new slugger, everyone kind of wonders what Sterling’s home run call is going to be. Sometimes, though, the right call is the obvious one. This is Sterling at his best, reveling in simplicity.

This one…makes no sense to me. Never did.It didn’t mention Cano’s smooth, powerful swing. Didn’t acknowledge, in any way, his greatness or his ability to deliver or come through in the clutch.

I love it anyway. I think I probably underrated it on this list.

If you don’t know, know you know.

Most will rank the A-Rod home run call higher, because I’m guessing it’s the one Sterling has used most over the years. But I think the most amazing part of it was, there were two Sterling home run calls for A-Rod that were worthy of making the list. I was always partial to “Alexander the Great conquers again!” But, you know, the people have spoken. And Sterling is a man of the people.

There were so many ways Sterling could have gone here. Maybe too many. This is an example of a call Sterling easily could have screwed up and hit so high, far and gone over the wall that his call pretty much became the identity of the player from a marketing standpoint.

One can argue that the Yankees’ most underrated star ever was Matsui. He was clutch. He was internationally beloved. He was a winner. He was productive from the start of his career to the end. A worth-every-penny investment. Sterling had a classy, exciting call for his biggest moments, too.

Who would think to take a sunrise and sprinkle it with dew? Cover it in chocolate and a miracle or two?

When you take a Sammy Davis Jr. song from Willy Wonka and the Chocolate Factory and use it as an excuse to sing in celebration of a home run, that’s sheer brilliance. This is the McCann home run call on steroids.

An over-the-top, theatrical, steal-the-moment home run call for millennials. Oh, John Sterling, you’re a man who embodies all the generations.

For my money, this is the best individual home run call of all time. It’s so New York. It’s so Sterling. It was so new and exciting during a time when that Yankee team was still so new and exciting. Just a classic from the first time you heard it. You wanted Bernie to hit a home run every time, just so you could hear the words. And Sterling did more than say them. He made you feel them.