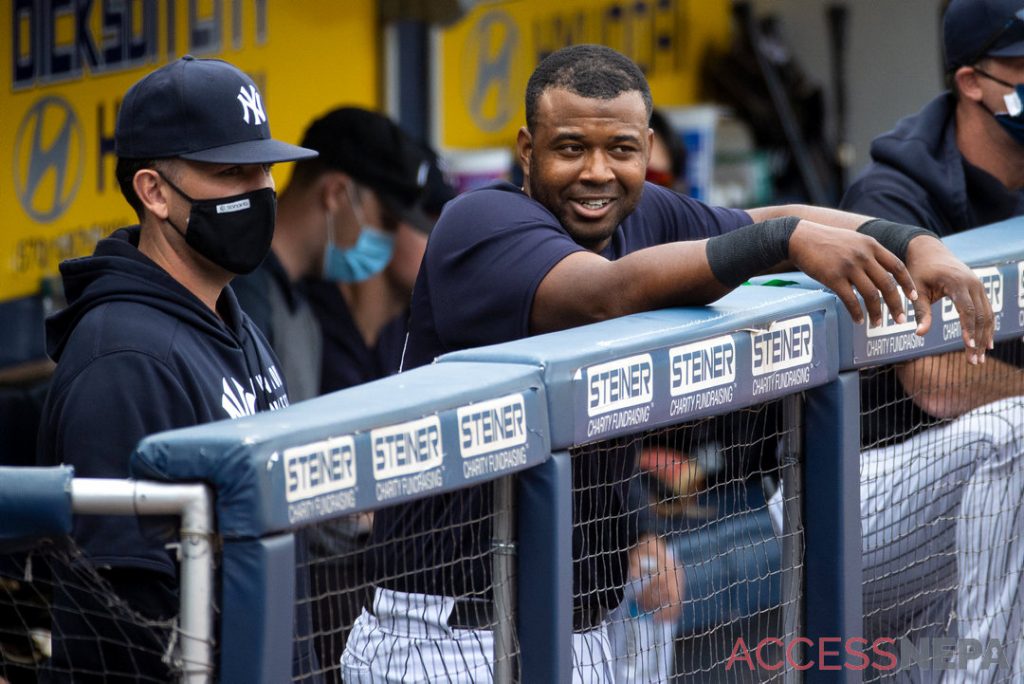 From an offensive standpoint, things are going pretty well this season in the New York Yankees’ farm system.

Access NEPA recently talked with Dillon Lawson, the New York Yankees’ hitting coordinator, to discuss what’s behind the team’s success after a year without minor league baseball, and what some of the RailRiders’ top players can do to get even better.

AN: We talked about the whole “Hit Strikes Hard” philosophy before the season. And I’m sure that other affiliates are kind of fitting that bill, too, but just watching the RailRiders every night, are they a good representation of of everything you want that philosophy to be? They don’t strike out much. They walk a lot.

DL: They do a great job of controlling the strike zone and they have the ability to impact balls. But I think what’s most impressive is that it’s in Triple-A, a level in which most players are playing at just because they are good enough. And here, we have guys playing here, because they are good enough, but they are now getting better. You see guys, whether it’s having a career-high walk rate, or a career-low strikeout rate or career-high impact. Whether that’s — some of these guys, they might not max out in exit velocity as a 26-to-30 year old. That’s not the expectation. But I think that there’s always room for us to square the ball up more, which in turn is going to increase average exit velos, like how often we’re hitting balls with high exit velos.

And so we’ve got countless guys in this lineup that have made these types of improvements at the second-highest level of professional baseball. And I think that that’s impressive, and kudos to them for all the work that they did in 2020, but (also) all the work that they continue to do here with (RailRiders hitting coach) Casey Dykes.

This group is very focused. I mean they know how to have a lot of fun. Winning helps that. But they also know when the switch needs to be flipped and it’s business like. We have true, true professionals on this team. Guys with big league experience, guys that don’t have big league experience yet, but that are true professionals about it. I mean, it makes everybody’s job a little bit easier.

AN: With the bigger rosters, what’s gone into balancing the workloads so that really nobody, outside of maybe one or two guys, has ever really been in a prolonged slump this year? The playing time hasn’t been regular, but the production has.

DL: I think a lot of that has to go with the preparation. And it’s basically connecting what they’re doing in the cage with Casey Dykes to the pregame reports and then paying attention during the game so that way, when their at-bat does come, they’re as ready as they possibly could be. And I think that maybe one of the best things that Casey has done is he’s bridging this gap between just like, the way that we train, which is, we’re attempting to train more game like, but then to also do it in a way that it’s aimed at that, the pitchers that they’re going to face.

And so everybody’s got their routines and baseball’s very traditional in that way, that you’ve got hitters that are going to go through their routines and do the same thing every single day. We’ve got to stick with that, whether we’re playing that night or not. And these guys do.

And then we also are making sure that they’re still getting the more intense type of training, whether it’s against pitching machines, or seeing mixed pitches, whatever it is. It’s trying to create some sort of bridge from the training environment to the game, and connecting the cage to the advanced information to observing the game in the dugout, and then finally getting your name put in the lineup.

AN: You just said a bunch of inside-baseball-type hitting things, but then when those guys go on the field, people who loved the way baseball was played 40, 50 years ago could probably watch the 2021 RailRiders and love the way that they play the game, too. Analytics turns some people off, but the ultimate goal of it is to just do what Ted Williams was doing when he played.

DL: For us on the offensive side of things right, like run differential, analytics, all this type of stuff, that leads to the most wins. And so from an offensive standpoint, what is our responsibility in this whole run differential equation? It’s to score the most runs possible. And the way that Chris Gittens scores runs is wildly different than the way that Hoy Park scores runs, or Robinson Chirinos scores runs. But it’s finding the way that these guys can do that at the highest level. And some of that might actually incorporate saving runs on defense and highlighting that aspect of Andrew Velazquez’s game.

And so, it’s because of that, I think that you see a team that isn’t — and they’ve obviously got the pieces to do this — which is they can play a variety of styles. One lineup might be more geared toward the home runs; the other one might be more geared toward contact, stolen bases and good defense. But it’s trying to, especially for us because we have so many great pieces at the major league level, it’s trying to just increase the options for our big league team to take a player that plays this style, or that’s needed most at that time.

AN: What’s the next step for Hoy Park in his incredible season?

DL: Look, I don’t know what more he necessarily has to do from an offensive standpoint. He’s extremely versatile. He can handle a lot of different styles of pitching. He can hit the ball hard, he can find green grass with the best of them. He can take his walk. And then he plays a variety of positions. Like it’s not many people’s strength, but I surely would say that his is versatility, and to be a really good performer in a wide range of roles.

And so, that’s Hoy’s identity. It’s almost this chameleon. And, so I mean, the guy’s awesome. I love him. Just really, really excited for him to have this opportunity and to be able to string two months together like this and on his way to having a really, really strong season.

AN: Are you guys pretty happy with Estevan Florial’s last 10 games here? He seems to be coming out of whatever slump he started with at Triple-A.

DL: Yeah, I mean, of course. Like, Flo’s incredibly gifted and has major league tools and major league skills already. It’s really now, being as young as he is at this level, it’s about finding ways to show that off more consistently against a wider range of pitchers and pitch types and things like that. So he’s starting to settle in. He’s really figuring out the best way for him to prepare in the cage and gameplan before starting these ABs. I’m excited for his stretch. I’m excited to see what the next month brings, as I know that he’s going to continue to — the guy’s a tireless worker. I wouldn’t call it obsessed, because that has a bad connotation. But he is, I like the word maniacal. He’s super, like when it’s time to work, he’s intense. He’s super focused. He’s got purpose. He knows where he wants to be. And there just isn’t going to be anything that can stop him from accomplishing that. And I think the last 10 games, it’s been a product of the work that he’s been putting in behind the scenes.

AN: How about Trey Amburgey and his consistency? His on-base streak went up to 38 consecutive games on Saturday.

DL: I think you just know what you’re going to get from him. And the thing that makes Trey different is that the thing that you’re going to get is super-high quality. And he’s a guy that can draw a walk. And I don’t know if that’s his skill, or if it’s because he’s hitting so many strikes with authority. But he’s created this situation for him where if they don’t throw him the pitch that he wants, then he’ll take his base, and then he gets on base. … So he’s got a variety of ways to score runs. And sometimes that is drawing a walk and scoring that way, or the other way might be hitting a double with two guys on, or maybe he just takes it in his own hands and hits home runs. I thought his 2019 campaign was special. For him to continue making strides and elevating his game and hitting balls even harder than he was then, it’s really impressive.

AN: Last one. Chris Gittens — he’s kind of had a couple lengthy breaks this year with his son being born, and going up to New York and playing sporadically. But then when he comes back down, it’s like he’s right back in it. Has either surprised you or impressed you about him this year?

DL: It’s impressed me, but it doesn’t surprise me. It does go back to this: It goes back to, No. 1 having confidence. No 2, being good with just controlling what he can control and taking care of the things that he needs to at that given time. He needs to take care of his family and he needs to be there for those moments, and I’m happy that he’s had the opportunity to do that. And then when he gets back, he’s able to switch it and do what’s asked of him on the baseball field. I’s confidence, but he’s really good, so there’s already like this whole skill component of it. Like, his bad days are still better than anything I could ever dream of for myself. And then the fact that it’s just, he prepared differently this offseason, put himself in better shape than he’s ever been in. Worked against velocity machines much earlier than he had ever done. He’s continued that same process. What’s getting hard on our end as coaches right now is finding ways to continue to make the training difficult — obviously, within reason, they’ve still got to have some success. But how do we get Chris Gittens even better? How do we get Trey Amburgey even better?