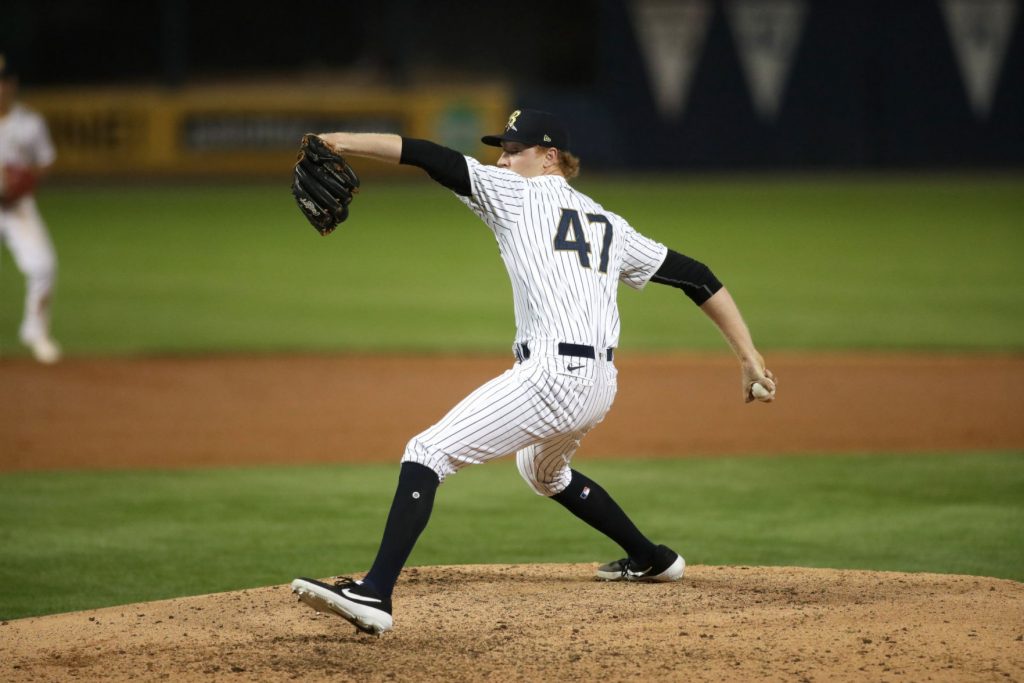 Scranton/Wilkes-Barre is back home today for the first time in more than two weeks, and the RailRiders will have a couple big leaguers in their lineup when they start a series against the Buffalo Bisons.

Yankees shortstop Gleyber Torres joined the club after one game with Double-A Somerset and is slated to play all seven innings of the first game of Tuesday’s doubleheader. He’s joined by righty Mike King, who will start the first game and is scheduled to pitch just one inning ahead of Clarke Schmidt.

The 24-year-old Torres has been on the injured list since Aug. 9 with a left thumb sprain, but Yankees manager Aaron Boone said they expect him to return by the end of the week. Torres went 1 for 2 with a home run and two walks in his game with Somerset. He hasn’t played a game with with RailRiders since April 21, 2018. He made his MLB debut the next day. Torres did, however, make a stop at the alternate site at empty PNC Field last year.

King, 26, has been out since July 8 because of a right middle finger contusion. The Yankees moved him to the 60-day injured list July 27.

Stephen Ridings, who has been on the RailRiders’ injured list since Aug. 23, is progressing back to game action.

“Ridings is full go,” RailRiders manager Doug Davis said. “Had a little issue with his elbow, not structural at all, so he’s just working his way back.”

Ridings is already playing catch, Davis said. The tall righty had a 1.80 ERA in five games with the Yankees before being sent down Aug. 17.

First baseman Chris Gittens, on the injured list since Aug. 23, took batting practice Tuesday (and put a ball off the scoreboard). Gittens, who has been hampered by Achilles tendinitis at points throughout the season, is currently sidelined with a muscle issue between his hamstring and quad, but it sounds like he’s close to a return.

“It’s in the middle, something,” Davis said. “It was a very small area.”

Outfielder Ryan LaMarre hasn’t been on the injured list, but he was limited to just two games on the RailRiders’ two-week, two-city roadtrip: Aug. 19 and Aug. 25. He’s back in the lineup for the first game Tuesday.

“He had a bad toe,” Davis said. “It really, it wasn’t turf toe, it was a different place. He tried a couple times to play. The one time, I had to take him out of the game, and then I had him in the lineup again and in the dugout, he said ‘If I play, I know I can’t go nine innings.’ I said ‘Well then let’s not. Let’s get to the point where we can go nine innings.'”

Because it’s a doubleheader, LaMarre will only have to go seven innings in his return.

Catcher Max McDowell, who on Sunday was hit in the head by a fastball from Lehigh Valley reliever David Paulino and then charged the mound, was suspended three games for his role in the incident that saw the teams’ benches empty. Paulino also drilled RailRiders outfielder Estevan Florial with a pitch during an alternate site exhibition game in April after he allowed a couple of home runs.

McDowell posted this to his Instagram after Sunday’s game:

Max McDowell, who was hit in the head by a pitch today in the RailRiders’ game against Lehigh Valley, just posted this to his Instagram: pic.twitter.com/VBMSNFwpuS