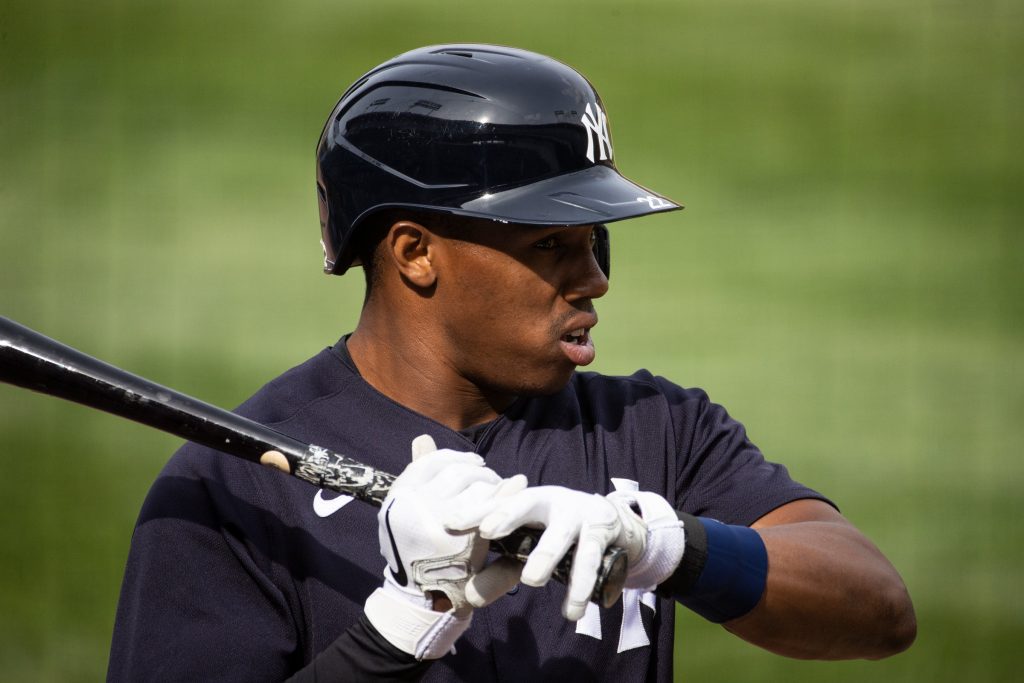 Some pregame notes before the Scranton/Wilkes-Barre RailRiders (13-5) prepare to open a homestand against the Buffalo (Trenton) Bisons (Thunder) (11-7).

– Outfielder Trey Amburgey took batting practice on the field as well as participating in defensive drills. He’s been on the injured list since May 12 with a groin issue.

“I think he’s several days away. He’s close,” RailRiders manager Doug Davis said. “He feels good. Everything that he’s done, really for the last week building up to today, it’s all been positive. He hasn’t had any setbacks. He hasn’t had any issues with the groin. He’s getting stronger and you can tell, because just the intensity level that he puts into his daily workout continues to get better. So, yeah, he’s not far away.”

That should be welcomed news for the New York Yankees, whose outfield depth has been sapped by injuries. Amburgey, 26, isn’t on the 40-man, but he was one of the RailRiders’ best hitters when he got hurt running to second on a double. In six games, he was 10 for 22 (.455) with three homers, three doubles and 12 RBIs. Amburgey plays all three outfield positions, but you’ll mostly see him in the corner spots. With SWB in 2019, he played 70 games in right field, 39 games in left and 16 in center.

– Outfielder Greg Allen did some strength and conditioning work Tuesday, but he’s still a little ways away from returning to games after he landed on the injured list May 16 with an oblique issue.

“I think Greg’s is one, with the oblique, that you just have to really be careful with,” Davis said. “I mean, he’s doing just about everything other than swinging the bat and doing any rotational moves right now. So, he’s a little bit farther out.”

– Infielder Kyle Holder, who turned 27 on Tuesday, is getting better after injuring his knee sliding into second base May 12.

“He’s a little ways away, too, because that was pretty impactful on his knee and that whole area,” Davis said. “He’s got to work his way back to where he can run, he can make those quick directional changes and do it quickly. From an infield standpoint, he doesn’t play a straight-ahead position. It’s going to take him a little bit. But he’s not — I mean he’s definitely improving as well. Most of the soreness that he had from the beginning is working its way out.”

– Infielder Derek Dietrich returned to the RailRiders lineup Tuesday for the first time since May 16. The Yankees put him on their taxi squad for their roadtrip for Texas, then kept him for a couple extra days just in case. By the time they were ready to send him back to SWB, the RailRiders were ready to wrap up their Rochester trip and return home.

– First baseman Chris Gittens rejoined the team after being away for the birth of his son. He took batting practice Tuesday and Davis said he should be back in the lineup Wednesday. He hasn’t played since May 16.

“I just wanted to give him a day because he hadn’t been us, he hasn’t been with a team. I would imagine his sleep habits have taken a little bit of a hit. So, yeah, it was more today just to try to get him back on his feet, get some baseball activity. Yeah, he’ll be back in there tomorrow.

Back to the start

Nestor Cortes Jr. makes his first start of the year Tuesday. Davis said it with all of the regular starters having three or four games under their belts, it made sense to give Cortes a start and that they’ve “sort of been building him up for this.” If one of the RailRiders other starters, like Deivi García, is ever needed in New York, Cortes would be the guy who slots into SWB’s rotation. So, giving him a start allows him to get stretched out a little more.

Cortes has been one of the RailRiders’ best pitchers this season. In 11 innings, he’s allowed two runs — both came on a walkoff home run by Rochester’s Luis García on May 20 — on four hits, walked one and struck out 15. Cortes is typically at his best when he’s wearing a RailRiders uniform (he has a 3.04 ERA in 46 games and 31 starts here), but he’s looked particularly locked in this year.

“I think definitely his determination level has taken an uptick a little bit,” Davis said. “His velocities have increased a bit, which I know he’s very happy about and I think the Yankees are as well, because that just gives — that’s another left-handed bullpen starter, swingman that they have sitting here if they need it.”