Scouting the opponent: The Buffalo Bulls 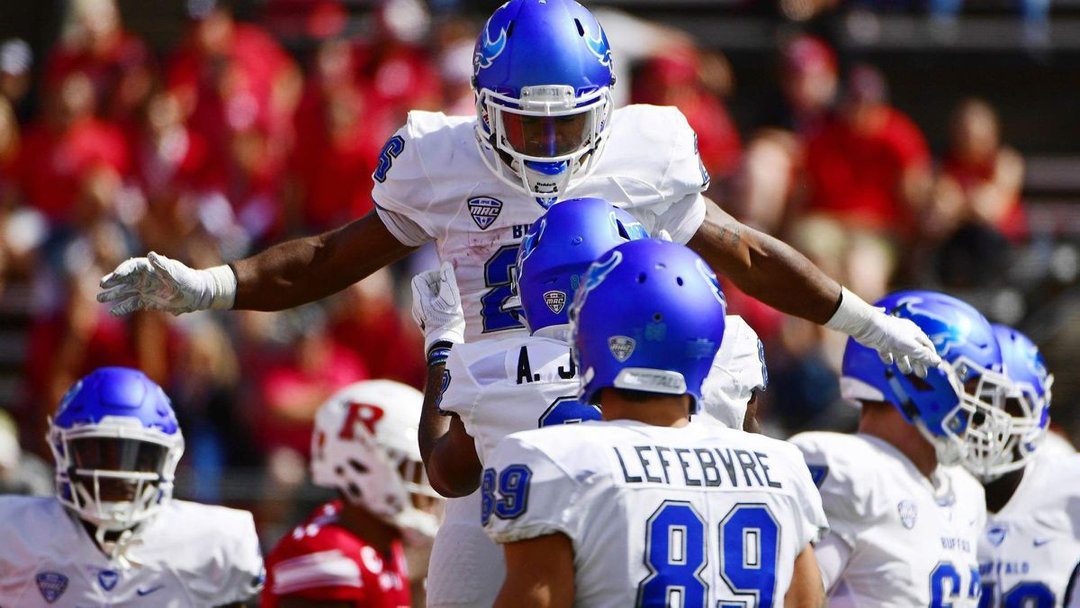 The Bulls are young and inexperienced here, as two starters transferred in this season from junior colleges and the other is a true freshman. Only three wideouts on the roster have a career catch, and the most experienced of those – junior Antonio Nunn – missed the opener against Robert Morris with an injury. The other two receivers who have made their way into the box score – Tito Overton and Marlyn Johnson – each have one career catch. However, TE Zac Lefebvre had two touchdown grabs last week and, at 6-foot-6, will provide Buffalo a size advantage in the middle of the field.

In his first career start against RMU, redshirt freshman Matt Myers threw all of 10 passes. He completed five, but Penn State coach James Franklin admitted it’s difficult to get a gauge on what the first freshman QB to start on opening day for Buffalo in 28 years can really do. It’s not the same situation, though, with the Bulls’ backs. Jaret Patterson is a sophomore who rushed for 1,013 yards last season and won MAC Freshman of the Year honors. He had just 12 carries against RMU but dominated the game. Backup Kevin Marks rushed for 845 scores and 13 touchdowns as well, and he gets a good amount of playing time even with Patterson the offense’s focus.

Really, this group makes Buffalo go on offense. The tackles, Evin Ksiearczyk and Kayode Awosika, are two of the better run blockers in the MAC and they both protect the passer well. Guards Paul Nosworthy and Tomas Jack-Kurdyla are athletic and physical inside.Center Mike Novitsky started his first game in the opener, and he played well. But this will be a much bigger challenge for him. There’s not much flash here, but this group gets the job done, teams up well and could be the best offensive line Penn State will see on its nonconference schedule.

The Bulls on the defensive front are sort of like they are on the offensive side. Not much flash, but effective. End Malcolm Koonce was a consistent presence in the backfield against Robert Morris (a sack and two TFLs) and Taylor Riggins had five sacks last year as a freshman. The player that makes it work up front, though, is tackle Eddie Wilson, who commands double teams and won a starting job late last season as a true freshman. Backup end Ledarius Mack is the younger brother of former Bulls star and current NFL All-Pro Khalil Mack, and he had a sack in the opener.

James Patterson is the twin brother of running back Jaret Patterson, and he’s currently the leading career tackler for the Bulls, and his backup, Justin Mulbah, is a former high school teammate. Matt Otwinowski is the Bulls’ Campbell Trophy candidate who has a 3.89 GPA and donated his stem cells through the Be The Match program that helped save a stranger’s life. He’s an effective linebacker, too, having played in 39 career games. Kadofi Wright and Tim Terry Jr. split time.

Aapri Washington is undersized but a ballhawk and aggressive against bigger receivers. But the safeties are the story here. Joey Banks and Tyrone Hill are hard-hitting and play the run well, and redshirt freshman Cory Gross Jr. led the Bulls with seven tackles in the opener. Cornerback Devon Russel started his career at Eastern Michigan, and his backup, Ali Abbas, is a 220-pounder, likely the heaviest cornerback the Nittany Lions will see this season.

The Bulls appear solid in the kicking game. Punter Evan Finegan is a veteran who averaged a school-record 41.8 yards per punt last season, and first-year kicker Alex McNulty knocked down four PATs and a 40-yard field goal in the opener. Tito Overton is one of the kick returners, and he ripped off a 30-yard return against Robert Morris.