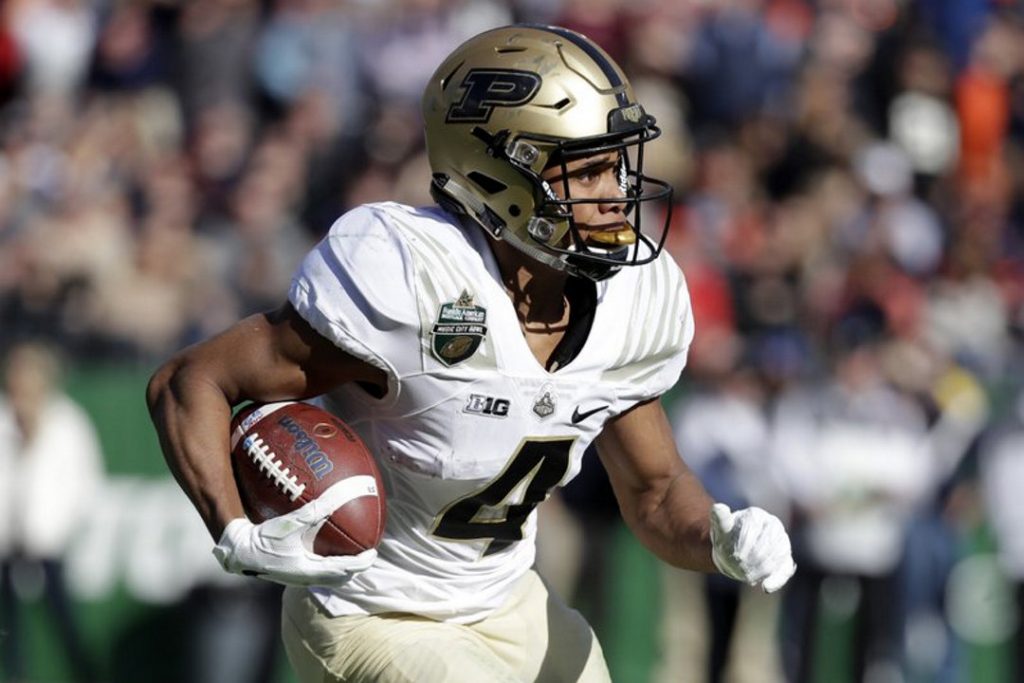 Scouting the opponent: The Purdue Boilermakers

Purdue receiver Rondale Moore will miss the Boilermakers’ game with Penn State on Saturday due to injury. He led the team in receiving and all-purpose yards through four games. ASSOCIATED PRESS PHOTO

Before each Saturday game, Penn State beat writer Donnie Collins will break down the Nittany Lions’ upcoming opponent, position by position. This week, it’s the Purdue Boilermakers, who are 1-3 overall and 0-1 in the Big Ten after losing 38-31 against Minnesota last week.

The Purdue offense likes to swing short passes, spread the ball around, get their receivers into space, then hit the occasional home run ball to keep the defense on its toes. But, let’s face it, this scheme worked because of Rondale Moore, who will miss the game with an injury. Moore had nearly twice as many catches (29) this season as Amad Anderson Jr., who is the Boilermakers’ second-leading receiver with 15. But even without him, this is still a group that can beat you. James Franklin compared David Bell – a true freshman his staff recruited hard out of Indianapolis last year – to Nittany Lions great Chris Godwin, and Bell is averaging 17.4 yards per catch this season. Tight end Brycen Hopkins, a Nashville prep star during Franklin’s time at Vanderbilt, can also stretch the field.

Of course, the receiving corps’ ability to break big plays goes hand-in-hand with the quarterback’s ability to get them the ball in space, and Purdue’s starting quarterback – Elijah Sindelar – will also miss the game with an injury. Jack Plummer is a big, strong-armed thrower who can stand in the pocket and survey the field. Despite a rocky outing in his first career start against TCU a week earlier, he looked solid in relief of Sindelar last week against Minnesota, completing 23 of 41 throws for 245 yards and two scores. He’ll need to protect the ball better against the Nittany Lions, though; he has thrown four interceptions in 70 attempts.

This is a solid group when it comes protecting its passers, who help out of course by getting rid of the ball quickly. The Boilermakers have allowed just six sacks in four games this season, and even Penn State’s quick defensive line will do well to get to Plummer a handful of times. LT Grant Hermanns and RG Matt McCann are all-conference candidates, but this group has struggled to open running lanes; at 68.3 yards per game, Purdue has statistically the worst running game among Power 5 programs and the second-worst in the nation in the FBS.

True freshman DE George Karlaftis has been a revelation for the Boilermakers. He leads the team in tackles for loss (5) and sacks (3) and he’s fourth in tackles while also somehow being a factor in their pass defense; he has defended two passes and intercepted another. This is a group that has generated a pass rush. Derrick Barnes and Anthony Watts both have two sacks, Higgins has one and the Boilermakers have been statistically decent against the run. But, two weeks ago, TCU did push this group around. The Horned Frogs gained 346 yards in their win on the ground.

Ben Holt is a grad transfer from Western Kentucky who is leading the Big Ten with 11 tackles per game, but this unit hasn’t looked great against the run overall or in pass coverage. Cornel Jones has a propensity for making plays in the backfield, but Jaylan Alexander hasn’t played much, with just one tackle on the season. How this group will defend the speed of the Penn State rushing attack while keeping an eye on tight end Pat Freiermuth is going to be a key for the Boilermakers, not to mention a challenge.

The Boilers have shuffled different sets of corners in pretty much from the start of the season, hoping to find a group that will be more effective than their No. 118 national ranking against the pass shows they have been. Coach Jeff Brohm’s depth chart indicates freshmen Cory Trice and Jordan Rucker are next in line. They’re both bigger players – Trice is 6-foot-3 – but Rucker doesn’t have so much as a tackle this season. Dedrick Mackey has statistically been the best corner for Purdue this season, but that’s because he has half of the Boilermakers two – count ’em, two – interceptions this season.

The kicking game could help Purdue win the field position battle if it can manage to otherwise keep the game close. J.D. Dellinger is one of the better kickoff men in the Big Ten, getting touchbacks on 19 of his 21 kickoffs. Brooks Cormier is also averaging 42.2 yards per punt, but 11 of his 17 boots have been returnable. The real question here is how the return game is affected by Moore’s absence, and nobody seems to know the answer. Anthrop has returned 19 punts in his career, but he averaged 1.5 yards per return and the coaching staff was happy to turn those duties over to Moore.