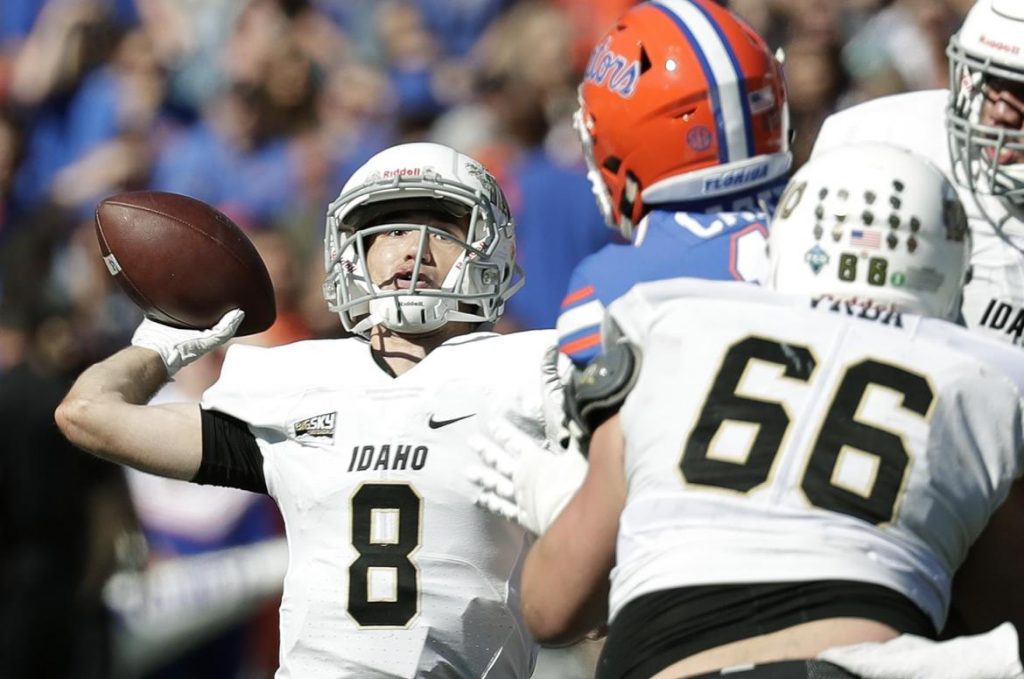 Scouting the opponent: The Idaho Vandals

A young overall group, but senior Jeff Cotton could put himself in line to be all-Big Sky Conference this season. He had 49 catches for 656 yards and seven touchdowns in 2018 with the Vandals, his first season in the program since transferring from Pima Community College in Arizona. Four of those seven touchdowns came early in the season, when Cotton became the first Vandals player since 2014 to haul in a scoring catch in each of the first four games.

This is a young group overall, but sophomore Cutrell Haywood does have a big game on his resume. He became just the 11th player in program history to have three receiving touchdowns in a game last Oct. 20 against Southern Utah.

Both of Idaho’s potential starting quarterbacks have the requisite experience, but they aren’t exactly similar players. Mason Petrino – the son of head coach Paul Petrino – is a more typical spread offense signal-caller; he runs well, moves in the pocket, completes a decent percentage of throws (60.9 percent for his career) and threw for 1,933 yards and 15 scores last season. Colton Richardson has a bigger arm and a bigger body – he’s listed at 285 pounds – and the coaching staff sure seems to like him: He started the season opener last season against Fresno State. But he completed as many passes to the Bulldogs (3) as he did to his own receivers and gave way to Petrino.

The Vandals running backs are extremely young and untested at the college level. Roshaun Johnson had 18 carries for 99 yards last season, but he’s more of a short-yardage back (none of his 18 carries have gone for negative yardage). Nick Romano and Kiahn Martinez were both all-state running backs in high school last season. Romano rushed for 32 touchdowns and led his high school – Rocky Mountain High, for all the John Denver fans – to the Class 5A state title in Idaho.

The Vandals are young up front, but guard Noah Johnson is one of the steadiest veteran offensive linemen in the nation and perhaps a professional prospect. He earned third-team All-America honors from HERO Sports last season, the first Vandals lineman to be so honored in a decade. Athlon Sports ranked him as a first-team All-American at the FCS level this summer.

The Vandals are massive in the middle. Nose tackle Rashaan Crawford played last season under 300 pounds, but he added more than 30 pounds of bulk in the offseason, and if he doesn’t start, 353-pound junior college transfer Jonah Kim will. Fellow tackle Noah Elliss hasn’t played in two years while getting his academics in order, but he’s a former four-star recruit who originally signed with Mississippi State whose father, Luther Elliss, is both his position coach with the Vandals and a former NFL All-Pro.

Another position where the Vandals have fortified themselves with junior college transfers, as both outside guys, Robert Miller and Jalan Jenkins, transferred in this year. Miller started his career at Memphis, and Jenkins had seven tackles in four games for FCS Indiana State in 2017. Tre Walker is the leader of the group, finishing with 41 tackles last season.

Cornerback Lloyd Hightower had one interception last season, which doesn’t seem all that impressive (and it isn’t). But, it was one of just three picks the Vandals had as a team last season. They’re hoping two more transfers – Davontae Ginwright from Western Michigan and juco Satchel Escalante (a frontrunner for the all-Penn State opponents Name Team after the season) – can help the secondary turn the ball over more often. The nickel defense is essentially the Vandals’ base defense, and Jalen Hoover is a useful player, a special teams maven who also had 54 tackles last season.