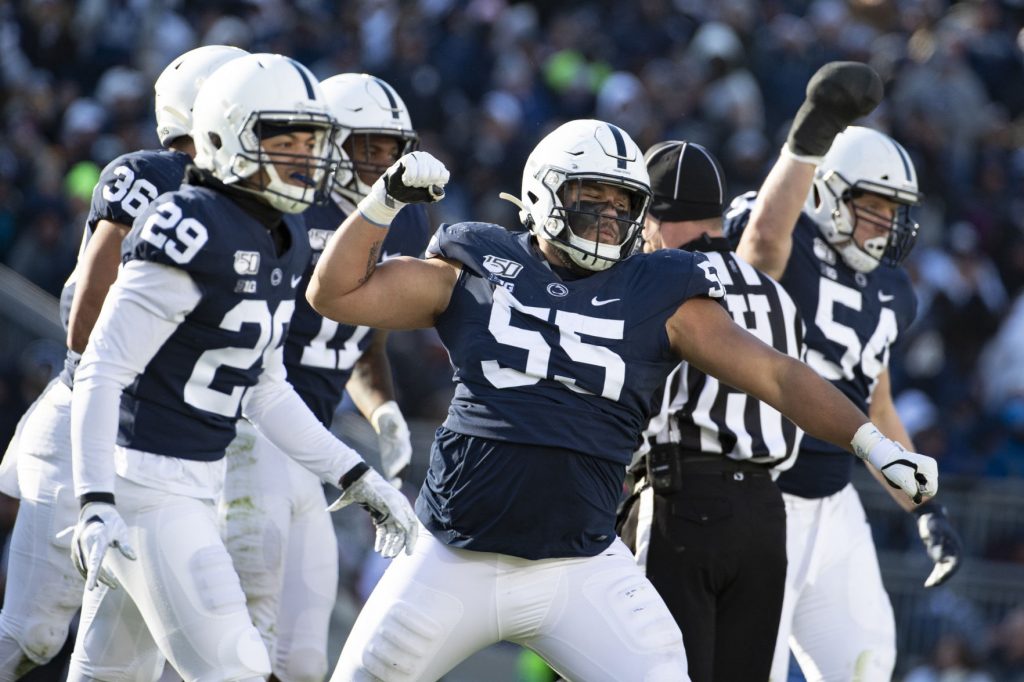 As Penn State kicks off spring football practice, there’s no better time than the usual time to take our first look of the year at Penn State’s full roster. Today, we take a deep dive into the defensive tackles.

Want a sneaky pick as a super-important player for the Nittany Lions this season?

PJ Mustpiher qualifies. His first season as a starter in 2020 led to honorable mention all-conference honors, piling up 35 tackles, a sack and two quarterback hurries in the nine-game campaign. 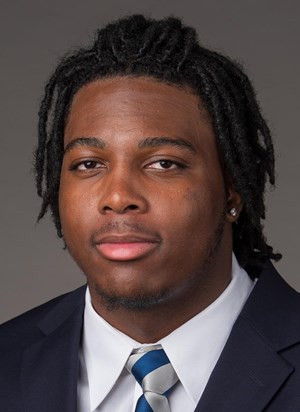 But he wasn’t a consistently disruptive force. Mustipher is a really good run stuffer who hasn’t been as dynamic making the passer uncomfortable as some of Penn State’s previous really good run stuffers — Austin Johnson, DaQuan Jones, Devon Still and Robert Windsor — were. He’s a sure-bet starter this season, even if he continues to be out of position a bit at the 3-technique, and Penn State will be looking for him to be able to provide a little more as a second-year starter.

Behind Mustipher, Penn State has a slew of intriguing options who came off the bench to provide some flashes of potential.

Hakeem Beamon is a smaller tackle, but he pretty consistently flashed the ability to get off blocks and make stops. In limited action, he had seven tackles, 1.5 for loss. That outproduced a very solid backup tackle, Fred Hansard, a more traditional run-stuffing type who had six stops.

Two younger players, Dvon Ellies and true freshman Amin Vanover, produced three tackles apiece when they got on the field, and Ellies even added a sack and a quarterback hurry. They’re exciting prospects for the 2021 rotation. 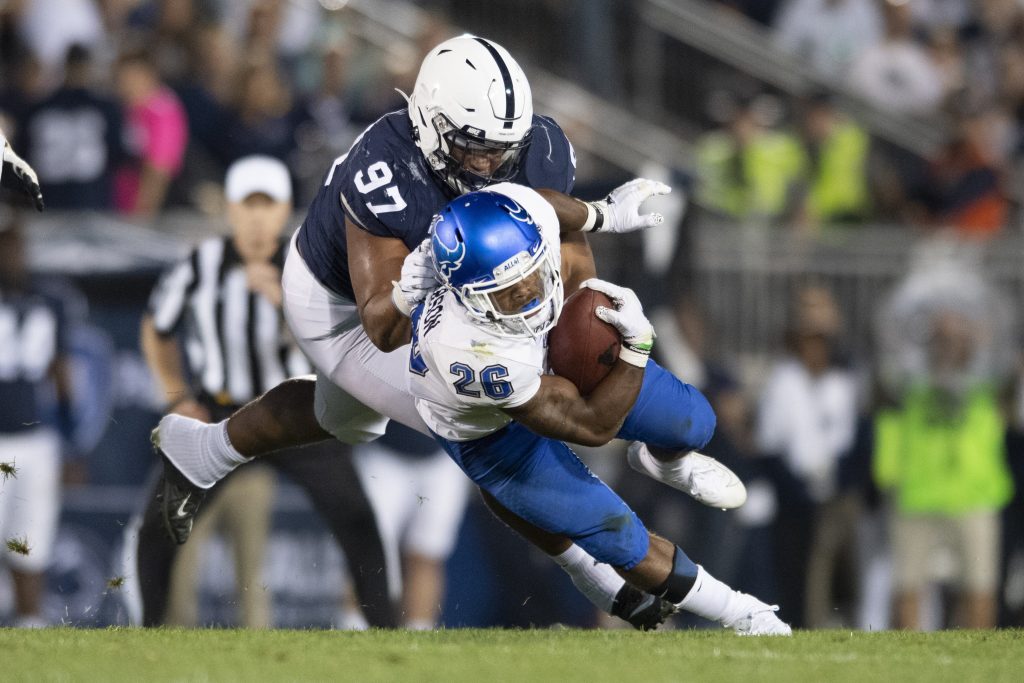 Penn State DT PJ Mustipher has been a handful against the run, but will be be able to improve as a pass rusher? BARRY REEGER / ASSOCIATED PRESS

Outside of quarterback, this is the position where depth was hit hardest by entrants into the transfer portal.

Antonio Shelton was a serviceable player for the last three years and a pretty good starter for the last two. He took 14 tackles with him to the University of Florida in January, and a good argument can be made that he was Penn State’s most disruptive defensive tackle down the stretch in 2020. He had 2.5 sacks and a forced fumble for the Nittany Lions in the final two games against Michigan State and Illinois, which were their most convincing wins. Plus, while he was not named a captain, he led like one. He’ll be missed among that group, for a few reasons.

The Lions also lost Judge Culpepper through the portal, and his was quietly one of the more interesting transfer cases in the nation over the offseason. He wound up going to the MAC, where he’ll likely have a better chance at an immediate starting spot with Toledo.

Penn State to Toledo is a big step down in competition and attention for Culpepper, who wasn’t a guy who didn’t play for the Nittany Lions. He was in every game, pretty firmly in the DT cycle. He had five tackles and half a quarterback sack. A pretty good rotation piece.

Now, we don’t know what the conversations with Culpepper were like behind the scenes, and maybe head coach James Franklin or defensive line coach John Scott Jr. told him he wasn’t in the plans for a starting spot, or maybe one suggested he look elsewhere, or maybe there just wasn’t a fit between program and kid or position coach and kid, or whatever. We don’t know. But on paper, Culpepper winning a starting job at Penn State this offseason didn’t seem outlandish when last season ended.

Taking a look at the depth the Lions have here, which is not half bad, maybe Culpepper saw the writing on the wall and took an easier opportunity to get a ton of reps elsewhere. But this is a transfer that will be worth watching, and perhaps will be a teaching opportunity for future portal use, one way or another.

Let’s start this conversation with another point that needs to be made here: Penn State got one of the better players who entered the transfer portal in the offseason. There were more than a few Power 5 programs that wanted to add Duke defensive tackle Derrick Tangelo, and rightfully so. 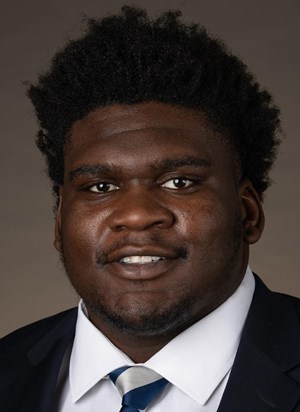 Tangelo didn’t come to Penn State to ride the pine, and as Shelton replacement — at 6-foot-2, 306 pounds, you can plug him into that starting role if you’re Scott and pretty much expect what you got last season, extrapolated out to 13 games. If you want to argue he’ll be more productive than Shelton was, that certainly can be done. He’s a good, solid player. A very similar-style player to Shelton, who was pretty similar to Mustipher.

All that said, there’s legitimate excitement around Beamon, who is something completely different, and there are some big things he can allow Scott to do up front if he continues to show progress this spring.

Foremost among those, he can push Mustipher over to a more natural position if he emerges as starting caliber. Mustipher is much more of a 1-technique kind of tackle, a guy who can play over the center, occupy blocks and let everyone else work one-on-one. In this scenario, that would include Beamon, a truer 3-technique tackle who could get his work one-on-one against a guard and make quarterbacks more consistently uncomfortable.

Penn State has some younger players who fit that three-technique profile, too. Ellies, for starters, always stood out as a possibility there, on his high school film — and last season, he showed some ability to get in the backfield, admittedly in very limited playing time. Same with Amin Vanover and Coziah Izzard.

Gut feeling: Beamon will have to have a monster spring and show the staff that he can build off of last season to grab the starting role. Penn State fans can dream on what it would have been like had either Mustipher or Shelton been more of a force rushing the passer. But, the Nittany Lions were fourth in the Big Ten defending the run. Those two being on the field were a big part of that, and nothing Tangelo brings to the table makes you think they’ll be worse than allowing 3.7 yards per carry this season.

They can mix Beamon and the others in more on pass downs and pretty much play the way they did last season, when the defense’s biggest issues were more inconsistent linebacker play and the constant uphill fight against poor field position than anything else.

But, Beamon is one of this springs legitimate X-factors, a guy who can make the coaching staff rethink a lot of strategies. 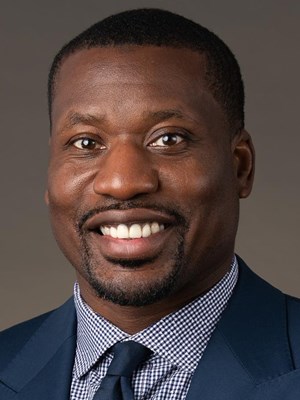 Some of the younger players need to step up this spring.

Penn State had a perfect storm of unfortunate evens last spring. First, longtime defensive line coach Sean Spencer left the program in late January, and Scott didn’t get the job until Feb. 8. That’s pretty late in the process anyway. Then, the coronavirus stopped spring practice before it ever started.

By the time Scott really had a chance to evaluate what he had, the Nittany Lions were preparing to play games. The whole situation made evaluation and development quite tricky, and Scott wasn’t the only new position coach in that predicament.

This spring provides Scott with his first legitimate opportunity to try different things with certain players, and figure out strengths and weaknesses and possibilities with his eyes, and not on film or even Zoom.

Franklin said something interesting in his first press conference of the spring earlier this week. He wants to develop a “two-and-a-half deep” depth chart at every position in the spring, and at defensive tackle, that means finding five or six he’d be comfortable with putting on the field, in a game, and be able to win.

You know Mustipher, Tangelo and Beamon are in that group. The good thing about this position is, unlike some others on the roster, it’s not a matter of if they can round that out talent-wise, but with whom they can do it.

Penn State wants to do what every team wants to do defensively: Stop the run, and get in the backfield consistently with the four players they have along the line of scrimmage.

The Lions have done the former pretty consistently, but the latter wasn’t evident last season.

Making plays in the backfield wasn’t easy for the Nittany Lions last season, and the defensive tackles were a big reason why.

It’s clear, Penn State’s defensive tackles didn’t make as many splash plays during the last two seasons as they did at any point previously during the Franklin era. And it was a stark dropoff.