Editor’s note: In the weeks leading up to the 93rd Academy Awards ceremony on Sunday, April 25, Time Warp will feature stories related to films nominated this year and other local connections to the annual film event.

May 18, 1950: Scranton native and award-winning songwriter Ned Washington came back to his hometown to present his latest work.
At the Strand Theater, Washington introduced the latest film to which he contributed, “My Foolish Heart,” which featured a song of the same name with lyrics by Washington and music by Victor Young. Based on a J.D. Salinger short story, “Uncle Wiggily in Connecticut,” the film starred Susan Hayward and Dana Andrews. It premiered in Los Angeles on Dec. 25, 1949, and had just made it to Scranton several months later.
Before the evening premiere at the Strand, Scranton Mayor James Hanlon presented Washington with the key to the city in a short ceremony at City Hall. Next, Washington, a former Scranton Republican and Scranton Times newsboy, visited the Times newsroom and performed on the “Open House Show” on the Times’ radio station, WQAN. 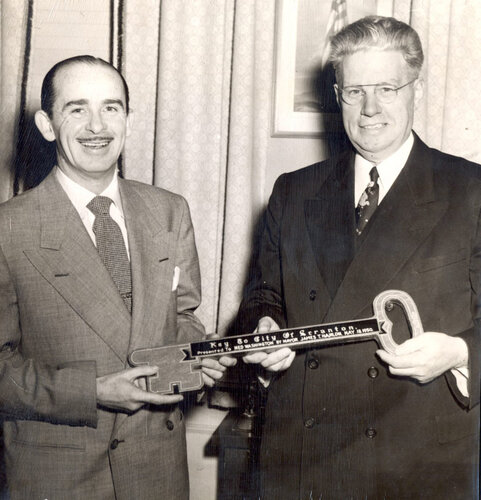 Scranton native Ned Washington, on left, receives the key to the city of Scranton from Mayor James Hanlon on May 18, 1950. TIMES-TRIBUNE ARCHIVES

At the premiere, Washington told the crowd of 1,700, “No matter where you go, how far away, or what you do, there’s always something that pulls your heart back to the place where you were born.”
Washington and Young’s song became a hit and earned them a nomination for best song at the Academy Awards (they lost to Frank Loesser’s “Baby It’s Cold Outside”). But by that time, Washington was pro on the awards scene.
At the Academy Awards for 1940, Washington, along with Leigh Harline and Paul J. Smith, won the Oscar for best score for Walt Disney’s “Pinocchio,” and Washington and Harline won the award for best song for “When You Wish Upon a Star,” which went on to become a Disney legend. Washington and Harline also wrote the lyrics for other songs in Pinocchio, such as “Give a Little Whistle” and “I’ve Got No Strings.”
The following year, Washington was nominated for best song for “Baby Mine,” part of another Disney classic, “Dumbo.” He lost to Jerome Kern and Oscar Hammerstein II for “The Last Time I Saw Paris” from the film “Lady Be Good.” 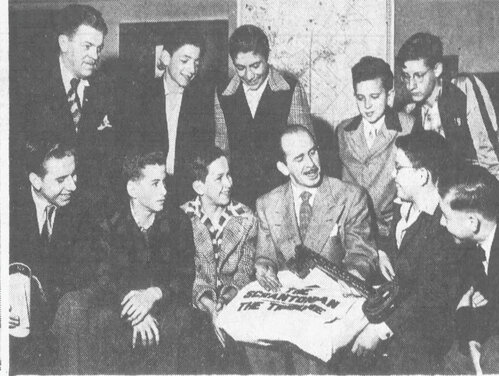 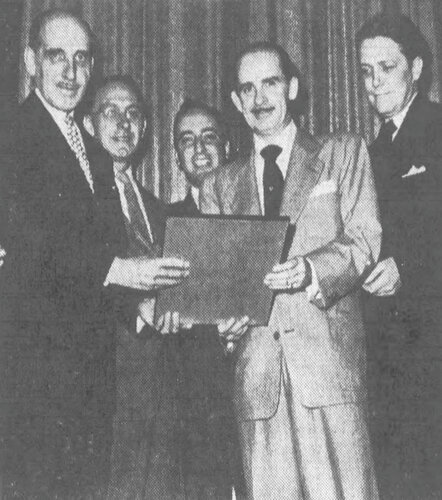 A few years later, Washington was nominated for the song “Saludos Amigos” from the Disney animated short of the same name, and then for “Rio De Janeiro” from the film “Brazil.” In 1952, he picked up his third Academy Award for best song for “High Noon (Do Not Forsake Me, Oh My Darlin’)” from the film “High Noon.” He shared the award with Dimitri Tiomkin.
Washington collected several other Oscar nominations for best original song through the years, for “Sadie Thompson’s Song (Blue Pacific Blues)” from “Miss Sadie Thompson” (1953), the title song from “The High and the Mighty” (1954), “Wild Is the Wind” from the film of the same name (1957), “Strange Are the Ways of Love” from “The Young Land” (1959) and “Town Without Pity” from the film of the same name (1961).
Before working in Hollywood, Washington also wrote songs for three Broadway musicals, “Earl Carroll’s Vanities,” “Murder at the Vanities” and “Blackbirds of 1933.”
According to the American Society of Composers, Authors and Publishers database, Washington has more than 500 songwriting credits. He served as its director from 1957 to 1976 and vice president from 1964 to 1976.
Washington died on Dec. 20, 1976, at 75. He was survived by his wife, Patricia; a daughter, Catherine Hinen; two granddaughters and two sisters.

A trio of Ned Washington’s hits –