Editor’s note: In the weeks leading up to the 93rd Academy Awards ceremony on Sunday, April 25, Time Warp will feature stories related to films nominated this year and other local connections to the annual film event.

1906: In the Academy Award-nominated film “Mank,” writer, activist and 1934 California gubernatorial candidate Upton Sinclair has a minor but important part that deals with the writing of the screenplay for “Citizen Kane.” Bill Nye – yes, Bill Nye the Science Guy – plays Sinclair opposite Charles Dance as newspaper magnate William Randolph Hearst, Arliss Howard as Louis B. Mayer and Ferdinand Kingsley as Irving Thalberg.
Sinclair was well-known by then, having entered the spotlight in 1906 with his book, “The Jungle.” Sinclair worked in the meatpacking industry in Chicago to get background for this work of fiction, which was first serialized in the socialist newspaper “Appeal to Reason” and later published in book form by Doublebay. 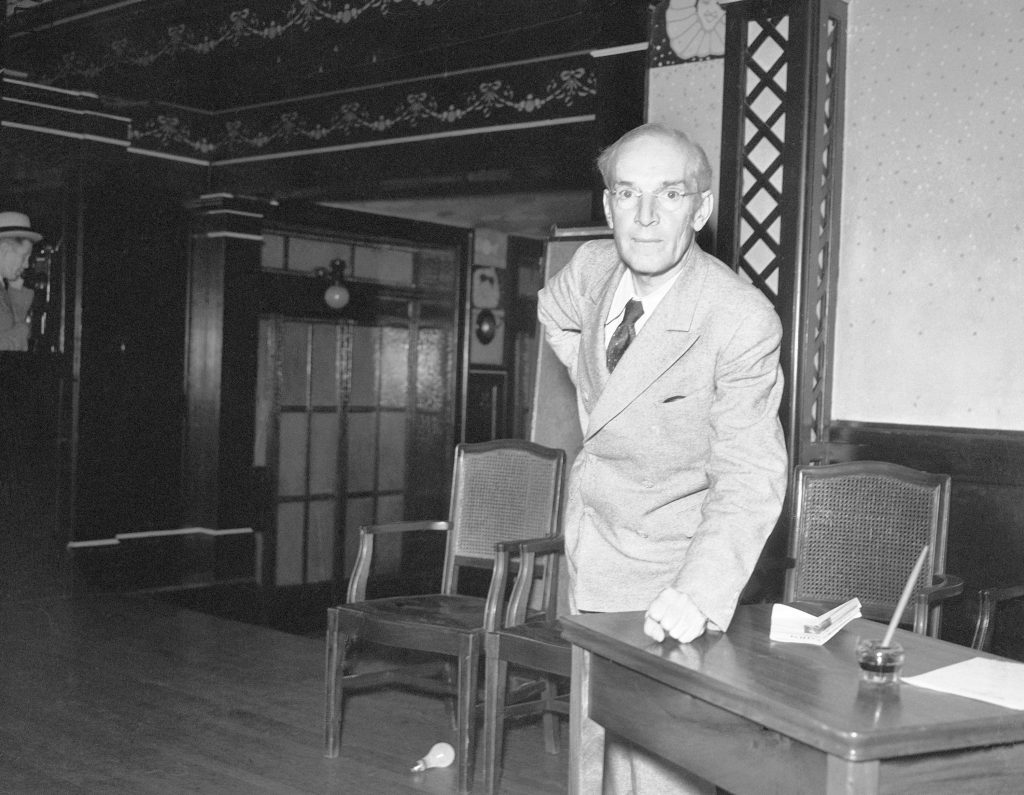 The book focuses on a Lithuanian immigrant, Jurgis Rudkus, who works in a meatpacking plant. The reader goes on a journey through the unsafe, unethical and unsanitary conditions that the mostly immigrant workforce faced in the Windy City’s plants. It also touches on the workers’ lives outside the factory and what is was like to be the working poor.
When the book hit the streets in February 1906, it created as a stir. On March 17, a short article in the Scranton Republican traced the early career of Sinclair up to his work on “The Jungle.” The newspaper reporter called the novel “the most daring and remarkable book that has been published in this country.”
A month later, in the Literary Notes section of the Scranton Republican, a report noted that the book saw “wide sales” and that newsdealers constantly were requesting more copies.
“It may be called a blazing indictment of conditions as they exist there, yet if all is true that Sinclair in his novel says, the government should not lose a minute to step in and right some of the terrible wrongs that are being perpetrated there,” the reporter said of the book.
The federal government did step in. 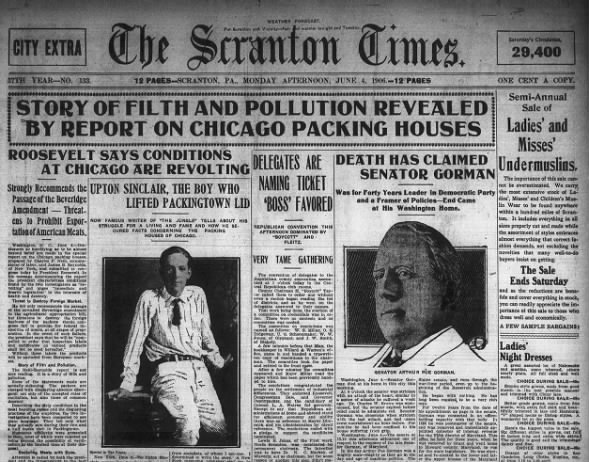 In the June 4, 1906, edition of the Scranton Times, an article dealt with an investigation of the meatpacking industry ordered by President Theodore Roosevelt. The president described what his investigators, Labor Commissioner Charles Neill and social worker James Reynolds, uncovered as revolting.
Roosevelt called for “immediate and drastic legislation in the interests of health and decency.” By the end of the month, Congress had passed the Meat Inspection Act and the Pure Food and Drug Act.

Sinclair continued writing, trying to affect change with his prose. He took on the newspaper industry (“The Brass Check”), coal mining (“King Coal”), oil drilling (“Oil!”) and the automobile industry (“The Flivver King”).
Sinclair entered politics in 1920, first running for a seat in the U.S. House of Representatives; the U.S. Senate in 1922; and three times for governor of California, in 1926, 1930 and 1934. 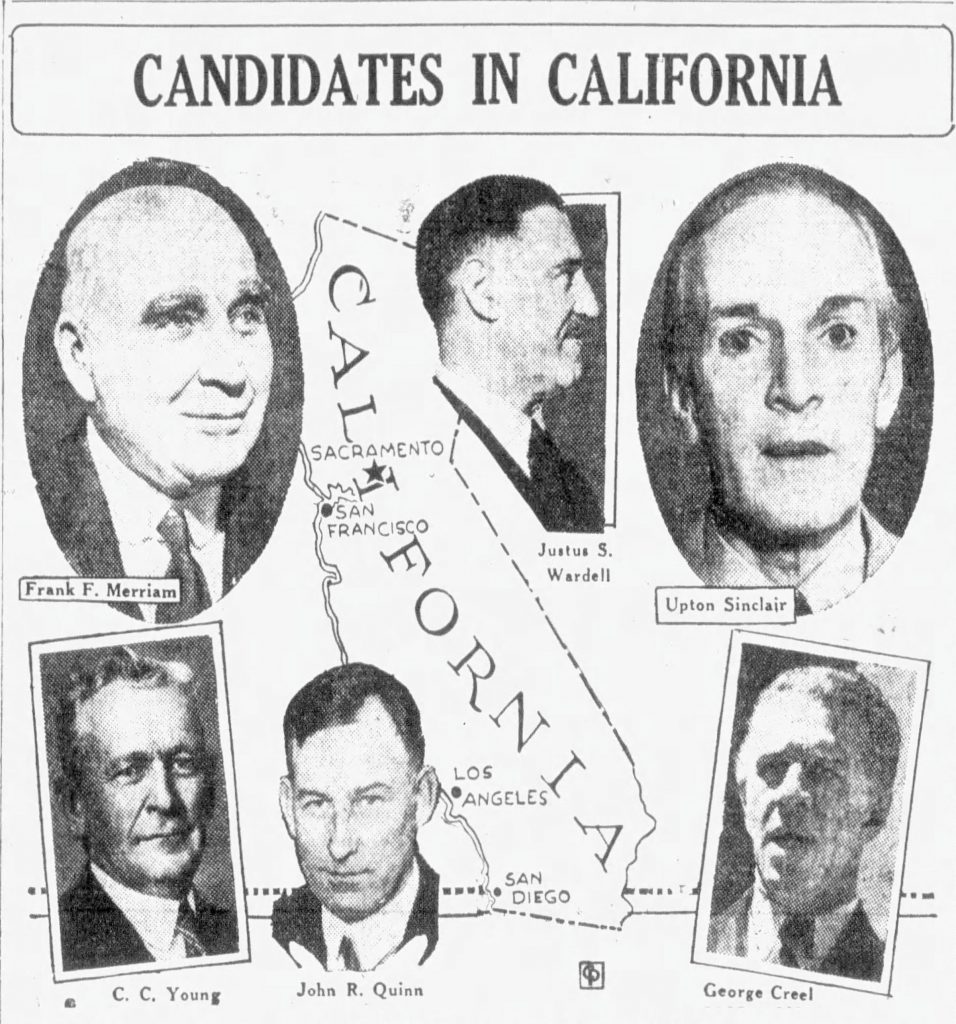 Photo illustration and map from the Aug. 25, 1934 edition of the Scranton Times dealing with the candidates running for governor in California. Republicans candidates were Gov. Frank Merriam, former governor C.C. Young, and John R. Quinn. The democratic candidates were author Upton Sinclair, writer George Creel and Justus S. Wardell.Sinclair and Merriam would capture their party’s nominations on Aug. 28, 1934. Submitted Material

In his 1934 gubernatorial run, depicted in the film “Mank,” he received no support from newspapers in California. Hearst, a major character in “Mank,” owned newspapers in Los Angeles, Oakland and San Francisco, according to a newspaper guide from the University of Illinois Library.
The Hollywood studios were not fans of Sinclair, either. His run fell victim to the “first big ‘hit campaign’ of modern politics, spearheaded in no small part by the Hollywood studios, and in particular, MGM, Irving Thalberg, and studio head Louis B. Mayer,” according to a 2016 KCET.com article. MGM even produced fake newsreels called “California Election News” with the intent to move voters’ opinions away from Sinclair.
Sinclair ran on a platform of ending poverty in California. He suggested having unemployed people use empty factories to make goods for their own use, giving the unemployed land so they could grow produce, providing pensions for blind and disabled people, getting rid of California’s sales tax and adding a graduated state income tax.
In the end, Sinclair lost to incumbent Republican Gov. Frank Merriam in the general election, but he continued writing. He won the Pultizer Prize for Fiction in 1943 for his work “Dragon Teeth,” which deals with the rise of Nazi Germany in the 1930s.
Sinclair died at 90 at a nursing home in Bound Brook, New Jersey. His obituary in the Scranton Times on Nov. 26, 1968, called him the “king of the muckrakers.”