Herman and Joseph Mankiewicz called Wilkes-Barre home for part of their youth before becoming Hollywood legends.
The Mankiewiczes only spent a few years in the city while their father, Franz, worked as a teacher at the Harry Hillman Academy (later the Wilkes-Barre Day School, which eventually merged with Wyoming Seminary in 1952) and as editor/manager of the Wilkes-Barre German newspaper, Demokratischer Waechter. The family later moved back to New York City when Franz took a teaching position at City College of New York.
Herman Mankiewicz had been born in New York City on Nov. 7, 1897, according to his March 6, 1953, obituary in the Wilkes-Barre Record. He attended Hillman Academy and in the summer worked as a surveyor in the Wilkes-Barre area.
After graduating from Columbia University, Mankiewicz joined the reporting staff at the New York Tribune and later headed up the news service for the American Red Cross during World War I. He stayed in journalism, becoming the Berlin correspondent for the Chicago Tribune and critic for the New York Times and the New Yorker magazine. He had a seat at the legendary Algonquin Round Table.
Mankiewicz transitioned to writing for the silver screen in the mid 1920s, with his first film, “Road to Mandalay,” starring Lon Chaney. He continued working on scripts in various roles and helped polish or fix screenplays from others that needed help. 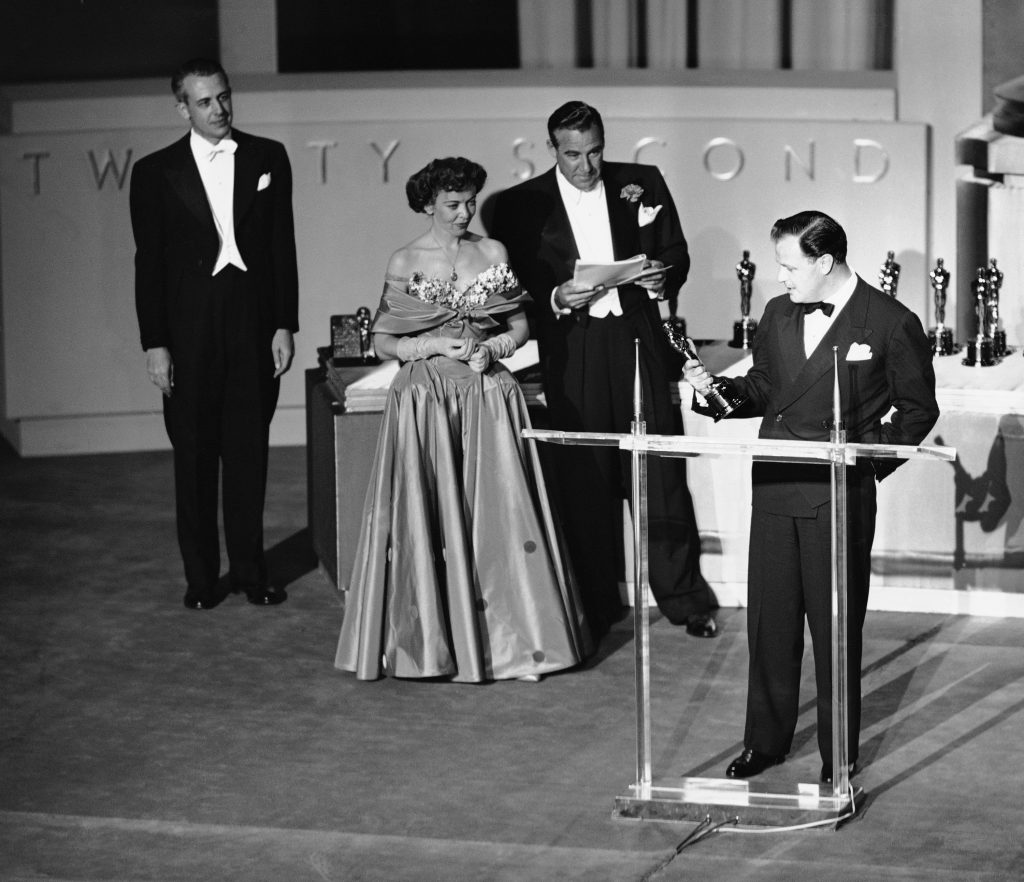 Joseph Mankiewicz admires the gold Oscar presented to him in Hollywood, Los Angeles on March 23, 1950 at the academy awards presentations as best director for the movie “A Letter Three Wives.” At left are Ida Lupino, who made the award to Mankiewicz, and Paul Douglas, master of ceremonies. (AP Photo)

In 1940, Mankiewicz began working with Orson Wells on the film “Citizen Kane.” The relationship and the fight over authorship of the screenplay is the basis for the new Netflix film, “Mank,” starring Gary Oldman as Mankiewicz and Tom Burke as Wells. The two ended up sharing the Academy Award for best original screenplay for the iconic film.
From there, Mankiewicz wrote the screenplays for the “The Pride of the Yankees,” “The Spanish Main” and “The Pride of St. Louis.” With Jo Sterling, he earned an Academy Award nomination for best adapted screenplay for “The Pride of Yankees.”
Mankiewicz died March 6, 1953, from “heart trouble complicated by uremic poisoning,” according to the Los Angeles Times. He was survived by his wife; two sons, Frank and Don; daughter, Johanana; brother, Joseph; and sister, Erna Steinbulk.
In an L.A. Times book review from Oct. 9, 1978, for the book “Mank: The Wit, World and Life of Herman Mankiewicz” by Richard Meryman, the reviewer offered these words by Orson Wells to describe the late screenwriter: “Mankiewicz was some sort of tremendous performer in a Hieronymus Bosch landscape of his own. There was always the feeling that you were in the presence of thwarted violence. It was the thrashing of some creature, some beached creature. Some magnificent creature. You didn’t know what it was because you had never seen one of those before. None of us ever had. It was Mank.”
Joseph Mankiewicz, meanwhile, was born in Wilkes-Barre in February 1909. After moving to New York City with his family, Mankiewicz graduated from high school by 15 and from Columbia by 19, according to his Feb. 6, 1993, New York Times obituary. 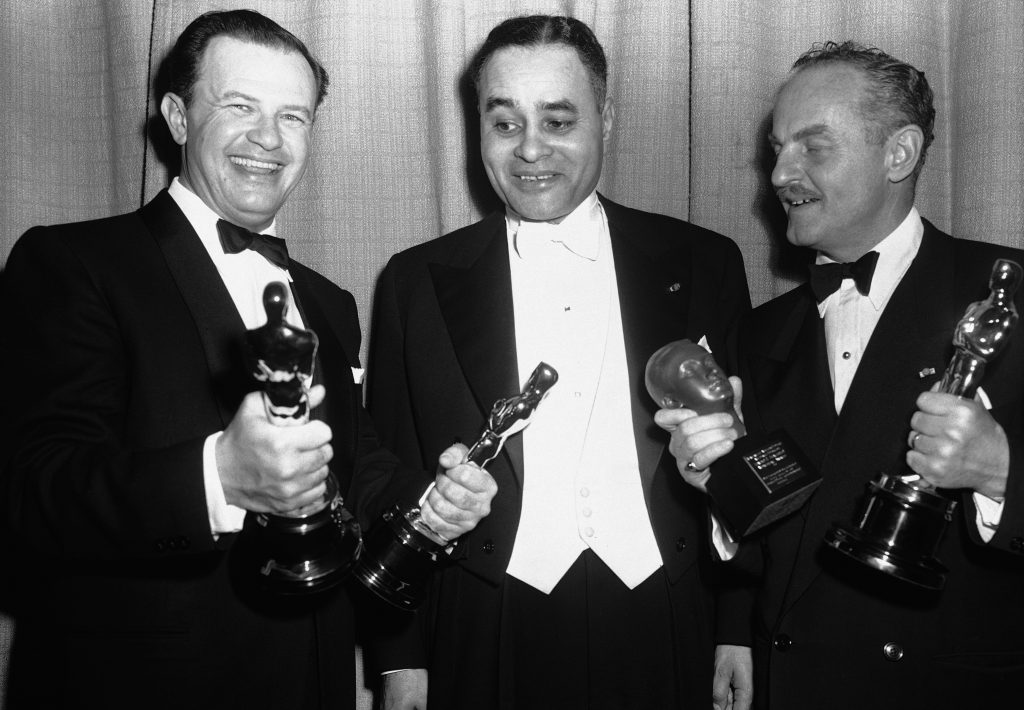 Joseph L. Mankiewicz (left) and Darryl Zanuck, stand with Dr. Ralph Bunche (center), after winning two awards at Hollywood, Los Angeles on March 29, 1951. Mankiewicz won honors for best direction and best screenplay for his work on “All About Eve.” Zanuck was the producer of the film and also won the Irving Thalberg memorial award for outstanding movie achievement. Dr. Bunche, United Nations mediator, made the presentations on behalf of the Motion Picture Academy of Arts and Sciences. (AP Photo)

Similar to his elder brother, Mankiewicz worked as a writer for the Chicago Tribune and later in Berlin as a translator for the intertitles for silent films. Herman Mankiewicz later encouraged his brother to come to Hollywood, where he got the young man a job as an apprentice writer in 1930, according to a Wilkes-Barre Record article from February 1967.
Joseph Mankiewicz wasted no time in establishing himself in the film industry. In 1931, he received an Academy Award nomination for best adapted screenplay for the film “Skippy.” While he was hired as scriptwriter and later as a producer for Metro-Goldwyn-Mayer, Mankiewicz wanted to direct and finally got his chance with the 1942 film “Woman of the Year,” for which he also penned the screenplay.
In the early 1950s, Mankiewicz scored a series of hits and awards for several films: 1950’s “A Letter to Three Wives,” 1951’s “All About Eve” and “No Way Out,” and 1952’s “Five Fingers.”
Around this time, he also decided to move his family back east to Bedford, New York. Mankiewicz continued writing and directing such films as the 1955 adaptation of the Broadway musical “Guys and Dolls,” starring Frank Sinatra and Marlon Brando, and the 1963 epic “Cleopatra,” with Elizabeth Taylor, Richard Burton and Rex Harrison.
Joseph Mankiewicz died Feb. 5, 1993, at 83. He was survived by his third wife, Rosemary Matthews; a daughter, Alexandra; and three sons, Christopher, Thomas and Eric. He had previously married Rosa Stradner and Elizabeth Young.

Trailer for the Netflix Film – ‘Mank’