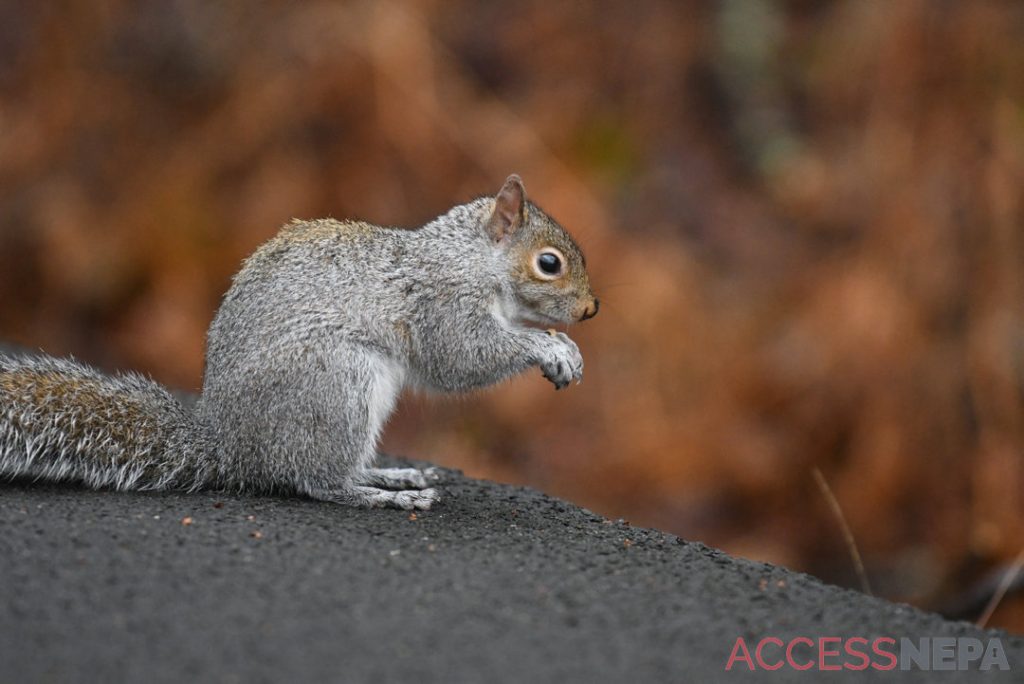 Woolly bear caterpillars – the most famous of winter forecasters in the wild – appear confused about what the coming season will bring. Another long-range prognosticator – paper wasps – seem to also be struggling to come up with a unified prediction.

This is a story about the folklore of wildlife as predictors of the approaching winter months.

If you’re looking for a more scientific long-range forecast you will want to seek out some other source like the National Oceanic and Atmospheric Administration’s Climate Prediction Center, which foresees a winter of fewer and milder snowstorms this year.

But if you enjoy dabbling into the mythic and mystical, here is the wildlife winter forecast. I did survey people across Pennsylvania on social media for their observations on what the wild things are telling us, but that just increases the anecdotal evidence we have to work with rather than bringing any scientific methodology to the process.

With those qualifiers in mind, here’s the winter outlook from the wildlife of Pennsylvania.

As I’ve already hinted, the woolly bears and the wasps are sending mixed signals this year.

But this fall Pennsylvanians seem to be spotting nearly equal numbers of mostly orange and mostly black woolly bears.

In reality, the size of the orange band on the woolly bear expands as the caterpillar ages. The more orange you see, the longer that caterpillar has been crawling about, eating and growing.
The folklore on the wasps suggests that the higher aboveground the paper wasps build their nest, the deeper will be the snows of winter.

Reports from across Pennsylvania tell of wasp nests ranging from 3 to 40 feet off the ground, offering little in the way of clear guidance.

From a purely natural history note: The queen wasp selects a sheltered spot, protected from wind and rain, when she is ready to launch her colony. And, by the time the first snows arrive, nearly all the nests are empty of wasps. All but the new queens have died off and the queens are tucked into crevices in log and tree trunks to hibernate until next spring.

Squirrels, however, are providing concrete guidance on the approaching winter: It will be long and hard.

In folklore, the more frantically that squirrels gather nuts and the higher in trees they build their nests, the harder and longer will be the winter.

Observers across Pennsylvania have noticed that their local squirrels are very busy and they’ve placed their leafy nests mostly high in the trees.

(The facts: A full-grown gray squirrel eats about a pound of food per day, and not all of that is nuts. Squirrels are omnivores, eating nuts, seeds, fruits, fungi, eggs, insects, and small animals and birds. It is driven by instinct to hide as many nuts as possible from late summer through fall. And squirrels tend to use cavities in trees, rather than the nests they build, to escape the harshest conditions of winter.)

Squirrels and other game species seem to be telling the hunters that harvested them to expect severe weather this winter.

The folklore: If deer, squirrels, raccoons, opossums and other mammals put on a heavy layer of fat in the fall, a severe winter is approaching.

The facts: The bodies of mammals in temperate climates, with changing seasons, are programmed to add fat during periods of abundant food. The amount of fat an animal can produce is dependent on how much food it finds through the fall.

Folklore also says that the heavier fur grows on mammals in the fall in preparation for winter, the more severe winter conditions will be.

Animals seem to be sporting extremely healthy coats this fall.

The facts: Growing a heavy winter coat is a process controlled by hormones, which are triggered by decreasing length of daylight period. An animal produces a similar amount of fur and hair each year.

Have you been seeing a lot mice invading your home this fall, as many people have reported? Folklore tells us that the more mice that invade a home, the colder and longer will be winter.

The facts: An adult female house mouse produces 5-8 litters of 5-7 babies in a year. The number of mice near a house when colder temperatures of fall trigger the search for warmer shelter provides the best forecast of the number of mice that will attempt to move into the house.

Mole tunnels are another predictor of winter, according to folklore. The deeper the mole digs its tunnel, the harder will be the winter. More than 2.5 feet deep, the weather will be severe. Less than 2 feet deep, expect a mild winter.

The few mole tunnels I’ve come across this summer and fall have been relatively close to the surface, which might be expected because I haven’t been digging in search of the holes.

The facts: Apart from their nesting chambers, moles tend to dig most of their tunnels at depths where they find food, notably earthworms.

With human-sized spider webs being reported this year, it might be important to consider the folkloric warning that larger than normal spider webs in the fall foreshadow a severe winter.

The facts: While different species of spiders, and individual spiders, have their own web design and construction, all spiders tend to try to maximize the amount of prey captured with the least energy expended on web-building.

Early migration by geese, and other birds from the north, indicates the early approach of winter, according to another bit of folklore.

There have been numerous reports of early migration, and the 22nd annual Winter Finch Forecast from the Ontario Field Ornithologists projects a strong irruption of northern birds to the south this year. 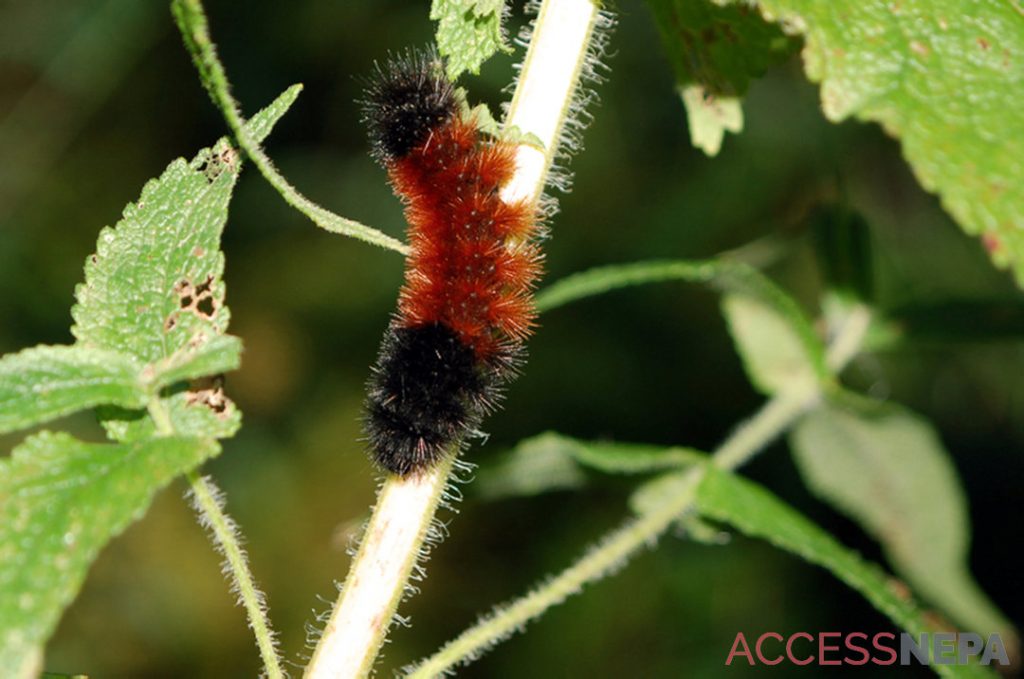 ACCESS NEPA FILE
Another creature with its own weather predicting capabilities is the wooly bear caterpillar, also known as the wooly worm, the larval form of the Isabella tiger moth. Folklore says that the thinner the rusty brown section of the caterpillar, the harsher the winter.

The facts: Length of daylight period is the primary driver of migration, although food availability can push birds into landscape-scale movements.

Folklore warns that when multiple woodpeckers repeatedly share the same holes in the same trees, they are preparing for a cold winter with plenty of ice and snow.

Observers have reported good numbers of woodpeckers in action this fall, and many do seem to be visiting and working at the same holes again and again.

The facts: Woodpeckers normally visit many holes on many trees in their search for fat insect larvae.

In much of Pennsylvania drought conditions are prevailing from summer into fall, and that could mess with the bit of folklore about muskrats digging the holes to their burrows higher on the bank of the stream or river when they expect a winter with a lot of buildup of ice on and along the water. With low water conditions, the muskrats haven’t seen the need to travel very far up the banks to begin their digging.

The facts: The most important holes to muskrats are those at and below the water surface, which provide protected access to the burrow for the aquatic rodents.

Overall, while animal reactions to shorter-term conditions may hold some reliability as short-term forecasts, evidence supporting longer-term forecasts, such as for the upcoming winter, beyond anecdotal evidence has not been forthcoming.

All the bits of wildlife evidence noted here reveal much more about conditions when the animal put on the fat, grew to a certain size or began building the nest than about weather conditions months away at the time.