Stargazing: Loads of summer still in the heavens

Despite the fact that September is almost upon us, there’s plenty of summer constellations playing on stage in our Pottsville nightly celestial theater. Also, since sunsets are earlier your stargazing time is expanding! Even when autumn officially begins on Sept. 22, the nocturnal summer splendor continues!

The great Jupiter-Saturn show continues. They’re the brightest star-like objects in southeast evening sky and can’t wait to be viewed through telescopes. Jupiter is the brightest of the two planets. The next brightest “star” a little to the right of Jupiter is lovely Saturn. Even if you have a smaller telescope, you can have a lot of fun with both planets.

It’s best to take long continuous views of 10 to 15 minutes. You’re bound to see more detail. On Jupiter, you should easily resolve the disk of the 88,000-mile-diameter planet, even see some of its cloud bands. You’ll easily see up to four of Jupiter’s brightest moons that appear as tiny “stars” on either side of Jupiter. As they orbit Jupiter they continuously change their arrangement from night to night. Some nights, one or more may be hiding behind the giant planet or camouflaged in front of it.

Saturn is an absolute gem to see with a telescope! Without any trouble, you should be able to make out Saturn’s enormous ring system, made up of billions and billions of bits of ice. You’ll also spot Saturn’s largest moon, Titan, and maybe some of its dimmer moons, too. If you want to get a young person excited about amateur astronomy, have them look at Saturn through a telescope. They’ll be hooked! 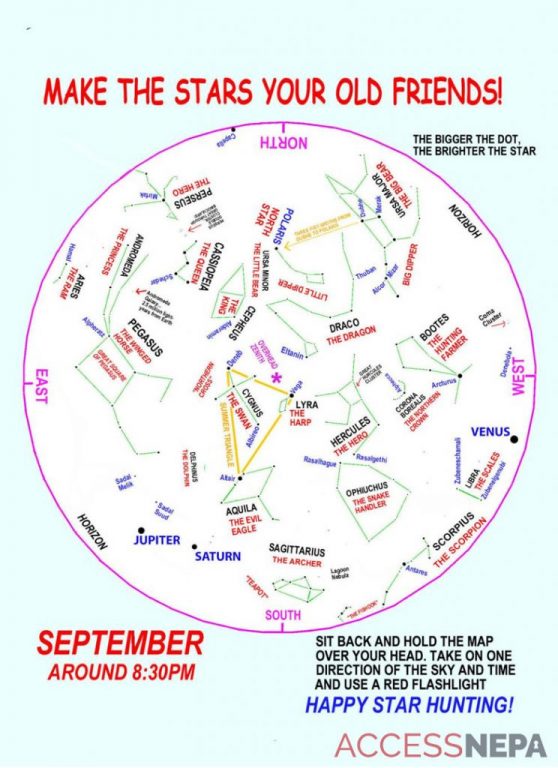 Venus is actually the brightest planet in the early evening sky, but it’s not out for long. It pops out in the very low western sky in the evening twilight and sets less than an hour or so afterward. To be candid, I find that looking at Venus through a telescope is not all that exciting because of its complete and poisonous cloud cover. This month, for extra credit, see if you can spot Mercury in the first half of September, extremely close to the western horizon.

Summer constellations still dominate much of the sky. The summer triangle is nearly overhead in the early evening. It’s made up of the three brightest stars you can see near the zenith. It’s a great tool to help you navigate that part of the sky because the three stars — Vega, Altair and Deneb — are all the brightest stars in their respective constellations, Lyra the Harp, Aquila the Eagle and Cygnus the Swan, otherwise known as the Northern Cross. From those three constellations, you can branch out with your eyes to find other surroundings, fainter constellations.

In the low south-southwest sky, not far from Jupiter and Saturn, are the classic constellations Scorpius the Scorpion and Sagittarius the Archer. Scorpius actually looks like a scorpion. Sagittarius is also known as the “Little Teapot” because that’s what it really resembles.

The Big Dipper is hanging by its handle in the northwest sky, outlining the derrière and tail of the constellation Ursa Major, the Great Bear. The fainter Little Dipper, also known as Ursa Minor, is standing on its handle, and at the end of the handle is Polaris, a moderately bright star also known as the North Star. Not far away in the northeast, look just below the bright W that outlines Cassiopeia the Queen, tied up in her throne!