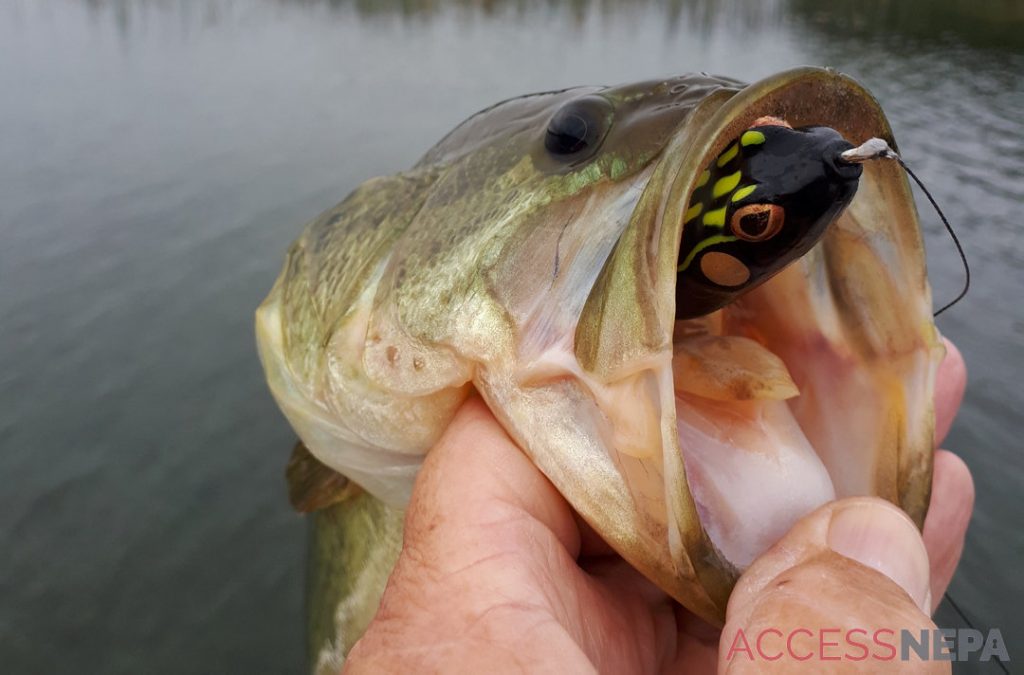 There are certain outdoors experiences anglers seem to remember forever.

A rack buck emerges out of a wooded thicket five minutes after legal hunting time on the opening day, a vocal spring gobbler comes into range offering a fanned-out display and a largemouth bass explodes from under a lily pad after a top-water frog lure that has been methodically brought across the edge of some vegetation back toward the shoreline.

Summertime bass fishing can make for some really exciting experiences, and frog lures often are just the ticket. It is all about the angler’s ability to emulate a frog’s actions from the perspective of appearance, movement and habitat.

There is no question that frogs are an abundant amphibian in local lakes and ponds — being found along shorelines near where vegetation is growing out past the water’s edge — by listening to their ample communication as their mellow sounds reflect off of the water’s surface. They are there, and they are also often a favorite food of bass. Understanding more about their presence in fishing spots can lead to some really exciting angling experiences.

Understanding more about how frogs exist in their aquatic environments can lead to a higher level of success for the bass angler utilizing the frog lure.

“Most local ponds and lakes will be home to a number of different types of frogs including the bullfrog, the green frog and the leopard frog, which can all be of varying sizes,” said Pennsylvania Fish and Boat Commission biologist Aaron Frey. “Frogs, which are amphibians, spend a lot of their time on the edge areas between water and land and prefer vegetation areas just into the water where they can feed on insects and stay cool in the water and go back and forth between small structures and vegetation such as lily pads.

“Frogs don’t drink like most other animals do, they absorb water through their permeable skin, and that is an important reason why they spend a lot of their time in ponds and lakes and moist areas. Frogs are excellent short-distance swimmers and often times will go between the shore and a structure in the water such as a lily pad or duck weed or a downed tree branch.

“They don’t often stray too far from these areas because they look to them for safety. Frogs have a lot of predators, and with their eyes located toward the top of their head, they seem to be more aware of dangers from out and above and not so much from down and below.”

“Bass spend a lot of their time in the summer months near the edges of vegetation and also near openings in the vegetation where significant growths of lily pads and duck weed are known to be,” PFBC Northeast and Southeast regional outreach and education coordinator Walt Dietz said. “Bass like these areas in relatively shallow water as there is a lot of food available as well as cover provided by the aquatic growth.

“In addition, bass have the capability to take in a good amount of food while not expending a lot of energy, which is important as they add weight prior to the fall and winter months. Bass become keenly aware, almost classically conditioned, to the habitats of frogs in shallow waters, and the better an angler can duplicate the natural behaviors of the frog with a frog lure, which can be everything from how the frog looks to how it moves in the water, the greater the opportunity for success.”

There are different types of frog lures available, and one of the most common and widely utilized is a hollow body made of soft-molded rubber and another being made of a soft plastic. Both are weedless and can be casted into areas containing lily pads, while a hard-body frog lure can be casted and brought back as a topwater bait slightly away from the lily pads.

Of the packaged scented baits, perhaps the most popular and successful is the YUM Frog. With these lures and others, there are definite strategies that can be utilized.

Many frog lures are weedless, and casting with a braided line into the lily pads and retrieving by walking, popping, dragging and skittering — or a combination and controlling the lure in the same way a real frog would move through the vegetation — can create exciting results. It is not always the way the lures look that attracts the strike, it is often the movements and the vibrations in the water and in the right environment that creates the blow up.

Hynick is a member of the Pennsylvania Outdoor Writers Association. Contact the writer: outdoors@republicanherald.com

Stargazing: Loads of summer still in the heavens
Elk Expo coming this weekend
No carping about the action when battling these fish
Wildlife, nature play important outdoors role at county fair