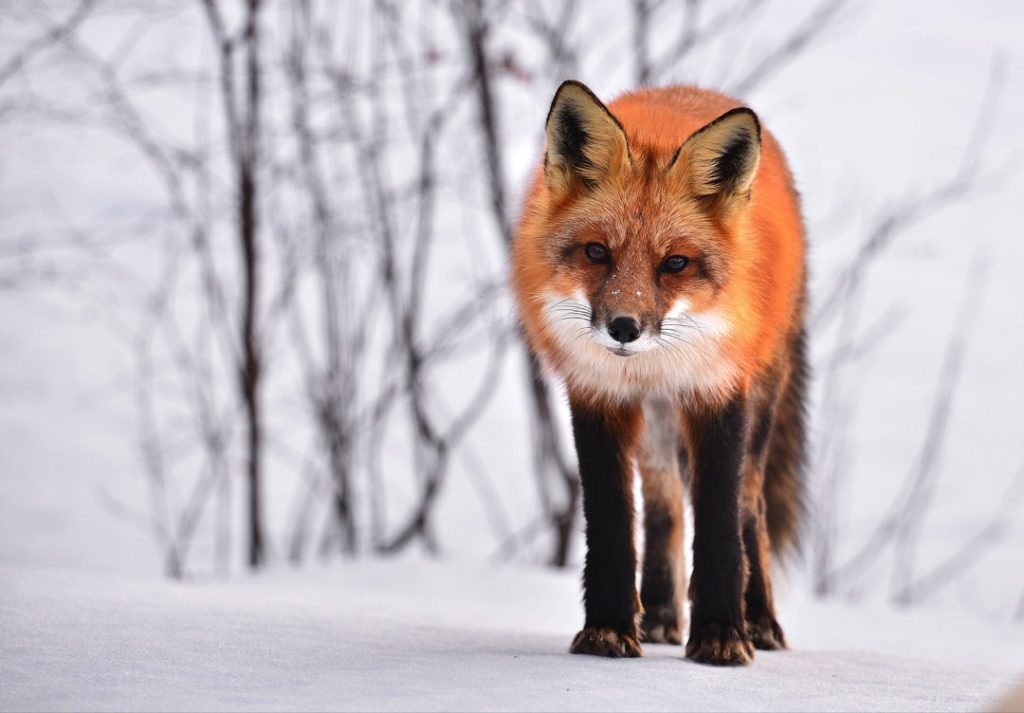 Fox surprises bicyclist out for a ride

A red fox trotted out of the brush into a clearing alongside the road as I approached by bicycle.

It looked at me, dropped food it was carrying and darted back into cover.

Foxes run fast enough to medal in the Olympics so I didn’t expect to see it again.

But I decided to take another look at its food, now lying on the road.

While sticking out of the fox’s mouth, the food appeared to be an ear of corn wrapped in a pale, late-autumn husk. When I looked closer, it was obviously animal, not vegetable. Foxes are omnivores so they will eat plants, but meat makes up a good share of their calories.

This meal, possibly, was a rabbit, which foxes commonly prey upon. No ears and little fur remained. One leg was still attached with a thick, pink-skinned thigh muscle like a chicken drumstick.

Foxes have keen ears and can hear animals digging. You’ve probably seen video of them diving nose first into snow to munch a mouse.

When not excavating, they stalk prey so well that one author,

J. David Henry, calls them “The Catlike Canine” in his book’s title.

They also eat grouse, pheasants, woodchucks, opossums, porcupines, squirrels and domestic animals like cats and chickens if they can find them.

“But if a fox finds an apple tree, a persimmon tree, a deer carcass, they’re happy to eat that, too … That’s what’s available,” Aaron Facka, a furbearer biologist with the Pennsylvania Game Commission said.

Why this fox’s prey had become unrecognizable puzzled me until I read that foxes will store food and relocate caches. The meat might have been buried or left in a den.

Facka saw grass on the pelt, which made him suspect that the carcass had been buried. Even he had trouble identifying the carcass from the photo that I emailed him. He pointed out that the fox might have found the animals’ remains rather than hunted it.

Females or vixens nurse their pups or kits in dens for about a month after giving birth. Males, called dogs, don’t enter dens, but they do deliver food to the litters, which can number more than a dozen.

After the kits are old enough to wander, they go in and out of the den while foraging for two more months before their mother weans them completely by late summer. The rest of the year foxes stay above ground, wrapping up in tails that are 12 inches or longer to keep warm in winter. They are more active at night time than during daylight.

When the fox and I surprised each other, it was Oct. 19 — late fall, so dens had emptied, and most young foxes had scattered to establish their own territories. Sometimes a mother and daughter, however, will stay together through the fall.

Expect to find no more than two of them in a square mile of the farmland, brush, and creeksides of Butler Twp. where I spotted the fox along West Foothills Drive. Forests support six times that many foxes.

There is a Fox Drive in Butler Twp., and Red Fox Lane nearby in Black Creek Twp. The street signs are reminders that the species known as vulpes vulpes has been part of the local scene. Facka said foxes stay where they’re not pushed out by other predators such as coyotes. In suburbs, foxes feed on squirrels and rabbits that no one hunts, plus rodents and garden vegetables and fruits. They even survive in Philadelphia and other cities, primarily in parks.

Until my encounter on the bicycle, I had only seen foxes four times before. One of them was a gray fox, a different species with similar behavior that also lives in Pennsylvania.

I felt fortunate to encounter the fox, but sorry that it dropped its food to flee from me.

Maybe it sneaked back to the road later for supper.