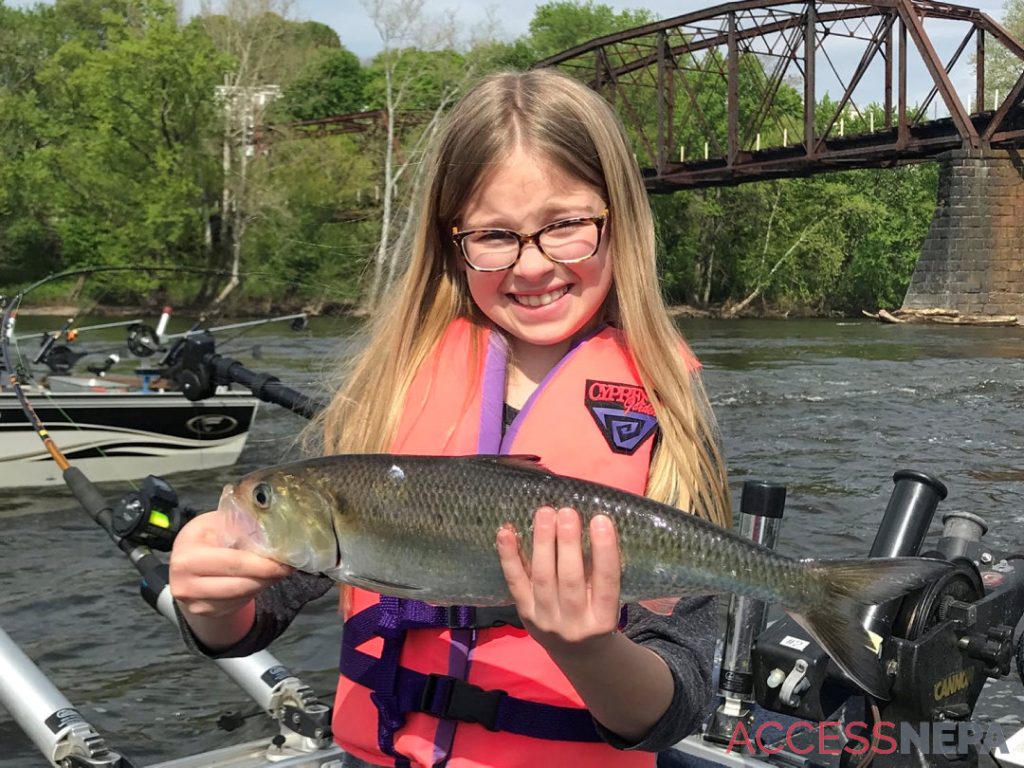 For many anglers spring is synonymous with trout fishing as streams are filled with freshly stocked brooks, browns and rainbows. Some fishermen, however, prefer to set their sights on a slightly larger “King of Spring” by making the drive to the Delaware River to battle the anadromous American shad.

Averaging 4-7 pounds, shad are sleek, powerful fish that make their way up the river each spring on their annual spawning run. In most years, the Delaware is filled with boats and shore anglers looking to tussle with a few of the hard-fighting fish, especially during the peak of the run April through early May.

With the impact that COVID-19 has had this year, some anglers have been hesitant to head out on the water in an effort to practice social distancing and stay away from boat launches and popular shore angling spots. As Pennsylvania starts to ease restrictions and people venture out and about, the good news for shad fishermen is that good angling action can be found throughout May and even into June.

“Every year, I’ll fish into the end of May or sometime the first or second week of June,” said shad-fishing legend George “Shad Pappy” Magaro, who’s been angling for the fish for nearly 50 years. “I’ve caught shad down in Easton all the way up to June 21.”

For anglers who fish later in the season, the two pluses are heavier fish and less competition from other anglers. Magaro notes that during the second half of May and June, you’re getting the late-running fish, which are primarily the female roe.

“They are getting bigger and heavier because the eggs are maturing, so that adds weight back on that they lost during the migration,” Magaro said. “That’s why I like May fishing — you catch bigger fish.”

As far as tactics, the tried-and-true shad angling lures work right through the season’s end. Casting or down rigging with darts and flutter spoons in or adjacent to the river’s channel continues to be productive, even as the number of fish heading upriver begins to dwindle.

“Nothing really changes later in the season,” said Rusty Held, a Lehigh County resident who has fished for shad for 35 years and now offers guided trips for anglers looking to pursue the fish. “I use pretty much all flutter spoons and some guys use a dart and a spoon.”

While many anglers might think the best shad angling action takes place farther upriver in Monroe and Pike counties later in the season, both men say that fish can be caught in the Easton/Northampton county area through the end of May. Magaro says the key to success as the run nears its end is paying attention to water temperatures and depth.

“By the end of the May, temperatures are consistently in the low to mid-60s in most years, so you have to adjust according to the water,” Magaro said. “That time of the year, the water is getting a little lower.

“You want to find current lines and fish the deeper channels. Go with smaller lures, smaller darts and smaller spoons.”

Held, who for years fished right through Memorial Day, agrees.

For those who want to try unorthodox methods for shad angling, fly fishing and throwing inline spinners like Panther Martins and Swiss Swings are two tactics rarely talked about. Both, however, can be effective later in the season.

While many of the shad die after spawning, the ones that survive will often start feeding as they make their way back downriver. Magaro says he has even seen a few fish caught on worms over the years.

“In June, my son has caught them on worms and these fish when they go upriver and spawn stay about 5-6 days and then they head back down the river,” Magaro said. “You get some returners that start migrating back down, so they’re eating minnows, they’re eating crustaceans, they’re eating worms as they do feed once they’re done spawning.”