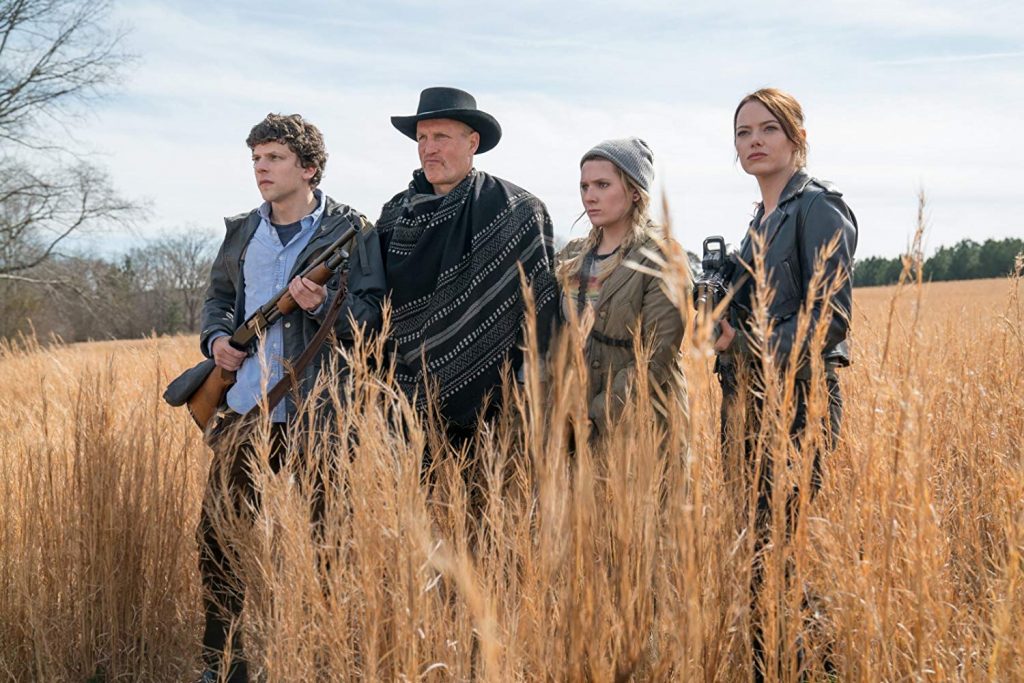 “Enjoy the little things” is a sentiment that I live by. It also comes in at No. 32 on Columbus’ (Jesse Eisenberg) list of rules for surviving the zombie apocalypse in 2009’s cult classic “Zombieland.” Ten years after the hit horror-comedy spun a fresh take on the zombie genre, its long-awaited sequel reanimates the “little things” that moviegoers enjoyed about the first one.

With its star-studded cast in tow, “Zombieland: Double Tap” is a funny and entertaining romp that retains the spirit of the original. The sequel doubles down on its wry humor and violent zombie kills. Though not quite as good as its predecessor, the fun flick injects some needed, if not new, blood into a genre that has become overrun since the 2009 film.

Set a decade after the original, “Zombieland: Double Tap” gets its band of hardened zombie slayers back together. The gun-happy Tallahassee (Woody Harrelson), smart and sensitive Columbus (Jesse Eisenberg) and tough-as-nails sisters Wichita (Emma Stone) and Little Rock (Abigail Breslin) have formed a makeshift family in the aftermath of the zombie apocalypse.

But the dynamics between the four are changing. Columbus wants to take his and Wichita’s relationship to the next level, which unsettles Wichita and causes her to question their romance. Meanwhile, the grown-up Little Rock, who was a little girl when the apocalypse began, is tired of Tallahassee treating her like a child. Frustrated, Little Rock runs away with Berkeley (Avan Jogia), a pacifist musician. With a new kind of zombie – faster and stronger – on the loose, Tallahassee, Columbus and Wichita set out to find Little Rock, meeting more survivors along the way and putting their slayer skills to work.

Confession: I’m not a big fan of zombie films. When the first “Zombieland” came out in 2009, it stood apart from traditional, gruesome and dread-inducing zombie horror, like 2004’s “Dawn of the Dead” remake. “Zombieland” was witty, funny and self-aware. Like 2004’s “Shaun of the Dead,” the film offered an atypical take of the genre, which I really liked. Columbus’ rules, such as “check the backseat” and the No. 1 mandate, “cardio,” apply not only in a zombie dystopia but in real life, and they’ve stuck with me through the years.

Fortunately for fans of the first film, the laugh-out-loud “Zombieland: Double Tap” serves up more of the same humor and jokes. For the gratuitous zombie kills – whether by rifle, bazooka or even historical landmark – Eisenberg gleefully narrates whether the slaying rates as a “Zombie Kill of the Week.” There’s plenty of pop culture references, from Elvis Presley to the “Terminator” films to a dig at “The Walking Dead,” which invaded TV screens a year after the first “Zombieland.” The AMC series, known for its major character deaths, has catapulted zombies into regular TV viewing. “Zombieland: Double Tap” reminds us the genre doesn’t have to be so serious and that it’s OK to laugh.

Returning director Ruben Fleischer succeeds in reassembling his likable cast from the 2009 film, all of whom have made big strides in their careers in the last decade. Harrelson, Eisenberg and Breslin have been nominated for Academy Awards, and Stone won a Best Actress Oscar for “La La Land.” Yet despite the long gap, the actors comfortably step back into their roles. Harrelson is loud and bombastic as Tallahassee, delivering the right amount of over-the-top antics. In a part that has become familiar for him, Eisenberg plays the always-thinking member of the group. Breslin captures Little Rock’s wishes for a better life as her character has matured since the first film. Oddly enough, it’s Stone, the Academy Award winner, who’s underused as Eisenberg carries the weight of their relationship dilemma.

As nice as it is to see the original cast, “Zombieland: Double Tap” introduces memorable new characters. The breakout is the hilarious Zoey Deutch as the bubbly but air-headed Madison, who has survived the zombie apocalypse by living in a shopping mall. Deutch brings the laughs as the upbeat Madison doesn’t mesh with most of the group’s sarcastic personalities.

The new faces also include Rosario Dawson as Nevada, a feisty Elvis fan who can go toe-to-toe with Tallahassee. Luke Wilson and Thomas Middleditch form their own dynamic duo as Albuquerque and Flagstaff, two wandering zombie slayers who look and act remarkably like Tallahassee and Columbus. But Jogia’s Berkeley doesn’t add much to the group. The character is mainly a plot device used to drive the story forward.

At one hour and 39 minutes, “Zombieland: Double Tap” is fast-paced and doesn’t overstay its welcome. Be sure to stay through the end credits to see a fan-favorite character from the first film get their due.

Despite the decade-long break in between films, “Zombieland: Double Tap” resurrects a good time at the movies. Maybe a sequel wasn’t necessary after all these years, but as someone who “enjoys the little things,” I’m glad it exists. 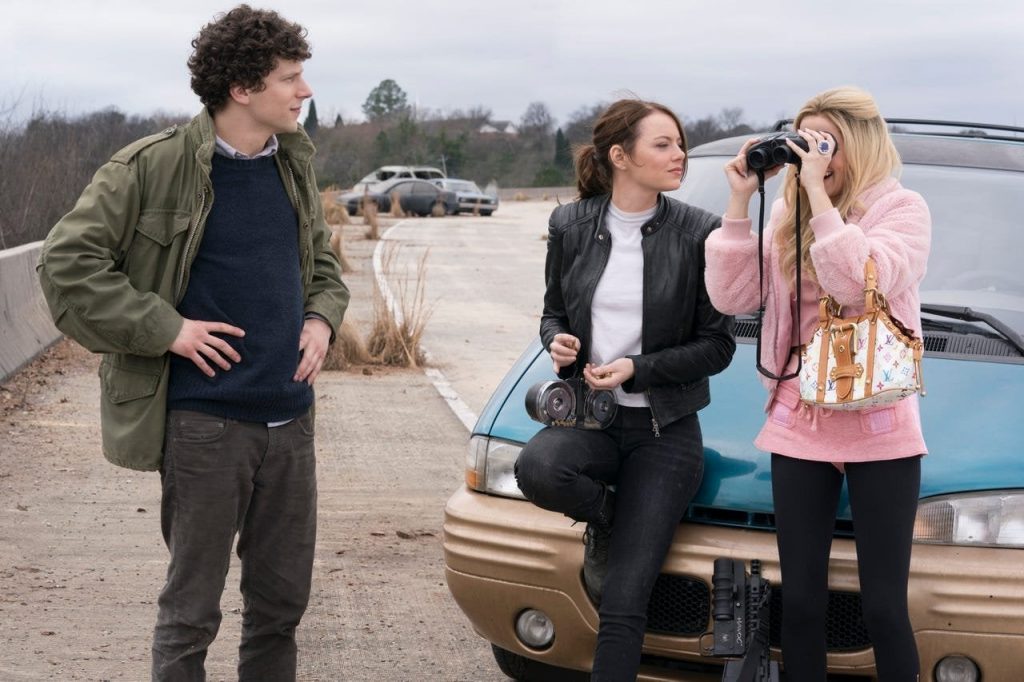 Woody Harrelson (Tallahassee), Jesse Eisenberg (Columbus), Emma Stone (Wichita) and Abigail Breslin (Little Rock) are in different stages of their careers, but they decided to return to “Zombieland” for a sequel, “Zombieland: Double Tap.”

Although 10 years passed before the release of the second installment, not much has changed in Zombieland. All the characters act the same and Breslin is the only one who looks significantly older. The feel of the film is pretty much the same as Ruben Fleischer returned to direct, and the plot doesn’t deviate much from the original as Rhett Reese and Paul Wernick returned as writers. The opening credits are even shot to another Metallica song (“Master of Puppets” in 2019, “For Whom the Bell Tolls” in 2009) and the climax takes place in a central location with a lot of lights and noise.

“Zombieland: Double Tap” is essentially the same film as the first. Is that a bad thing? Not necessarily. The film is 10 years removed from the first installment so it doesn’t seem so stale upon revisiting the franchise. It also tacks on some new characters, including Madison (Zoey Deutch). Deutch’s performance could have made or broken the film and she nails it.

The ditsy Madison joins the group and her humor really lands. The film spends the right amount of time on her, too, so her schtick never becomes overbearing. The other new characters don’t add much, so Deutch really does a nice job keeping the movie fresh.

The Luke Wilson (Albuquerque) and Thomas Middleditch (Flagstaff) bit from the trailer wears thin quickly, but they are not used much. Luckily a lot of their screen time is spent on the film’s best action sequence, a well-choreographed tracking shot.

The zombies are now separated into categories based on threat level, which ends up not having much of an impact. Everything else is pretty much the same.

The audience gets to revisit the characters they loved from the first film. The core four, Harrelson, Eisenberg, Stone and Breslin, have great chemistry. This is no shock as they have combined for eight Oscar nominations and one win. It’s an entertaining film with mostly good humor and solid action. And the during the credits scene is worth the watch.

Weird as it is to see “Zombieland: Double Tap” in 2019 instead of 2011 with the main actors in different stages of their careers, the sequel delivers a fun film for fans of the first installment. There are a few beats that don’t work, but the movie quickly moves past them as the pace is perfect. The film is a crisp 99 minutes. Deutch stands out among the new characters and the core four shines again. Those expecting more from a sequel 10 years later will be disappointed. The key is to enjoy the little things … Rule 32.