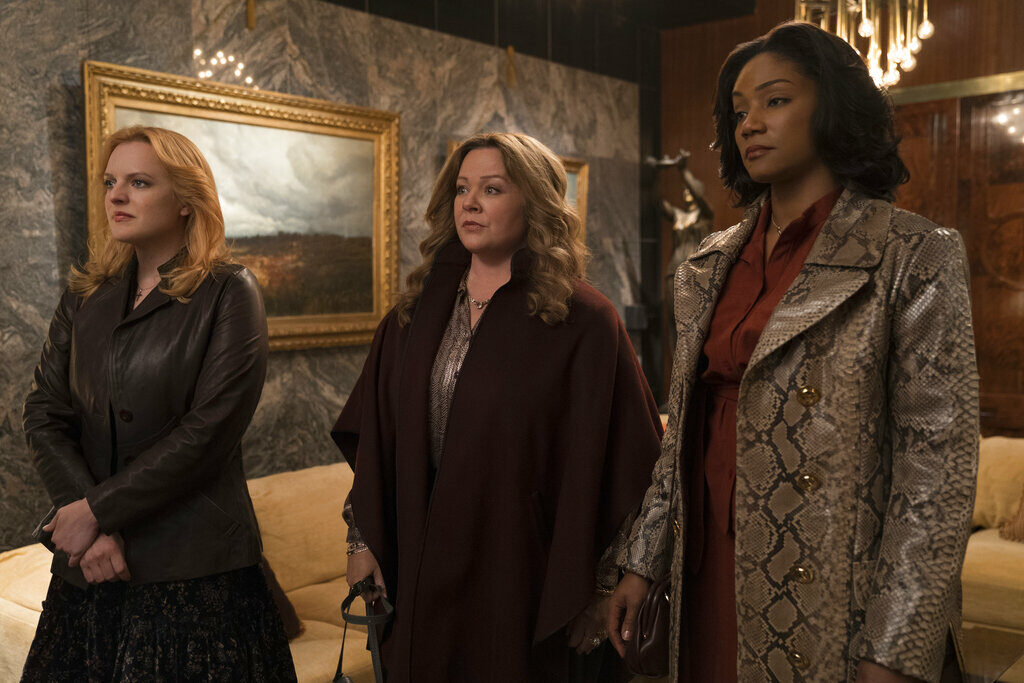 Though it had limited advertising, “The Kitchen” intrigued audiences with its cast, especially its three leading women. Two-time Academy Award nominee Melissa McCarthy has shown incredible range as a comedic and dramatic actress. Elisabeth Moss earned an Emmy and a couple Golden Globes to go along with a plethora of nominations during her stellar television career. Tiffany Haddish is a star after the breakout hit “Girls Trip” (2017). She has 13 credits in 2019, according to IMDB. A proven comedy actress, Haddish takes on a more dramatic role in “The Kitchen.”

Andrea Berloff, a writer for “Straight Outta Compton,” takes her first seat in the director’s chair.

Everything pointed to critical acclaim, which made the film’s failure all the more disappointing.

Based on a graphic novel of the same name, “The Kitchen” is set in 1970s Hell’s Kitchen, a neighborhood in New York City. Kathy Brennan (Melissa McCarthy), Ruby O’Carroll (Tiffany Haddish) and Claire Walsh (Elisabeth Moss) try to rise power In order to survive after their gangster husbands go to prison.

The three leads meet such little resistance in their rise to prominence to the point of absurdity. Sure, there are a few hiccups along the way, but nothing more than that. How do they acquire this power? By stealing customers from gangsters. What credibility do they have? None. Do these customers hand their money right over to these three women? Yep. At one point, McCarthy’s character offers her kids’ aid to the clean the walls of graffiti outside of a local business. These businessmen and women need protection from criminals and they are sold on the help of children?

How do the gangsters respond to losing their business? With threatening looks and angry talk, of course. When the head gangster finally does act, always-in-the-right-place-at-the-right-time Gabriel O’Malley (Domhnall Gleeson) is there to save the day.

“The Kitchen” leans on its great actors to create magic, but they could only do so much with such a bland script, far-fetched story and short run time (one hour, 42 minutes with credits). The characters are one note and barely explored. The movie tells the audience it should care, but it only shows the basics of why. Moss’ character is the closest this movie has to an arc, but the film never completes it.

McCarthy’s character never really seems as powerful as the movie suggests through her performance. She looks too vulnerable most of the time. While there’s no problem with making her vulnerable, she needed to put on a face of strength more often in the public eye.

Haddish’s character is also one note. She brings a bravado to her performance that makes her feel empowered for the entire movie, even though in the beginning she isn’t supposed to feel empowered yet.

Berloff strikes out looking in her directorial debut. For a movie based on a graphic novel, it’s amazing how bland it turned out. There are no memorable shots. Just a lot of talking … and walking. It accentuates the film’s lack of a story and character development. These leads who the audience needs to get behind don’t do anything to earn their positions.

“The Kitchen” completely derails with its third-act twist. The audience didn’t see it coming, not because of great filmmaking. It just didn’t belong or have any impact on the story.

The film fails to answer basic questions. What is it about? Why was it made? Why did so many great actors sign on to do it?

“The Kitchen” left audiences feeling just as bland as the plot. It is the biggest waste of talent in 2019 and among the worst movies the season has to offer. The film can play “The Chain” as many times as it wants. But it won’t keep it together. 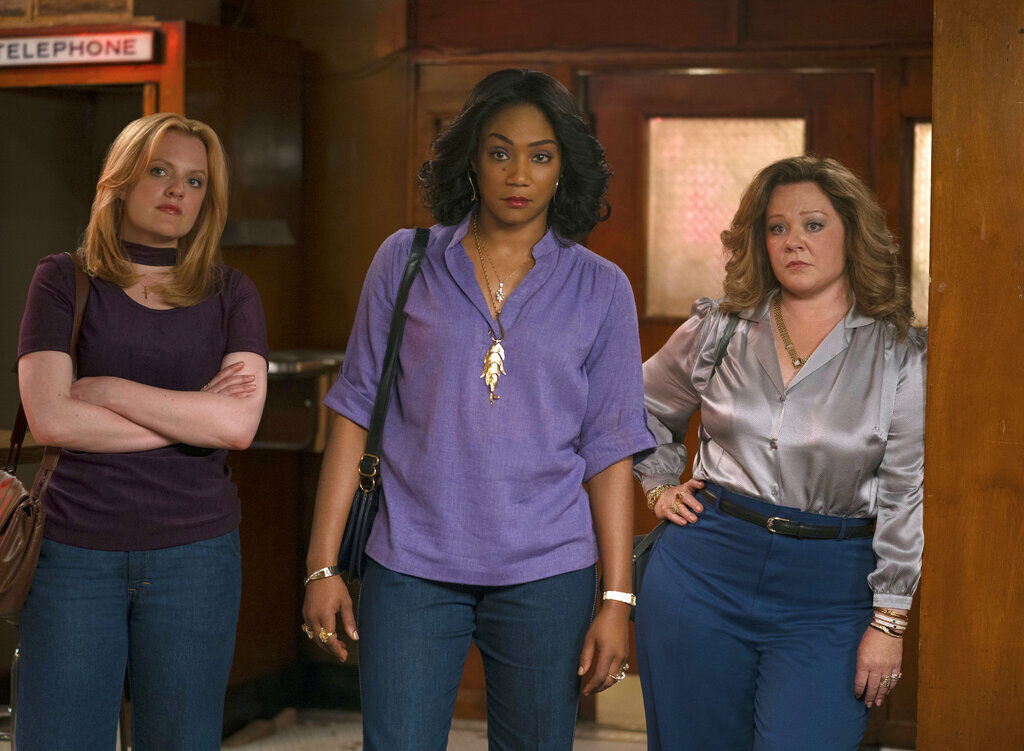 Melissa McCarthy, Tiffany Haddish and Elisabeth Moss bring the heat in “The Kitchen,” a mob tale with a female-empowered spin. Set on the mean streets of Hell’s Kitchen during the 1970s, the edgy crime drama is buoyed by the strong performances of its three leads, including serious turns by two of the funniest actresses in film today.

But under the inexperienced hand of a first-time director, “The Kitchen” is undercooked. The talent of its charismatic stars partially masks the gangster flick’s deeper issues.

“The Kitchen” follows three housewives married to members of the Irish mafia in New York in 1978. Kathy (McCarthy) is the sensible mother of two children. Ruby (Haddish) is an outsider who married into the mob, and Claire (Moss) is a church volunteer who is abused by her husband.

When their husbands are arrested in a sting operation by the FBI, the three women are forced to fend for themselves. Unable to find lawful work, they take over their husbands’ criminal activities, offering protection to neighborhood businesses where the local mob has slacked off.

As Kathy, Ruby and Claire rack up money and power, they are drawn deeper into the violent underworld, leaving a rising body count in their wake. When their husbands are released from prison, the increasingly ruthless trio must fight to hang onto the empire they have built.

Taking place during the feminist movement, “The Kitchen” benefits from its time period. With mentions of Gloria Steinem and support from female business owners, Kathy, Ruby and Claire seize upon the opportunity to raise their status during their husbands’ absence. While encountering resistance from the male members of the mob, the three wives must tap into skills they didn’t know they had.

Each woman has a part to play. The versatile McCarthy, known for raunchy comedies like “Bridesmaids” and “The Heat,” is the brains of the operation as the quick-thinking Kathy. Despite a fluctuating New York accent, McCarthy sells Kathy as a mother willing to do whatever it takes to protect her kids and herself. Drawing on her Oscar-nominated performance for “Can You Ever Forgive Me?” earlier this year, McCarthy delivers an inspiring monologue in the third act.

The fast-talking Haddish, whose comedic star has been on the rise since 2017’s “Girls Trip,” becomes the women’s mouthpiece as Ruby. As a black woman who married into a disapproving white family, Ruby seeks to secure her place and develops handy negotiation skills. In her first serious role, Haddish takes charge onscreen, revealing a steely determination. She holds her own again her domineering mother-in-law, played by veteran actress Margo Martindale.

But it’s Moss who undergoes the most striking transformation as Claire. The abused housewife becomes the group’s muscle, empowering herself by learning how to kill. Acclaimed for her award-wining work in “The Handmaid’s Tale,” Moss gets her hands dirty in some of the most shocking scenes in “The Kitchen,” yet she retains moviegoers’ sympathy every step of the way. Whether Claire is taking a shot point-blank or learning the dubious art of disposing of a body, you can’t help but root for the character.

Moss shares a nice chemistry with Domhnall Gleeson, who stands out as a traumatized hitman returning from serving in Vietnam. But the three husbands – played by Brian d’Arcy James, James Badge Dale and Jeremy Bob – are mostly forgettable. Common is little used as an FBI agent.

While its actresses carry the film, “The Kitchen” starts to burn out under its flawed filmmaking. Based on a Vertigo comic, the movie lacks the energy of other comic book adaptations. Andrea Berloff, who co-wrote the screenplay for “Straight Outta Compton,” makes her directing debut here with mediocre results. The direction comes off as flat.

The film heavily relies on shots of its cast walking and taking, or people sitting around and talking. As a result, many scenes feel stilted, and it affects the flow of the dialogue. In scenes involving characters besides the three leads, the actors sound like they are taking turns speaking instead of actively participating in a back-and-forth conversation.

The script does throw in some surprising twists. But after everything that’s at stake for the main characters, the ending is tied up rather neatly and too abruptly.

“The Kitchen” is worth seeing for its trio of leading women. But it’s a few ingredients short of a satisfying mobster flick.