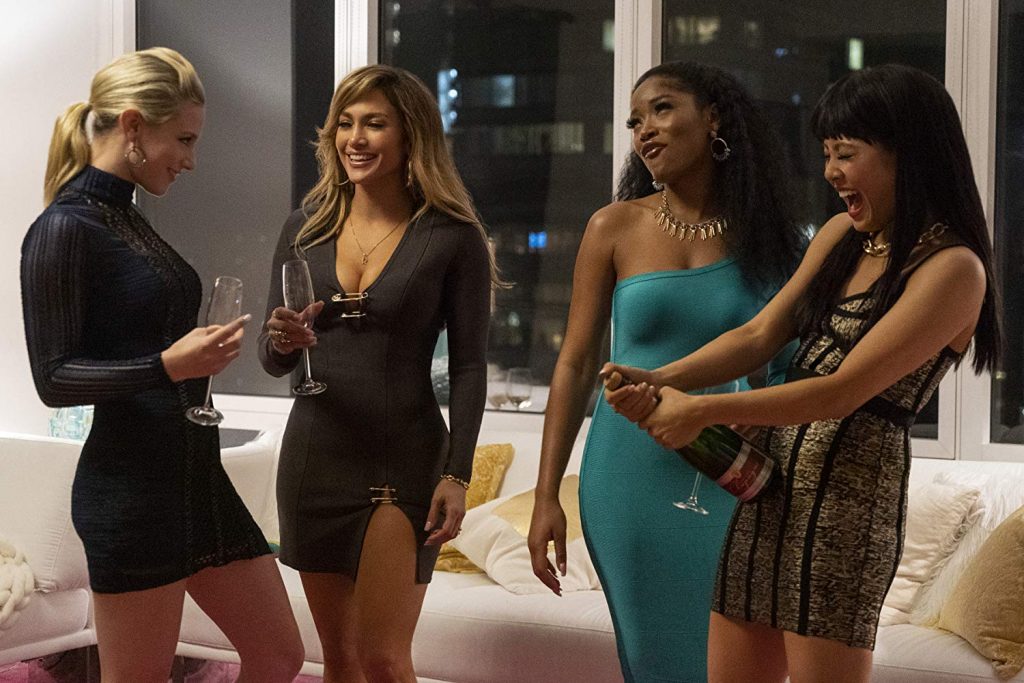 “Hustlers” didn’t inspire much confidence with its trailer. It provided a run-of-the-mill story and seemed to rely on showing off the women. It had a good enough cast with Constance Wu (“Crazy Rich Asians”) and Jennifer Lopez, but padded its supporting roles with rappers/singers Cardi B and Lizzo. With its mid-September release, “Hustlers” had 13% at Rotten Tomatoes written all over it. Audiences got a hidden gem instead.

Based on a true story, “Hustlers” has more to it than any kind of advertising would lead the potential audience to believe. Yes, there is nudity. It is a movie involving strippers, but it is about finding a way to survive in the world, provide for family and take control. It also touches on the housing crisis and the difficulties of living through that. Their struggle struck a cord because everyone can relate.

With a strong story in place, “Hustlers” needed the acting firepower to solidify the emotional weight of these women’s hardships and successes. The audience had to care. Constance Wu and JLo were more than up to the task. JLo even earned Oscar buzz after the movie’s release. While it’s too early to tell if she’ll be in the running, JLo’s performance cannot be denied. It’s been a while since she’s had a notable role, but she has always been a good actress. Wu also excels as their friendship drives the film.

“Hustlers” also knows its actors and puts them in the perfect positions to succeed. Mostly known for their talent in the music industry, Cardi B and Lizzo have small roles as the film leaves its more important characters to actors. The movie eventually zeroes in on Wu and JLo’s relationship with Keke Palmer and Lili Reinhart (“Riverdale”) filling out the quartet of thieves. Palmer and Reinhart play their parts, not really sticking out but not doing anything to hurt the film. Reinhart has a comedic beat the movie plays many times, but it never gets old.

Julia Stiles portrays a reporter as the film tells most of the story through her interview with Wu’s character. The filmmaking style worked, but Stiles wasn’t given much to do.

When it focuses on the characters, “Hustlers” is at its best. The sisterhood formed allowed the audience to feel for these women. Also, the film gives the audience limited male characters. Men have a place in the plot but no influence over the story that needs to come solely from the perspective of women.

The only knock against “Hustlers” is that it’s not an Oscar film, which is fine. The only thing Oscar-wise that sticks out is JLo. The buzz is strong, but it’s key to keep in perspective the Oscar talk starts and ends with JLo. The film is surprisingly good, but not a masterpiece.

“Hustlers” thrives behind strong performances and character building explored in an unexpectedly powerful and relatable story. JLo reminds everyone she can still act and Wu adds another critically acclaimed film to her resumé. The movie delves into female empowerment for sure, but it can be enjoyed by all and speak to anybody’s problems. Everyone struggles to make ends meet at some point. Because it captured the audience’s investment in the characters, “Hustlers” isn’t struggling to makes ends meet and may finish the year as the biggest surprise of 2019.

As smart as it is flashy, “Hustlers” rings up a female-empowered story about struggling strippers who scheme their Wall Street clients, banking upon the strong performances of its talented cast of actresses. The entertaining heist flick looks at the aftermath of the 2008 financial crisis from the women’s point of view, adding a new voice to the genre.

The film marries style with substance. “Hustlers” revels in its glitz and glamour while also stripping it all away. The film is not just a story about a con, but a celebration of female friendship.

Based on a New York Magazine article, the film follows a group of strippers who work at a New York City nightclub frequented by Wall Street bankers and executives. Before the financial crisis, experienced stripper Ramona (Jennifer Lopez) and new-to-the-club Destiny (Constance Wu) strike up a friendship and work together to entice their clientele to open their wallets. The two women are rolling in money. But afterward, the club is struggling to draw customers, and the strippers aren’t making enough to get by.

As the strippers start taking other jobs, Ramona comes up with a scheme: drug the Wall Street traders and steal their money by charging their corporate credit cards. The men will be too embarrassed to report the crime. The con works, and the women reap the wealth. The group grows closer as they can now support themselves and their families.

But as they get richer, the women start taking more risks. As Destiny begins to question Ramona’s decisions, law enforcement is taking notice. How much longer can the women’s scheme – and friendship – continue?

Under the dynamic direction of Lorene Scafaria, “Hustlers” shows what a group of savvy, working-class women can accomplish to survive. The fun, fast-paced flick perfectly balances the story’s drama and humor. Its style is reminiscent of 2015’s “The Big Short,” but as told through the perspective of women.

The female cast knows how to wield their sex appeal to their benefit. The kinetic camera follows the strippers on neon-lit stages and darkly lit back rooms as they work for their money, and zooms in on the furs, purses, cars and apartments they can buy with it. Montages celebrate the women’s conquests over the clueless stockbrokers.

The heart of “Hustlers” lies in Ramona and Destiny’s friendship. They are a pair of kindred souls – two intelligent and resourceful women who are often underestimated by the world around them. Lopez and Wu share a believable camaraderie as the two characters bond over motherhood and their shared success.

In one of her best performances, Lopez commands the screen as the driven Ramona. The shrewd stripper has a keen understanding of the Wall Street types she’s dealing with. In a compelling monologue, Ramona justifies the scheme. She points out how the money the bankers are using is “dirty” from the financial crisis they played a role in starting, and how none of them have gone to jail over it. Her argument helps to get moviegoers to side with her and the women.

As Destiny, the likable and sympathetic Wu (“Crazy Rich Asians”) serves as moviegoers’ introduction to the stripper world. Taking care of her debt-ridden grandmother and her daughter, Destiny acts as the film’s conscience. Initially, she’s taken in by the scheme’s money and financial security. But the longer the fraud goes on, the more she questions it. Through her character, the audience sees the other side of the scam and how it affects the men targeted.

The supporting cast of “Hustlers” gives enjoyable performances. Lili Reinhart (“Riverdale”) plays Annabelle, a sweet but nervous stripper who doesn’t want to move back home. As Mercedes, Keke Palmer is trying to make ends meet while her fiancé serves time in prison. As the reporter upon whose story the movie is based, Julia Stiles offers a patient ear and some comic relief. Oscar winner Mercedes Ruehl pops up as Mother, a strip club employee who looks out for the girls. And rapper Cardi B brings the sass in her movie debut.

Clever and thought-provoking, “Hustlers” pays huge dividends. This is an excellent film that audiences can take to the bank.