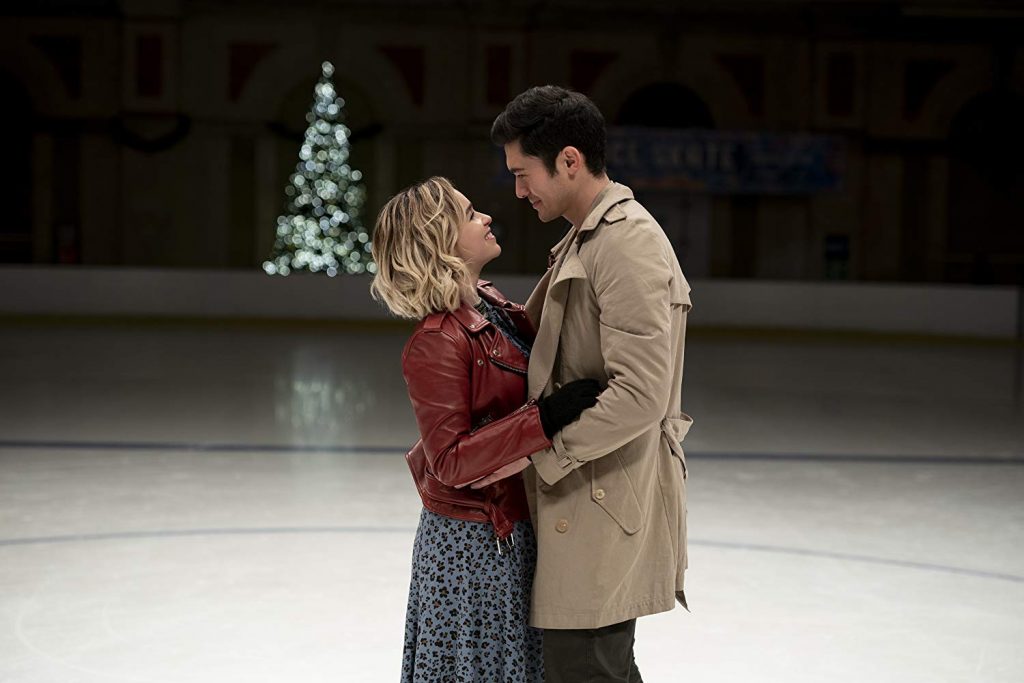 Emilia Clarke takes on her first project since starring as the Mother of Dragons on the recently wrapped up HBO series “Game of Thrones.” Instead of demanding her subordinates bend the knee, she serves as an elf at Santa’s store in director Paul Feig’s (“Bridesmaids,” “A Simple Favor”) romantic comedy “Last Christmas.” Not a real elf for the real Santa Claus, but Clarke plays Kate, who dresses as an elf to work at a store run by a woman named Santa.

Kate has struggled to find herself ever since her “sickness” and as a result she resorts to drinking, sleeping with strangers and slacking on her responsibilities at work. She is also homeless, only because she refuses to go home to her parents, and stays with friends. However, her lack of respect quickly wears thin and she ends up back on the street. Just as she’s hitting rock bottom, Kate meets a mysterious man named Tom (Henry Golding).

The plot sets up as a cookie-cutter romantic comedy and for the most part it is. That doesn’t make it bad. That also doesn’t make it good. But that’s not always the question. Sometimes movies exist to provide the audience exactly what it wants. The “Last Christmas” trailer sells a romantic comedy with a strong cast, proven director and George Michael’s music. That’s what the audience gets.

Clarke felt so natural in the leading role, which really helped sell the character and the movie. She lights up the screen and the audience feeds off her energy. It was the perfect change of pace after “Game of Thrones” as she proved incredibly relatable and warm as Kate.

Golding once again fits perfectly in a supporting role. Coming off solid work in “Crazy Rich Asians” and “A Simple Favor,” Golding builds great chemistry with Clarke and makes the audience care about their relationship almost immediately.

Emma Thompson (Kate’s mother Petra) and Michelle Yeoh (Santa) fill out the supporting cast nicely. Thompson is good in everything and Yeoh’s friendship with Clarke plays an important role in the film.

The likability of the actors drives “Last Christmas” and the dialogue is pretty solid for the most part as Clarke and Golding have some pretty good back-and-forths. It all makes for a fun, humorous and heart-warming film … as long as the audience isn’t looking for a great plot. In fact, it’s best not to think very hard about the plot … or maybe just ignore it all together. Unfortunately, it just doesn’t work or make any sort of sense. It could even derail the movie for some.

Fortunately, everything else is just too darn likable to let it effect the film’s watchability. And so it gets the rare pass.

“Last Christmas” provides the target audience exactly what it wants as far as characters, humor and emotional attachment. George Michael has fun, catchy music, although whoever pushed his music into the movie may like him a little too much. Clarke goes all in on the leading role, which gives the film heart and relatability. The supporting cast only builds off that to make a heartwarming film. It fumbles the main plot point pretty badly, but I’m not going to let that completely take away from all the fun I had. 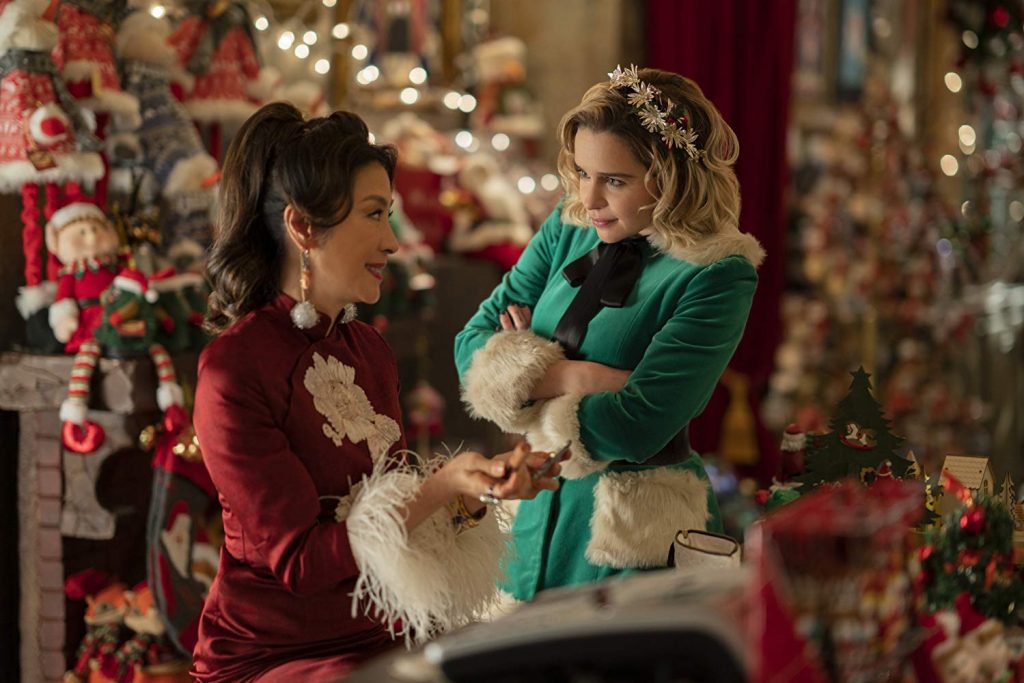 As holiday decorations fill store shelves and Christmas carols hit radio airwaves, Christmastime is upon us. It’s that time of year where Hollywood pumps out Christmas movies for those of us who love a feel-good holiday flick that warms our hearts.

It’s also time to break out the eggnog, because you may need it after watching “Last Christmas.” This year’s big-screen offering brings together a delightful cast, talented director in Paul Feig and lots (lots!) of George Michael music, including the popular holiday song it’s named after. But if you’re looking for the traditional Christmas rom-com, “Last Christmas” isn’t it.

The poorly scripted film takes a wacky turn that derails the good will the movie had up to that point, leaving moviegoers to wonder how they ended up with this lump of coal.

Fresh off her role as the Mother of Dragons on HBO’s “Game of Thrones,” Emilia Clarke trades in her fiery friends for an elf suit. Clarke stars as Kate, a Yugoslavian immigrant living in London who works at a Christmas shop.

Recovering from an illness, Kate’s been having a rough go of things. After a row with her family, including her overbearing mother (Emma Thompson), the hard-drinking young woman is sleeping on her friends’ couches before her inconsiderate behavior keeps getting her thrown out. She’s slacking on her job, putting her at odds with her boss, Santa (Michelle Yeoh). Basically, she’s a hot mess.

Then Kate meets Tom Webster (Henry Golding), a mysterious man who pops up outside the store. As Tom and Kate spend more time together, the dashing gentleman helps Kate relearn the wonder of the Christmas season – and see what’s she missing out on in life.

On the surface, “Last Christmas” sounds like the stereotypical Christmas movie you expect it to be. Under the direction of Feig, who has helmed such laugh-out-loud comedies as “Bridesmaids” and “Spy,” the film was brimming with potential.

If you’re like me and you’ve watched many of the Hallmark, Lifetime and Netflix Christmas offerings over the years, there’s a formula these movies follow. As viewers, we’re usually OK with this because we know exactly what we’re getting. Girl and guy meet, romance ensues, and the magic of Christmas ensures things work out in the end. But “Last Christmas” throws out this formula with the gift wrappings.

At first, it’s cute how Kate and Tom keep meeting. Clarke and Golding have great chemistry. After strong turns in “Crazy Rich Asians” and “A Simple Favor,” the charming Golding continues to build his resume as a leading man. But this pattern of “wash, rinse, repeat” also causes the first half of the movie to feel repetitive. The script doesn’t give viewers enough information upfront to understand why Kate is acting out the way she is. It’s not until the film’s second half that more about Kate’s condition is revealed, helping audiences get a better read on the character.

The only reason Kate is even initially likable is because of Clarke’s effervescent performance. Clarke has a knack for comedy, with her crinkled eyes, mischievous grin and clumsy pratfalls, winning over moviegoers. But the soulful actress, nominated for an Emmy for her role on “Game of Thrones,” expertly taps into Kate’s sadness and vulnerability when the film calls for it. Until then, the script holds its cards too close to the vest.

And did I mention the crazy twist? Get ready to pour the eggnog. With a script written by co-star Thompson and her husband, Greg Wise, “Last Christmas” takes viewers down a bizarre road. The film may follow the lyrics of the titular song too closely, setting up viewers for a reveal that pulls out the rug from underneath them. And soon after the disclosure, the movie throws itself hard into the Christmas theme – embracing Christmas lights and a heartfelt holiday song – hoping viewers will move past this turn. For this Take 2 reviewer, it didn’t work.

“Last Christmas” may also have a little too much in its stocking, bouncing around several subplots. There’s a secondary romance involving Santa, as well as Kate’s lesbian sister (Lydia Leonard) hiding her relationship from their parents. There’s even a plotline involving the United Kingdom’s Brexit dilemma and its impact on London’s immigrant community, which is more interesting than the other storylines, but is only touched upon here. These subplots give Yeoh and Thompson a chance to shine but take away from the main story.

Instead of giving your heart to “Last Christmas,” you may be better off blasting the Wham! classic. Despite its likable cast, the holiday film unwraps a disappointing gift that moviegoers would rather return.