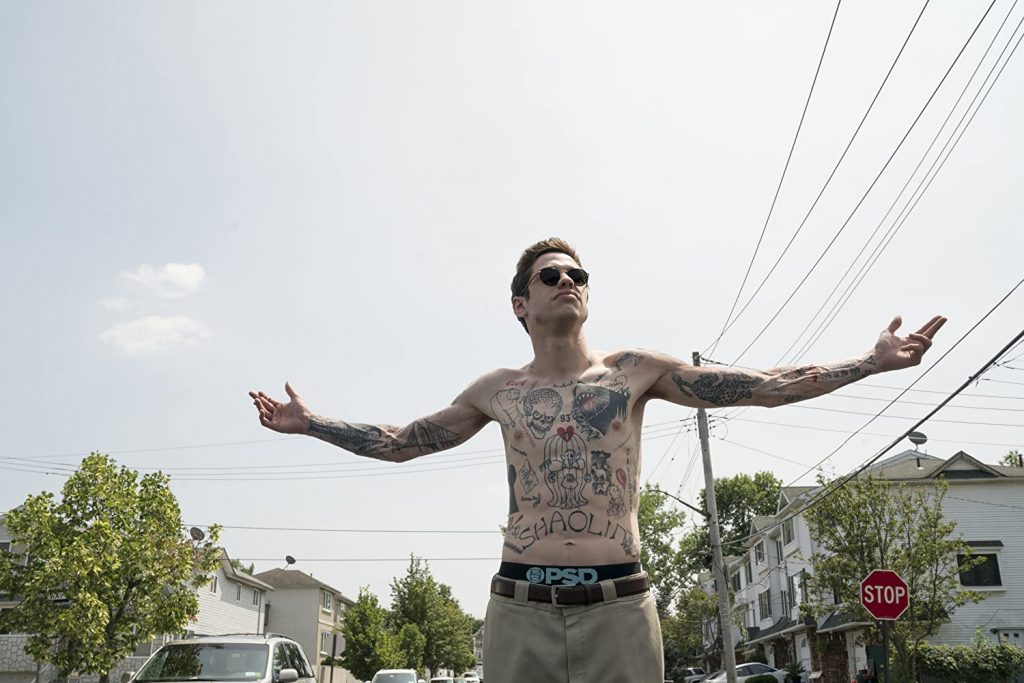 Review: “The King of Staten Island”

Before “The King of Staten Island,” I had heard of Pete Davidson, but I hadn’t seen any of his comedic work. The most I knew about the “Saturday Night Live” star was that he was briefly engaged to singer Ariana Grande. This wasn’t a lot to go on, so I went into the comedy-drama not entirely knowing what to expect from the controversial comedian.

I realized soon into “The King of Staten Island” that judging Davidson by his romantic exploits was a mistake. The comedian shows true acting chops in the funny and honest, although uneven, film based on his own life.

Serving as the muse for director and co-writer Judd Apatow’s latest effort, Davidson plays Scott Carlin, an emotionally stunted man whose father, a firefighter, died when he was just a kid. Now 24, Scott is jobless and still living at home with his mother, Margie (Marisa Tomei). Dreaming of becoming a tattoo artist, the aimless Scott spends his days smoking weed with his buddies and secretly hooking up with his childhood friend, Kelsey (Bel Powley).

But Scott’s world changes when his mother starts seeing the outspoken Ray (Bill Burr), another firefighter. As Ray and Scott butt heads, the young man must confront his long-standing grief and finally face the responsibilities awaiting him as an adult.

A good blend of comedy and drama, “The King of Staten Island” is raw and realistic, a revelatory showcase for its young star. The charming Davidson proves himself a natural as the film’s beating heart. His affecting lead performance is its biggest strength. The mature and introspective film is also Apatow’s best in years, surpassing 2015’s middling “Trainwreck” and 2012’s depressing “This Is 40.”

A collaborator on the script, Davidson pulls from his own life experience while showing a mastery of acting beyond his years. He can be serious and funny, sometimes both at the same time, which is a difficult feat for any actor to accomplish. In an early scene, Scott’s level-headed sister, Claire (Maude Apatow), who’s heading off to college, sits him down to talk about what he plans to do with his life. As he verbally spars with his sister, Davidson perfectly taps into the simultaneous humor and sadness of Scott’s responses.

The actor earns sympathy from the audience as Scott struggles with his father’s death and his own health ailments, such as ADD and Crohn’s disease. But as he professes to still be “working on myself,” Scott has never been held accountable for his actions. It’s a fascinating look at a man allowed to behave like a man child until Ray’s arrival.

The supporting cast is outstanding. As Ray, Burr provides a perfect counterpart to Scott as the testy firefighter upends the other’s mediocre existence. The dynamic Burr can switch from likable to unlikable on a dime as the audience, much like Scott, is figuring out whether to trust him. Their relationship grows as the two begrudgingly learn from each other.

Tomei delivers much more here than the stereotypical mother figure. Instead of nagging her son, Margie let Scott get away with too much in the wake of his father’s death. As Scott is thrust into building a life of his own, Margie embarks on a parallel journey of learning to stand up for herself and embracing her independence.

While the high level of acting props up “The King of Staten Island,” the film’s flaws take away from its luster. Its unnecessary length, structural issues and rushed resolutions put a few dents in its crown.

With a running time of over two hours, the film feels its length, especially in the middle. After a methodical buildup, “The King of Staten Island” tries to squeeze too much into its third act, which is when the film hits its stride. The film would have benefited from moving up its final-act developments earlier, giving them time to breathe.

Despite its long length, the film struggles to balance all its subplots. Certain storylines aren’t given enough time to develop, while others just fall away. Some character decisions, although they push the plot forward, feel abrupt and head-scratching.

The subplot about Scott and Kelsey’s relationship features an earnest performance from Powley, who expresses a palpable frustration with the couple’s unclear status. But the film doesn’t explore it enough before giving it major significance in the final act.

“The King of Staten Island” shows Davidson has what it takes to be a leading man. The talented comedian holds viewers in the palm of his hand throughout the heartfelt film, giving viewers a new king of comedy to root for. Having seen the SNL star in action, now I want to check out his other work. But despite the strong acting from Davidson and the cast, “The King of Staten Island” falls just short of being as great as it could have been. 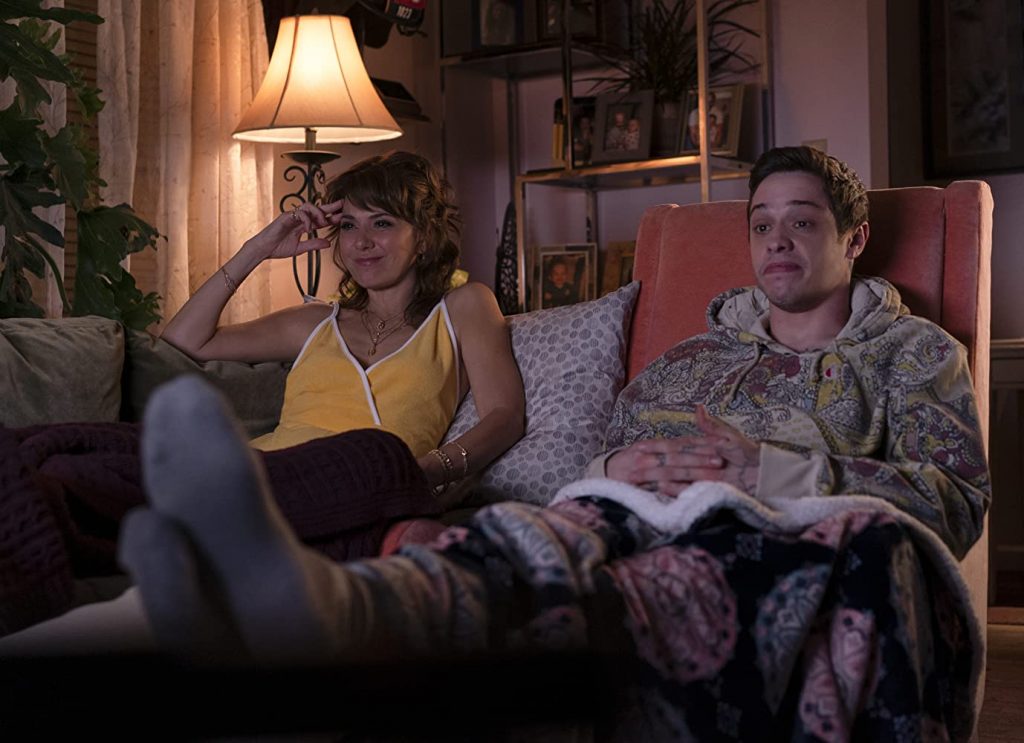 Marisa Tomei and Pete Davidson star in “The King of Staten Island.”

I knew Pete Davidson from “Saturday Night Live.” I saw him in Easton when he toured with John Mulaney. I knew of his high-profile relationships with Ariana Grande and Kate Beckinsale. I’ve always enjoyed his humor, but I never thought he could play a lead in a good movie.

Enter “The King of Staten Island.”

In a film loosely based on his life, Davidson (Scott Carlin) thrives as the frontman, giving a comedic yet moving performance. He looks like a 30-year veteran on screen as he pulls the audience in during the first scene. In a scary sequence, Carlin forces his eyes shut as he drives into traffic, barely avoiding a harmful crash. Davidson displays a great ability to portray emotion. His acting demands a level of sympathy from the audience, even though it doesn’t know why it should feel that way yet.

Every scene comes so naturally to Davidson. Sure, it helps he understands what the film is going for considering he was one of the writers on it and it is based on his experiences. However, it doesn’t mean it’s still not impressive. He had me laughing one minute and sympathizing with him the next. He never wavers and proves the best part of the film.

The screenplay, which Davidson teamed up with director Judd Apatow and Dave Sirus on, proves a strength as well. The dialogue provides great humor and dramatic sequences. It also sets up some great verbal action scenes, creating fun back-and-forths and emotional drama.

The great cast further elevated the script and Davidson. Marisa Tomei (Margie Carlin) turns in another solid performance as Scott’s mom. She evolves from a mother who babies her kids to finally taking a stand and demanding more of her children and love interest. Every time Tomei is in a movie, the audience knows she’ll more than hold her own.

Bill Burr (Ray Bishop) goes toe-to-toe with Davidson as the film starts with their contentious relationship. It eventually grows as they need each other. I had never seen Burr play so complex a role where his character has a true arc. He handles it beautifully.

Bel Powley (Kelsey) plays Scott’s girlfriend and makes the most of her limited screen time. She’s often able to make the audience laugh and feel her pain as she struggles in her relationship with Scott.

The acting from the top down feels very natural and real, which makes the movie easy to watch and relatable.

Unfortunately, “The King of Staten Island” could have been that much stronger if it shored up its story, tone and length.

Apatow is famous (or infamous) for directing good films that are just a tad long. That doesn’t change here. “The King of Staten Island” comes in at 2 hours and 17 minutes, too long for a coming-of-age film. The funny part is even though it has that much time to tell its story, the film rushes through plot points. Character decisions and resolutions come too quickly, which don’t work for a film that seems realistic otherwise. It spends so much time building the first act that it has to squeeze the second and third acts together in order to not stretch the movie out any longer.

Also, while it has strong humor and dramatic scenes, “The King of Staten Island” struggles with tone. Its transitions jump too rapidly from comedy to drama that it’s difficult to get into a groove of taking in one or the other.

“The King of Staten Island” has flaws, but they don’t take away from Davidson’s incredible performance, the strong supporting cast and solid writing. A better balance would have just elevated it even more. “The King of Staten Island” also provides potential viewers with a unique decision. As the Universal film went straight to video on demand because of the coronavirus pandemic, it is available to rent for $20. That’s double what I pay to go see a movie in theaters. I like Davidson, I generally like Apatow and I’ve had a few months where I’ve mostly been watching programming on streaming services. It was a welcome change and a no-brainer for me. However, $20 is a lot of money to spend to rent a film for 48 hours. Even though I thought it was money well spent, that’s a steep cost for a movie that didn’t perfectly stick the landing.