Review: “Godzilla, King of the Monsters”

In 2014’s “Godzilla,” scientist Dr. Ishiro Serizawa (Ken Watanabe) acknowledged out loud what most of the film’s audience had gathered to see in the reboot of the legendary monster: “Let them fight.” Five years later, “Godzilla: King of the Monsters” delivers on the promise of epic fights among its titular kaiju and his famous foes.

The thrilling third film in Legendary and Warner Bros.’ MonsterVerse, released two years after the excellent “Kong: Skull Island,” roars to life in a spectacular feast for the senses. The popcorn flick abandons the serious tone of its 2014 predecessor and embraces the campiness of the classic Godzilla films. But as fun as it is, “Godzilla: King of the Monsters” prioritizes its kaiju battles ahead of its convoluted story and thinly drawn human characters.

The destruction of San Francisco in “Godzilla” awakened the world to the existence of giant mythological beasts, called Titans. Keeping track of them is the crypto-zoological organization Monarch, including Dr. Emma Russell, a scientist who has developed a device to communicate with the monsters. When terrorists kidnap Emma and her daughter Madison (Millie Bobby Brown) for the invention, Monarch pulls Emma’s estranged husband and grieving scientist Mark (Kyle Chandler) back into the fray.

As the terrorists use the invention to wake up more Titans, the magnificent monsters look to reclaim their rule over the Earth. One thing can stand in their way: Godzilla, who last protected the planet five years ago. The King of Monsters must face off against Mothra, a psychic moth; Rodan, a flying prehistoric reptile; and King Ghidorah, a three-headed dragon and Godzilla’s ultimate nemesis. As the Titans forge a path of destruction, Monarch and Godzilla must work together to save the world from total decimation.

“Godzilla: King of the Monsters” is a response to the biggest criticism of its predecessor: There wasn’t enough Godzilla. Gareth Edwards’ 2014 effort teased the appearance of the radioactive monster for most of the film before unleashing him in the final act. Under director Michael Dougherty, “King of the Monsters” doesn’t keep audiences waiting for the main attraction.

Godzilla, Mothra, Rodan and King Ghidorah go head-to-head in their gigantic glory in plenty of face-offs throughout the film. The triumphant action jumps around the world, from a Mexican village to an underwater city to the fiery finale in Fenway Park in Boston.

The film looks breathtaking, with awe-inspiring special effects and masterful cinematography. Scenes are bathed in blue, yellow and orange as Godzilla lets loose his atomic breath, Mothra raises her enormous wings and King Ghidorah rains down fire. The film even incorporates traditional musical cues for the monsters and clever nods to their lore, which franchise fans will appreciate.

While “Godzilla: King of the Monsters” thrives on its monster vs. monster action, its tangled plot needs a chart to keep track of it. The story gets messy as the movie needs a reason to move around the action. Some character motivations are questionable, and one character’s logic is full of holes. The film favors its monsters over its characters, who are underdeveloped.

Still, the likable cast delivers solid performances. The terrific Watanabe, who along with Sally Hawkins returns from the 2014 film, elicits the most emotional moment in the movie. Chandler, Farmiga and Brown capably convey the dynamic of a broken family still reeling from tragedy, even if the script doesn’t give them a lot to work with. As a Monarch employee, Bradley Whitford revels in the film’s campiness, spouting his lines with glee.

Let them fight, and fight they do. “Godzilla: King of the Monsters” satisfies moviegoers’ itch for kaiju battles, though at the cost of a muddled story. Despite its flaws, the latest film in the MonserVerse succeeds in setting the stage for the franchise’s next monster match-up, “Godzilla vs. Kong.” 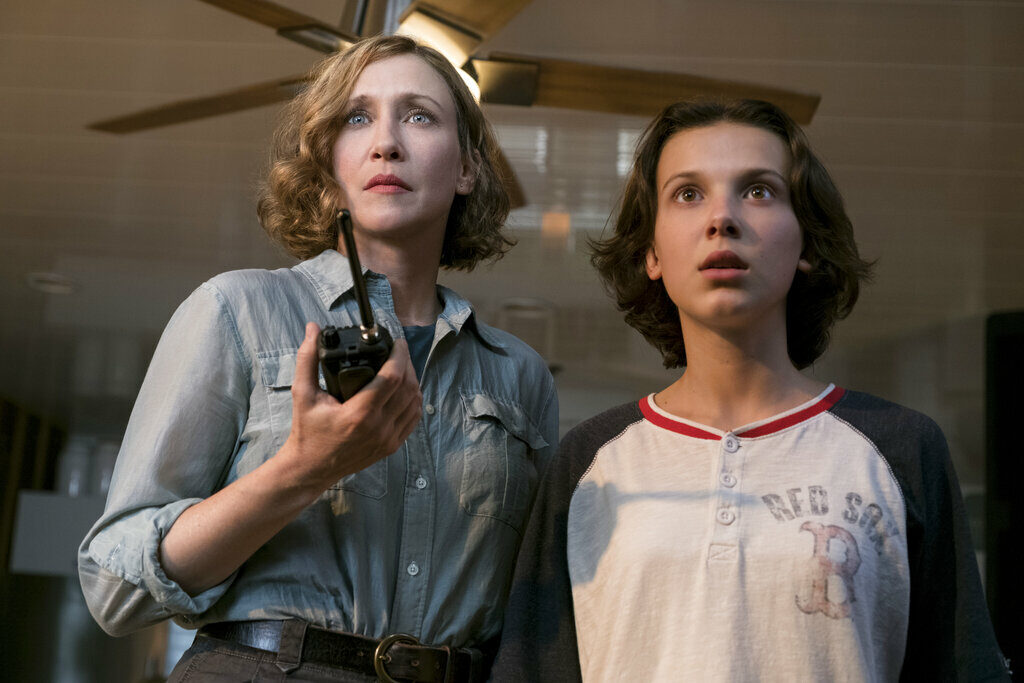 In 2014, Warner Bros. released a Godzilla reboot, which split audiences. Many believed the film teased Godzilla too much, saving him for the end battle. The film worked with its “Jaws” approach, but watching the trailer for “Godzilla: King of the Monsters,” it was clear the franchise would cater to its fans who criticized the 2014 movie. More monsters, more action and more screen time for its title character.

Things go wrong for Warner Bros. when it tries to course correct after fan criticism. That’s how it ended up with movies like “Batman v. Superman: Dawn of Justice,” “Suicide Squad” and “Justice League.”

The sequel throws two handfuls of strong actors Into the film, including Millie Bobby Brown, Vera Farmiga, Kyle Chandler, Ken Watanabe, Sally Hawkins, Bradley Whitford, O’Shea Jackson Jr., Charles Dance and Thomas Middleditch, only to give them nothing to work with. The dialogue brought on eye rolls, character motivations proved baffling and the predictable plot failed to hold the audience’s interest. Nobody acts well because how can they with such an embarrassing script?

“Godzilla” (2014) wasn’t known for its great human characters and the plot wasn’t anything elaborate. It was the weakest part of the film, especially when it underutilized its best actor, Bryan Cranston. But it also knew the audience needed a few central figures to follow throughout the film before giving way to the spectacle of the climax. With all those additions to the cast and new characters, it was difficult to care about anybody.

The sequel did have breathtaking visuals and a nice callback to a few classic Godzilla themes that do their very best to try to save this film. Mothra’s character design is stunning. That effort also should have gone into other parts of the film.

Once again, Warner Bros. failed when it tried to cater to its fans instead of remaining confident in its product. It dumbed down its material to please the moviegoer who will simply complain more about this film. “Godzilla” (2014) is a good movie weighed down by unnecessary criticism. The studio fell into the trap just like it did with “Man of Steel” in 2013. Warner Bros. needs to stop taking criticism so personally and just make good movies.

“Godzilla: King of the Monsters” has dazzling visual effects and a beautiful score, but they are wasted with a laughable script and a lack of creativity.